Contributor
I think the most I.portent thing to take from the last two seasons for Hulkenberg is that he's being beat by Sergio Perez. Now either Perez is as good as we all thought he was way back or Hulkenberg Isn't.

RasputinLives IMHO A little bit of both

Valued Member
I can't help feeling if they were all using 2008-period Bridgestones that Nico would be a multiple race winner by now. Unfortunately his driving style is one of the most penalised by the current tyre specifications.

It says to me he's not single minded enough to make a big career decision and wants to play it safe.

Valued Member
Nico will make a very good, even excellent, endurance driver and should make the move sooner rather than later.

Mclaren have Van Doorne for next year probably

Valued Member
This a good weekend for him to ditch the Martini belt?

Hulkenberg leaving Force India at the end of the season, probably joining Renault.

Great news for Hulkenberg moving to renault had to take the risk instead of stagnating & could end up top of a list "best drivers never to win f1 race" or "greatest unfulfilled talent" as hulkenburg shouldve been in a top team by 2013 or 2014. How guy of his talent never linked with top team baffles me as he was 1 of the greatest drivers in youth categories in recent years 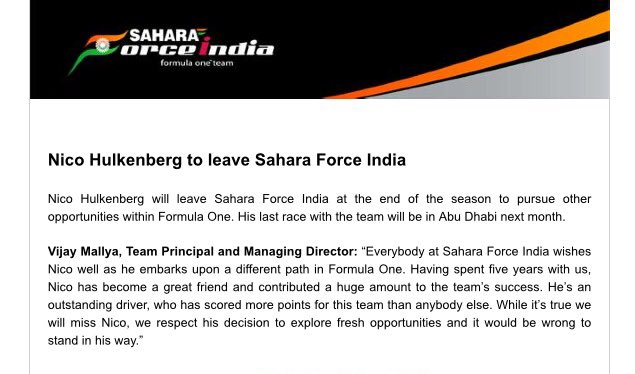 Premium Contributor
Well with his luck, I'd put an bet on Force India to get a win next year!

Sometimes being a great talent is youth categories doesn't guarantee that a driver will succeed in F1. The opposite is also true.

I have a feeling that this move will be great for Nico in more ways that just being able to finally win a race. Renault has just come back to F1 after their hiatus and they can only get better. Last time they did it, they ended up winning back-to-back WCC and their first year back (2001) was very similar to what has happened this year, in one word forgettable. I'm under the impression that Renault is betting on Nico to be "the one" who bring Renault back to the top. Maybe not the one who at the end gets the glory and the championship though.

Contributor
Good. Let's hope Renault start getting their act together in the next couple of years! The PU is at least starting to look the part...

Unfortunately I don't see it happening anytime soon... Renault themselves have been saying getting back into anything like full competitiveness will be a multiple-year job. I fear Nico for the foreseeable future is merely trading an above-average midfield car for a poor car...
Last edited: Oct 14, 2016

Contributor
Might be a smart move for Hulkenberg but if he has Ocon as a team mate then he might not get it all his own way.

They can be 4th best team but will be overtaken by Mclaren who are coming back and later on Renault.

Whenever Renault have been in Formula 1 it takes about 3 years to get it right - they did it in the turbo era and should have won in 1983 no doubt. They were on the pace with Williams by 1991 after coming back in 1989.

When they came back in 2001 they were woeful not similar to now with their radical 111 degree engine and then they started in 2003 they had a race winning car but by 2005-06 they were the leading team.

I think Sergio Perez will regret turning them down

Last chance saloon for Hulkenberg and a bumper pay .. really an offer he could not turn down

Valued Member
I know I shouldn't be surprised but Hulkenberg has been very impressive in the opening races of his time at Renault.

I am impressed that he has come in and asserted himself as the No 1 at Renault and really thrashed Palmer. I just hope he aint a Trulli where he is fast for one lap but does not seem able to sustain it for race pace. I hope this is down to the Renault not being good on it tyres and will find a way to this

Yes he may have less points than both Force India drivers - the team he left but he is showing his class when you consider Magnussen did not want to stay and Perez did not want to join both citing leadership issues . He has taken this opportunity to show himself

The only question remains what if Alonso is his teammate next season seems to be the paddock rumours?
Last edited: May 1, 2017

Il_leone said:
All he needs is podium I think once he starts getting those he may well really excel....
Click to expand...