Il_leone said:
3) People said he beat Kubica 2 years out of 3
Click to expand...

He also actually did.


Il_leone said:
1st year you would expect him too given it was Kubica's first full season
Click to expand...

Yeah and you'd expect Alonso to dominate the rookie Hamilton but things don't always go as expected. Kubica's since shown himself to a phenomenally talented driver and he already had half of 06 and plenty of testing, so don't be disingenuous and act as if he was some fresh from the cot, inexperienced virgin of a driver. Heidfeld beat him. Well done Nick.


Il_leone said:
2nd year Kubica was leading the championship and the team opted for a bizarre decision to support Heidfeld up to speed and concentrate for 2009 .... for your information his performance to Kubica post Canada was 33pts Kubica to 32 pts Heidfeld which included him benefiting from Hamilton's demotion
Click to expand...

Probably because they believed they had a good thing going for 2009 and good could have done with the money from constructors points to support a title challenge. Robert lead to championship after Canada due to a couple of freak results, and it was a team decision that Kubica won that race and not Heidfeld.

You could replace Nick's name in that quote with many driver's names and get nothing.
Name a race where Kubica made people grab attention then? I'd give him Brazil and nothing else.
Malaysia was very memorable for Nick, as were Belgium and Abu Dahbi, seen as you asked.


Il_leone said:
That Jordan season where he drove .. he did not have sponsors... Pantano had to bring sponsors into the team to earn his drive and part fund Heidfeld's wages as well
Click to expand...


Il_leone said:
As for his season at Lotus Renault - he's been talking up himself that he was still good enough to be world champion.
Click to expand...

Show me a driver who doesn't believe he can be champion and I'll show you someone who shouldn't be in F1.


Il_leone said:
So here's a lifeline at being the team leader which he failed to deliver because he was up against Kubica as the benchmark from previous season to PEtrov
Click to expand...

If you actually pay attention to races, rather than just stats, you'd know that he didn't fail to deliver. He got a podium on merit early on and was regularly running top five. He equaled Hamilton's 2012 Barcelona drive. He had loads of spare tyres but if not testing or qualifying and having all the tyres were an advantage, everybody would do it. He also didn't have the fastest car which Hamilton did. He drove a stormer in Canada before Kamui went banzai.

I still think if he was not German right BMW would not have made the bizarre decision to sort him out rather than back Kubica who was championship leader in 2008
Click to expand...

I've already explained why this is bias nonsense.


Il_leone said:
He had MArio Thiessen to thank for resurrecting his career briefly from Jordan first to get him to Williams and then signing him up to BMW
Click to expand...

He also has his own talent to thank, which more than justified Mario's decision.


Il_leone said:
I remember when Villeneuve was his teammate and then they threw Kubica a chance and the word was Heidfeld has suddenly found 0.5 seconds a lap..where was the speed previously
Click to expand...


Il_leone said:
I am sure if Heidfeld was hussling the other 4 teams regularly like Kubica did in 2010 he might have been on the grid still
Click to expand...

Oh and I've never claimed he's great at PR, simply that he's a very talented F1 driver. Hardly a controversial opinion, and getting a drive based on PR over talent isn't something to be proud of.

Ron chose Raikkonen over Heidfeld and, as a massive Heidfeld fan, I'll tell you it turned out to be the right decision. Montoya less so.

How does Heidfeld stack up against most recent team-mates (Kobayashi and Petrov)?

Well despite everything going against him, he was two points up on Petrov when they dropped him. Similar to Hamilton v Button in 2012, the two point margin flattered the lower scoring driver.

I honestly don't know who scored more out of him and Kobayashi. 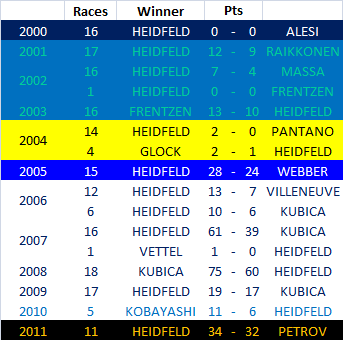 Staff member
If I'm reading that correctly, he has never been beaten by a team mate, which is as much as you can expect from a driver.

Valued Member
Brogan - Not quite, sorry. The driver to finish higher in the comparison is listed in the third column.

However, only twice in eleven attempts was Heidfeld beaten by the team-mate he started the first race alongside - by Frentzen in 2003 and by Kubica in 2008.

Valued Member
He was beaten by Glock, Frentzen, Vettel, Kubica and Kobayashi, but has beaten Raikkonen, Massa, Webber, Kubica and Petrov.

The thing that sticks in my mind, is that Kubica was regularly seen (rightly so) as one of the leading lights in F1, yet Heidfeld seems to have been overlooked, certainly for the top drives. It does make you wonder if there is more to it than initial observations would indicate.

Staff member
Doh!
Must have had a bit of a moment there...I could have sworn I saw Heidfeld ahead on all of them.

The Pits said:
He was beaten by Glock, Frentzen, Vettel, Kubica and Kobayashi, but has beaten Raikkonen, Massa, Webber, Kubica and Petrov.

The thing that sticks in my mind, is that Kubica was regularly seen (rightly so) as one of the leading lights in F1, yet Heidfeld seems to have been overlooked, certainly for the top drives. It does make you wonder if there is more to it than initial observations would indicate.
Click to expand...

I feel like I should point out that Glock scored one more point over the four races they were together, but it was only four races. Hardly truly representative.

Also, he and Vettel were teammates for one race. It was Vettel's debut and Heidfeld out qualified and out raced him until he fell foul to a hydroulichs failure, so doesn't count as being beaten by a teammate in my eyes.

I should also add that, judging from a recent interview I read with Pedro De La Rosa, Sauber doesn't sound like an easy team to just slip into. Apparently there's a lot of simply blaming the drivers whenever something doesn't work.

2008 so BMW allow Kubica the lead driver to win and then suddenly he is in the lead of the championship they don't want to back him more... I'd like to see Mario say that to Schumacher or Alonso then ?

Up to Canada Kubica was the revelation and driver of the season ..he was getting the BMW amongst the Ferrari's and Mclarens


My point about half a second a lap Heidfeld suddenly finds against Kubica ?

If he can go half a second quicker when a new driver was put in the other car then as team boss or onlookers why could not he do that throughout the season unless he realises his cushy position or status was suddenly under threat from a supremely quick driver ?

Only because he is German ... if he was not I don;t think MArio would have bothered asking Frank to consider him

The fact is someone else had to bring money in to pay him because he could not bring sponsors himself ...you would have thought Mercedes might have at least done something to help him

How many drivers get backed by a car manufacturer like Mercedes?
Ron Dennis has seen him from the F3000 team in the West Mclaren livery to F1 testing and still did not consider him to be the future of Mclaren . The driver Mercedes backed to be the new Schumacher pretty much
--------------------------

he spent too long at Sauber and ruthlessly was sacked after 2003 season...people were wondering what did he gain from staying in a midfield team going nowhere

Button had to scrap his F1 seat and got harsh dose of reality at the back of the grid with Flavio managing him..the 2001 experience toughened him up and the season afterwards where he was alienated for not signing a new contract

Il_leone said:
Where there is a difference with Button there is an inner steel and he does not get flustered or downbeat like with Heidfeld who you feel does not cope well if he was the end of a thrashing from his teammate or the situation being against him
Click to expand...

I'm pretty sure Button gets pretty downbeat and flustered - the run from Bahrain to Spain this year and the whole of 2008 spring to mind.

I think you should just give it up, you keep reiterating the same points all over again.

We get the point, you think Heidfeld wasn't good enough, while the majority of the people think the opposite.

Contributor
Everyone needs a beard.

Slyboogy
A combination of not good enough and not managing his career well .. he aint the only one there are plenty of others - Barrichello, Fisichella, Truilli, Montoya etc