Contributor
Police are seeking a slightly disheveled man in his mid-twenties in connection with the theft of 66 trophies from the Red Bull Racing factory in Milton Keynes. The thief was caught on CCTV and there is a reward of 25,000 cans of Red Bull on offer to anyone who can identify the thief and bring him to justice. 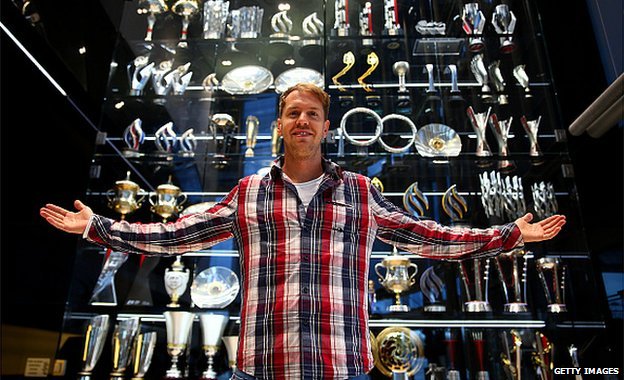 The suspect was described by some as a blonde blue and eyed boy although others laughed off this description as outdated. Suggestions that the thief bore a passing resemblance to former Red Bull driver, Sebastian Vettel, were discounted by officers who said that the man they had seen "looked nothing like a four-time World Champion". They said that he has a curious green tinge to his skin, especially when he was observed close to the posters showing Danny Ricciardo's 2014 race wins.

Rumours that trophies won by Mark Webber had been stolen have been categorically dismissed by Milton Keynes Police, who added, "the thief would have had a hard job finding any of those. They were well hidden under a pile of dust in the janitor's cupboard".

The only employee at the factory at the time was a Mr Newey, who was unaware the a 4x4 had crashed through the glass doors to the factory and had failed to raise the alarm until three hours after the event occurred. Police quickly discounted any suggestions that Newey was somehow involved, saying that they were aware that he often worked late. "Many of Mr Newey's colleagues have informed us that he is a quiet man who often appears lost in his thoughts. We are told that a bomb could have gone off in his office and he might not have noticed such is his concentration on the RB11 machine that he is designing."

Police are now turning their attention to a note found at the scene of the crime. Police have refused to confirm or deny this, but sources tell us that it was a ransom note informing Red Bull that if they wanted their trophies back, they had to deliver an RB9 to an address in Northern Italy, now and "not when he's gone".

The note was rather cryptically signed, "from SV, MA & BE" although police are unsure who these characters are. Inquiries are also continuing to identify the source of the Marlboro cigarettes found at the scene.

Police have warned 'armchair detectives' to ignore any suggestions that a mysterious Austrian gang were the real perpetrators saying, "there is no evidence to back up the wild theories going around the internet that the theft was a PR stunt and that the trophies are now gathering dust in a secret janitor's cupboard in Salzburg."