Football How did you end up supporting your team?

So happy! RVP and Henry could be unstoppable, with the amount of chances Arsenal create!
Click to expand


But what about Gervinho? Arguably better than both of them...

Jos the Boss said:
But what about Gervinho? Arguably better than both of them...

Of course.... the way he took his goal in the Wolves game had me convinced!

mjo said:
Of course.... the way he took his goal in the Wolves game had me convinced!

Contributor
I was always a Celtic supporter when I was young, either Celtic or Rangers around here. I was brought up in a Celtic/Man United family, from cousins to friends that's who most supported, me being the off one out. I didn't support Man U Shited I detest that team, I liked Celtic because every rangers fan you met was a complete arse.

I started to support Hibernian, they had a similar strip to Celtic where the underdogs and not a bad team.

And now, I have a strange thing for Italian teams. I support Juventus, like both Milan clubs, (mainly because of their strips) and like the underdog Fiorentina.

I am an American who's half Italian on my mom's side and half English on my dad's side, plus various Northern European nationalities I've traced back to the 1600s. My family name, Perry, has been traced back to Hampshire, England. As a result, a few years ago, I decide to follow Southampton FC up the ranks. I am officially a Premier League supporter this year.

For my Italian side, I chose to follow Inter starting back in 1999, when Christian Vieri and Roberto Baggio were on the team. They were my favorite national team players back then.

I also support Inter for as long as I can remember but ever since Toronto FC is a franchise I divide my affects between the 2 clubs. There's something about the Reds that really pull me, maybe their perpetual underdog role

Staff Member
Valued Member
Well, for me it was simple, I got myself a Man Utd shirt from Sports Direct and a Sky Sports subscription and I can now say I'm a fan of the greatest team in the world. Ha Ha, we've won more titles than you, na ne na ne na na !!!

Nah, actually, I'm a Bristol City fan. and have been since I was about 15 (before that I wasn't really into football as I was always and still am, a Rugby fan). I gave a mate of mine a call one Saturday to see what he was up to and he said he was goind down Ashton Gate to watch the City. He asked me if I wanted to come along so off I went. From then on it was City all the way. For a couple of years I was a season ticket holder but both lack of time and lack of money put an end to that.

I guess I should also include the San Jose Earthquakes as another team I follow. I went to the very first MLS game, which was San Jose (Clash) versus DC United.
Unfortunately, even though San Jose won a couple championships and are on track to win another, they largely go unnoticed around here.
I think in America our women's national team is recognized more than the men.
David Beckham is probably the most recognized player in MLS. Then, maybe, Landon Donovan.

Also, I think you'll be glad to know, even as an American, I knew what sport you were talking about when you labeled this thread "football".
Otherwise I'd start talking about my San Francisco 49ers.

Ha! Funny you said that FB. When I had decided to follow a Hampshire team a few years ago, I asked a co-worker of mine who's from England as in an Aston Villa supporter. I think Portsmouth had just been relegated out of the Premier and Southampton was two levels below.
My first inclination was to pick Portsmouth since they were closer to the Premier, but he suggested Southampton was on the up even though they were lower. Sorry to all Portsmouth fans, but I went with Southampton and have been following their climb ever since.

Valued Member
Bah! When Pompey have fans like this, how could you? 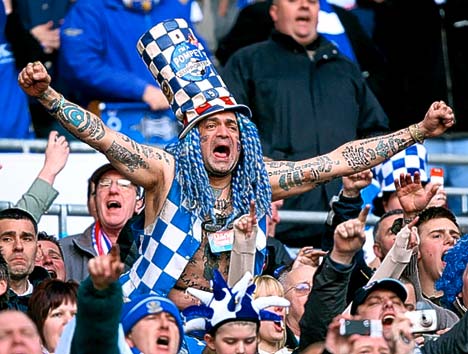 For the few of you who don't know this is John Anthony Portsmouth Football Club Westwood (yes, that is his full name). And when he's not being a loony at Fratton Park he's an antiquarian book seller. So never judge a book by it's cover...

Have to resist wearing my red and white striped t-shirt

Valued Member
FB - I heard he was playing on Saturday.

I ended up supporting Scotland because I'm from Scotland.

Nah when it comes to club football I'm a footballing neutral, that way you can appreciate the game more without worrying about your team losing. I do however have a few soft spots for certain teams, such as Leeds who I desperately want to get back into the Premier League as the way they went down was pretty sad to say the least.

Bus Stop Chicane said:
I I do however have a few soft spots for certain teams, such as Leeds who I desperately want to get back into the Premier League as the way they went down was pretty sad to say the least.
Click to expand


Gotta love a Leeds fan. I have great hope for us this season if we ever get rid of Master Bates.

As for how I became a fan, naturally as its my home town team it was the 1st game I ever went to, one of my earliest memories was back when Bremner was running the team. My dad who worked down at Elland road most match days managed to get me and a few friends to join in with a training session.

Happy days back then!

Contributor
I'm a Wolves fan, just because they showed great heart under Mick McCarthy, their incredible survival in the 2010/2011 season. Their top is a nice colour, their badge is awesome, and they are the underdogs with great atmosphere with great fans. I remember when the team lost a game 5-0, instead of boo-ing and making the players feel even more miserable, they got up and applauded them off the field (not sarcastically).

Other than that, I support Juventus, since well, I can't remember. My favourite player was Del Piero, the guy was magic, also Pavel Nedved too, a player that was very underrated until the 2003-2004 seasons where he finally got some recognition. I remember waking up early morning and watching Football Italia on Channel 4, the Italian league back then was in it's prime, how I miss those days. Now I rarely get to watch it.

Contributor
Slyboogy Because the Italian league is now, for the need of another word, shit.

Contributor
My family's from West Wales so at heart I am a Jack (Swans fan) but before I was able to understand that you could play a ball game with just your feet my Mamgu (Welsh for Grandma) visited from London and brought a football team plaque for each of my brothers and me, I must've been about 5. The one given to me was the Arsenal one and I've been a fan ever since. I used to watch The Swans in my teens when they were in Div1, feeling terrified as the concrete stand rocked underfoot, great days.