Hill not satisfied with Silverstone "Arena"

Valued Member
Under a rather OTT "Hill Blast" headline in the Daily Mail Damon Hill has commented on the compromises a modern F1 circuit design has to achieve to meet the financial hurdles imposed by FOM. In the article Hill is quoted:

'If you are asking me to say it's fantastic, I'm afraid I am not going to do that. I am not satisfied that we will be providing the best facility we could.

'More money goes out of the sport than comes in. It means we have to be as tight as a duck's backside. We need every penny to survive. You end up having to do things you don't want to. It is very frustrating.
Click to expand

Richard Phillips, MD of Silverstone is a bit more up-beat:

'Some will miss not seeing modern cars accelerating through Bridge, but we have to move with the times and continue to look at ways to improve the overall experience.

'The new layout will bring a new challenge for drivers and enable fans to get closer to the action.'
Click to expand

I presume this means the layout is designed more around fitting in extra grandstands rather than building a circuit which is a challenge for the drivers and promotes more overtaking. I suppose we will have to wait and see, what a shame Donington fell on it's face!

What is more frustrating for me though is the negativity in the Mail article and the lack of detail. I presume at the launch of new circuit layout the President of the BRDC and MD of Silverstone said far more than the 3 or 4 sentences quoted but the Mail chooses to publish the most negative ones. Thus it always was...

For those that haven't see it, below is the new track:

Staff Member
Premium Contributor
Not shown in the picture is the fact that the proposed new start finish line is supposed to be before that right hander where abbey used to be. This will feature a new "Bernie Friendly" VIP area for the chosen few pit lane.

So those people (Sorry Geoff) who have tickets for Copse could be denied the sight of the cars streaming off the start line and hammering into one of the fastest corners on the track.

It does seem that the BRDC are some of the most vocal in the anti FOM/CVC/Bernie department. Unfortunatly there are too many tracks/goverments willing to pay the kings ransom so complaining means nothing to Bernie because he just shifts the show elsewhere.

The important thing is that there is a British GP. Donnington may have been a good venue in terms of racing but I thought the facilities to host the race were always going to be lacking. The park and ride scheme sounded like a total nightmare.

Valued Member
Mmm, well, if it's what's required to keep the GP then I suppose it's fair enough.

The new layout doesn't exactly inspire me but I didn't really have any strong feelings about the bit of the circuit it has replaced either.

It's good to see Damon being honest about the motives though. Clearly, the Arena is intended to increase the capacity of the venue and maximise revenues. At the moment Silverstone sells out for the GP and would dearly love to lever cash out of the hands of those who are currently unable to get in. The two German circuits have had revisions for very similar reasons in the past decade.

While the purist may be unhappy, the circuit owners have to be pragmatic. If Spa didn't already exist, for certain nobody would build it now.

FB said:
What is more frustrating for me though is the negativity in the Mail article and the lack of detail. I presume at the launch of new circuit layout the President of the BRDC and MD of Silverstone said far more than the 3 or 4 sentences quoted but the Mail chooses to publish the most negative ones. Thus it always was...
Click to expand

Lack of detail in a Daily Mail article?! Well I never!

Valued Member
If the drive for spectators is all it is about (to fund the cash hungry beast that is FOM) is this what we will end up with? 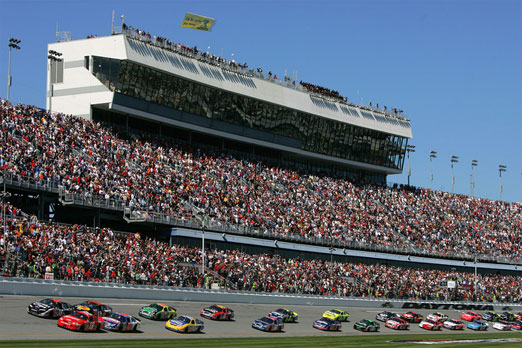 One other question FOM, I believe, give about half of their revenue to the teams. With budget caps due to be imposed at some time (are they still?) will the pay outs to the teams reduce? If so will Bernie reduce the price for a Grand Prix or will he just pocket the extra If they get the same what will they do with all that spare cash?

Contributor
- That's it, I'm going to tell my Mummy on them!