Danica Patrick sitting on Pole at the 500

Supporter
The headlines write themselves don't they?

In case you don't get ESPN beaming to you 24/7 on multiple devices scattered throughout your household, you may have missed the fact that Danica Patrick became the first woman to capture a NASCAR Pole Position. It happens to be at their crown jewel event as well. The race will be another story, but you better believe that interest has risen greatly to see what Danica will do at the start.

Contributor
It was in my newspaper yesterday & I was going to post...'Lets hear it for the Girls'
Her flying lap was 196.434mph..POLE....brilliant....
She is starting alongside four time Nascar champion Jeff Gordon, who also smashed the 196mph barrier......He said " I can say I was the fastest guy today"
Good Luck Danica....

Not to take anything away from Danica but its all about the car in qualifying at Daytona. Props to her for the car setup though. Somebody on that team did something right because they were all fast. And I hate all these people saying its not where you start that matters its where you finish. Well duh people! Except its easier to finish up front when you start there! Theres a reason why they do this, even though at Daytona its a lot easier to move through the field, in fact it can be done in about 3 or 4 laps out of 200. But still. Congrats to her, wish I could watch the duels tomorrow and hoping I can watch the race Sunday.

Contributor
Pass the box of man sized tissues if you please. this girls got it all.. 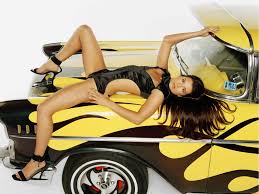 Contributor
I hope they will be okay...

I have read that all of them are in stable condition so that's good news at least.

soccerman17 said:
Not to take anything away from Danica but its all about the car in qualifying at Daytona.
Click to expand

Not entirely soccerman17. To quote Tony Stewart, her car owner and the 2011 champion and still one of the very best, "she's soooo smooth and you have to be smooth around here to find speed". She learnt to be smooth during her years in IRL but sadly it will probably cost her during the race. She has everything, looks, skill, bravery, but there's still one small thing missing that's actually a very big thing in NASCAR, aggression. As much as her fellow drivers love her and recognize how good she is for the sport, they'll bully her when they start bump drafting during the race, but make no mistake she'll learn that skill too. Not easy. After years of running wheel to wheel at 200mph plus, only inches from another car alonside you on the straights and in the turns, she now has to learn how to make contact at the same speeds without crashing. It will come but not overnight. The girls wonderful and quite probably the best thing that's happened to motorsport, any motorsport, in terms of attracting interest from way beyond the normal fan base. One other point worth considering for Danica Patrick, because she's a female in a man's world, the bar has always been set that much higher for her to gain acceptance. Even with her pole position it will probably always be like that until she can win consistently. I hope the very best for her.
M

Contributor
Me to Kewee she may be portrayed as a glamour puss (She is very beautiful.) but she is also a true and excellent racer, she has the ability to put some of the men in the sport to shame.....

I have been watching her for a long time and it makes me laugh how upset some of the drivers get when she out performs them especially her team mates....

You could see what was to come in her first year Mephistopheles. If it weren't for needing to conserve fuel a couple of laps from the end she would have won the Indy 500 at her first attempt. I still have this wonderful image of Danica when she was forced out of another Indy through no fault of her own. Filmed from behind walking away from her car, tiny little thing in this huge crash helmet, she started stamping her little feet as she was walking. Hahaha. How many times have we seen little girls do that when they get shitty. It was absolutely priceless. The girls fabulous in every way but make no mistake, she's tough as hell also.
Interesting point with the American scene, with the exception of one well known family which shall remain unnamed, the sport including IRL as well as NASCAR, is virtually absent of prima donnas. Most American drivers, and Danica fits the mould perfectly, are pure racers. Maybe it's because they have other things to worry about, like staying alive.

I know serious things are happening in the US right now but just a little humor from a couple of years ago. For those that don't know the names. Rusty Wallace, another top ex NASCAR driver was invited to sit on the pit wall of one of the top teams during an IRL race. Asked if he'd like to have the opportunity to drive one he answered "I wouldn't get out of the Electric Chair to hop one of these things".

Kewee yes her being smooth does have a small affect and is probably why she was able to beat Tony and Ryan Newman, her teammates who had to have similar setups. However, I wouldn't say she lacks agression. She's had many confrontations with other drivers in her career in Indy and NASCAR. And this:

soccerman17........The comparison I'm making is related to the difference between IRL where she ran so well, and where she finds herself now. Open wheel racing at 200mph on some of the most dangerous circuits in the world requires sublime skill, making sure you don't touch wheels for starters. The video you provided from Kansas is very different to bump drafting in NASCAR at 200mph on the two Super Speedways, Daytona and Talladega. As I said she will learn and I wouldn't be at all surprised if she becomes very very good at it but it will take time. She didn't survive long enough to experience the last 20 laps at Daytona last year and she didn't run a Sprint Cup car at Talladega so there's another last 20 laps she's yet to survive. Believe me I want her to reach the very top but she will find the final laps on the two super speedways very very tough. She will have done her homework and has a wonderful teacher in Tony Stewart, but the level she's reached now is a whole new world for her. If your able to get coverage in the UK make sure you watch the last 20 laps, they'll be breathtaking and I hope Danica Patrick is in the leading pack. If she is, that on its own will be a huge achievement. There's a saying in the States that applies to the Indy 500 and the Super Speedways NASCAR run. Survive until the last 20 and make sure your on the lead lap because that's when the race starts.

Further good news from Daytona. The lives of the two critically injured fans are no longer in danger thankfully. There's talk of moving the spectators further back from the fence in the future. It's almost impossible to contain cars that heavy traveling at 200mph when something goes wrong but it might be worth a try. The accident was caused by the lead driver going for a block to try to take the win. He got bumped and all hell broke loose. Thats part of NASCAR and is a tactic that is used frequently at Talladega and Daytona and will no doubt be used tomorrow though the end result is not usually as dramatic as this has been.

Past the halfway point at Daytona. Danica currently sitting in third. Has become the first woman to lead a lap about 6 or so laps ago. She's stayed in the top three for most of the race so far. dropped back after the first pit stops to about 8th then worked her way back to the top three. Cars strong and she hasn't put a foot wrong so far. One accident so far. took out about 5 cars including Tony Stewart, Patricks car owner. A shame, he was in the wrong place at the wrong time. 88 laps to go, Patrick still sitting in 3rd.

So far she is doing a great job......I worry a litle about her exit after pitstop.

Drivers who quit during the season
2

Coming from behind to win the Championship