Bumping an old topic, as the intentions of F1's new owners Liberty Media have made it relevant again.

One potential issue I have with a potential budget cap is that it significantly increases the risk of lopsided season results. A budget cap will mean that if one team "gets it right" over the winterbreak and ends up with a significant advantage over the competition, the other (big) teams will not have the budget room to do the necessary extra development to make a u-turn on their design and catch up. This is similar to the way the token system helped Mercedes keep their advantage over the past three years.

On this grounds alone I think a budget cap would be a terrible idea for F1.

Contributor
The flip side is that without being able to throw 100's of millions at development no 1 team should find that huge advantage in the first place.

Contributor
For me, the most worrisome thing is that F1 has become such an expensive proposition that only major corporations can afford to take part. Corporations are always cost-benefit ratio driven, so once that ratio enters territory that no longer makes sense to a corporate entity, they will bail. Once one leaves, that will lower the perceived benefit other derive from participating, so an escalating exodus will likely be the result.

In today's world, what would be left in F1 if the corporations all left in the span of 1-2 years?

Greenlantern101 said:
The flip side is that without being able to throw 100's of millions at development no 1 team should find that huge advantage in the first place.
Click to expand

Actually, not necessarily. Getting such a huge advantage is mostly is having the right idea, and then being able to develop it. One advantage that the big spending teams enjoy, is that they can pursue many ideas during development. Consequently, with a bunch of big spending teams around chances are small the one finds an idea that the others have missed. (It can (and does) still happen) With smaller budgets teams get to try less options and it becomes more random.

siffert_fan said:
For me, the most worrisome thing is that F1 has become such an expensive proposition that only major corporations can afford to take part. Corporations are always cost-benefit ratio driven, so once that ratio enters territory that no longer makes sense to a corporate entity, they will bail. Once one leaves, that will lower the perceived benefit other derive from participating, so an escalating exodus will likely be the result.

In today's world, what would be left in F1 if the corporations all left in the span of 1-2 years?
Click to expand

We had something similar in 2008-09. Even if the running cost is no longer tenable, the asset has a value and is likely to find a buyer, for the right price (with long-term TV contracts and circuit agreements, while sponsor and commercial income may fall, it's unlike to go to zero overnight IMO). Hence Honda became Brawn, BMW Sauber became Sauber and Renault became (sigh) Lotus. Stick a freeze on the engines and everyone can carry on as before for $80m/year or so. Such cycles are probably healthy for the sport, albeit result in a lot of redundancies and misery on a personal level.

Premium Contributor
Ive said it once and I'll say it again: 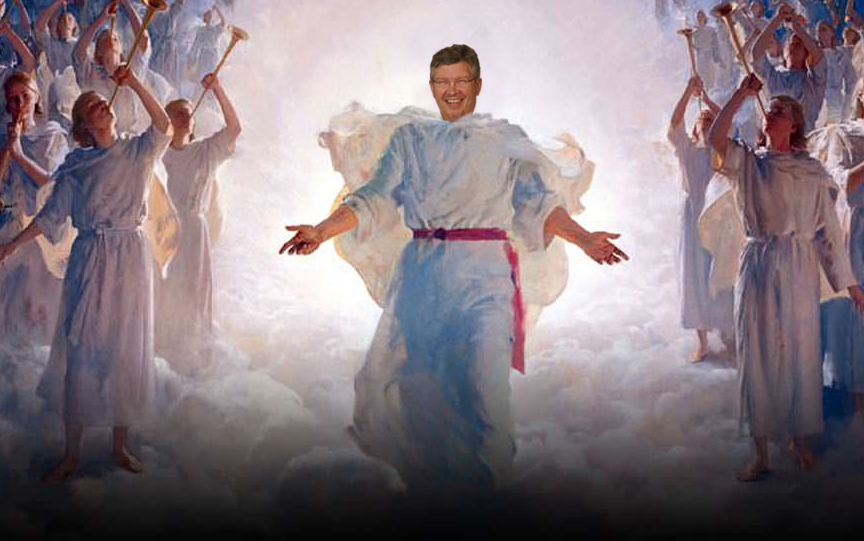 "The new owners have no racing feeling -- they just want to make money," Weber added

Valued Member
Unlike the private equity fund, banks and media companies that owned it before?!

Contributor
vintly I Don't really get when Ross Brawn suddenly became loved by the masses. He was hated by fans when at Benneton, hated by fans when at Ferrari, he then bought the Honda team for a quid and sold it for millions. He is known for his bending of the truth and rules to fit his own agenda. Isn't he just the latest version of Bernie?

I think "hated" might be a bit strong a word but I'm equally baffled at the view as to why so many have developped a tendency to view Ross Brawn as some kind of savious of F1?...

Premium Contributor
RasputinLives That's interesting, I had no idea he was seen that negatively, as well as positively. I've certainly never hated him, but accept that people have different views. Personally I see him very likeable, affable and quick to smile, but also he carries the gravitas to be able to Get Things wgich I hope will be for the good of F1. By the way, why is making millions out of the sale of Brawn F1 a bad thing?

The 'saviour' tag is as much a reference to the direction F1 has been going recently, as it is to the hope that he can reform it for common good of the sport.

Another Bernie? There can only be one!

Valued Member
I've never warmed that much to Ross Brawn, always felt more of an affinity to Mr. Newey in terms of personality and approach.

But, there is always a very strong argument for the 'poacher turned gamekeeper' - Brawn stretched the rules to their limits in F1, knows intimately how designers and engineers are going to interpret a set of regulations, and therefore I can't think of anyone better for the role he now holds. The same principle applied well to Charlie Whiting and Herbie Blash, although I know many will disagree with me on that.

Clearly it's important that he acts impartially and is free from influence and favour; since he's worked in around half the teams on the grid, his friends and enemies are probably roughly equally distributed. Hopefully.

vintly said:
By the way, why is making millions out of the sale of Brawn F1 a bad thing?
Click to expand

Well I mention it because it's the exact sort of thing that Bernie would have done.

I actually think their careers have a similar pattern and I actually think Bernie was probably viewed in a very similar way that Brawn is now when he took the reigns of F1. It's just interesting that he is viewed so much as a saviour when Bernie is hated so much when I see a similar sort of individual.

A former team owner takes over the reigns of F1 from a figure who is said to have driven the sport into the ground in order to modernise it. In the words of Shirly Bassy and the Proppelerheads 'it's all just a little bit of history repeating'

I do think he'll do a decent job but maybe not in the way people are expecting.

Contributor
I still cannot get used to the astronomical amounts of money it takes to participate in F1 today.

I can remember back in 1988, when Prost and Senna were trouncing the opposition while driving the all-conquering McLaren-Hondas and the other teams were all saying that it was due to Honda spending the ungodly sum of $3 million on engine development!

I doubt that that sum (approx $6 million in today's dollars) would pay for the tyres today.

Valued Member
This may be a bit sad but I found some numbers going back to 1968 for the costs of running a team in F1. It went up to 2013.

This is the plot: 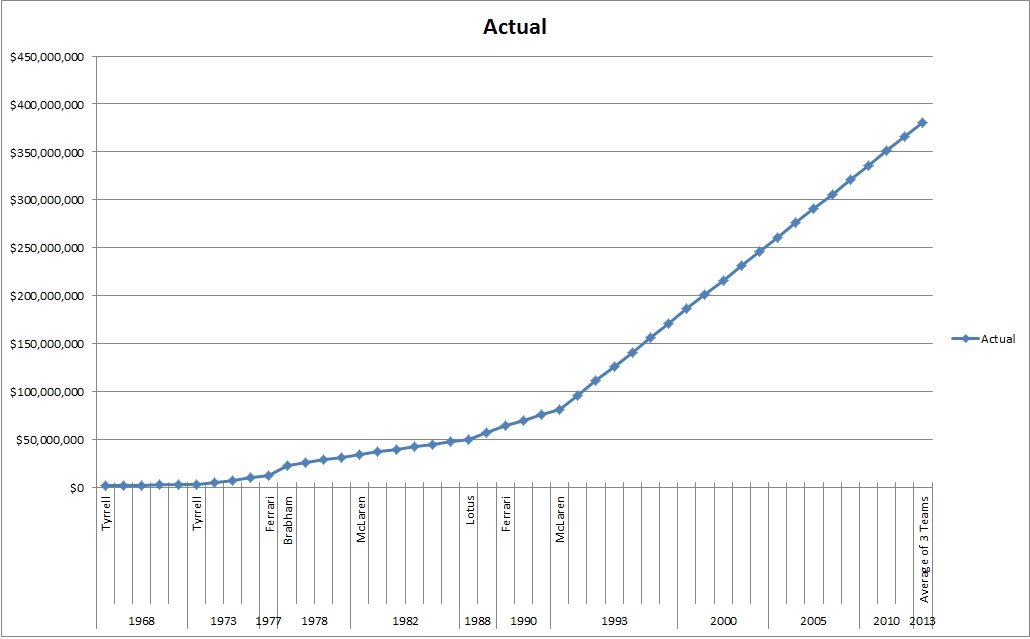 Wow, you might think, look at the rise! (FYI - I have filled in the missing points with a simple progression to complete the line). But then I looked at the cumulative inflation rate. Now, I may be drawing the same conclusion that correlates the sales of margarine in Maine with the divorce rate (Spurious correlations: Margarine linked to divorce? - BBC News) but I can't help think that there is some connection. 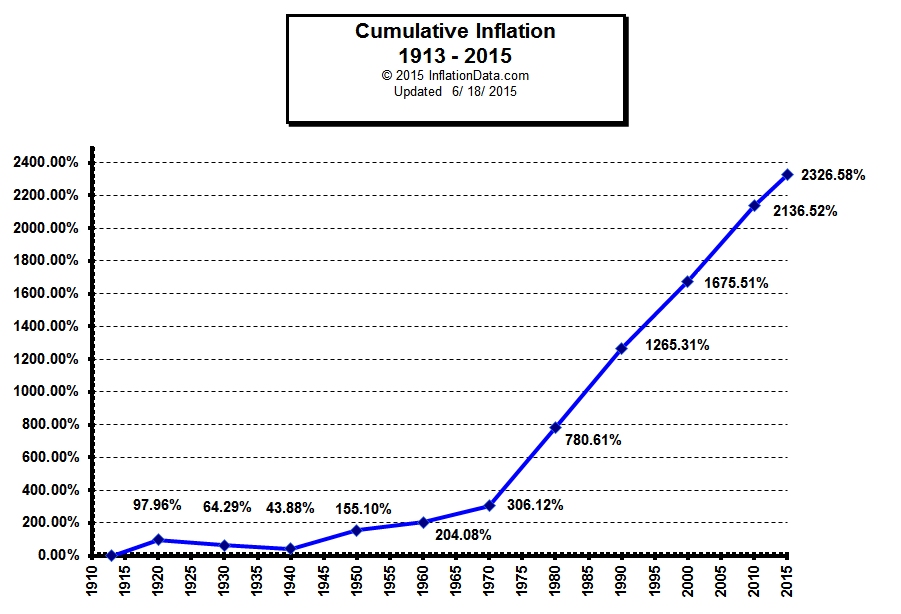 FB Where did you find that data? It seems at odds with the data presented here.

Valued Member
Got it from here - F1: The ever increasing budgets of Formula 1 teams | Auto123.com

Valued Member
Autosport reckon Ferrari spent £330m last season, including engines. Would convert to about $415m, which is on trend with FB's chart, although I believe still there was a peak in 2008 that preceded a short term drop.

Ah, I did not realize that FB's plot did not contain any data points between 1993 and 2013. I think this gives a some what misleading picture. The F1metric's blog collect a more extensive dataset two years ago:

Plotted on a logarithmic scale the constant exponential growth (roughly 20% per year) between approximately 1960 and 2000 stands out.

Since 2000 the maximum budgets have leveled off varying around the 400-500 million dollars.

The "ever increasing" F1 budgets claim often repeated therefore needs to be put in perspective.

1) for most of F1's history annual budget increases of 20% were the norm
2) In recent history budget increases have not been anywhere near that scale. (It seems that F1's efforts to control spending actually did have an effect.)


PS. The above plots concern the maximum team budgets. I think much of the current concern is with the minimum budget needed to keep an F1 team a float. I think that imposing a budget cap would do very little to lower that number. (unless the budget cap would be imposed well below the current spending level of current mid-spending teams like Williams.)