Contributor
I'm starting this thread early as the next couple of days are rather busy, and I may post to it from the mobile as I go, so having it here already might save a couple of thumb-swipes.

This will be the fourth Barca GP in a row - it's a weekend away with the same three mates each time, a break from the family and a chance to let our hair down, hopefully in the sun. Usually a Thursday to Tuesday break, with Saturday and Sunday at the track. I live half an hour from Gatwick so it's an easy trip – four days of mayhem then Monday spent doing absolutely nothing, back on Tuesday fresh as a daisy – well almost. This year however I've had to book another flight from Birmingham at 6.40am on Saturday as I'm attending a funeral there on Friday afternoon. Less said about that the better.

Anyway, that means a cab straight from the airport to the track, and if all goes to plan I'll be there in time for qualifying. Wish me luck.

Quite excited about the seats, first row with decent views of turns 1, 2 and 3. Plus a grassy bank in front of the grandstand to stretch our legs and sprawl out in the sun. 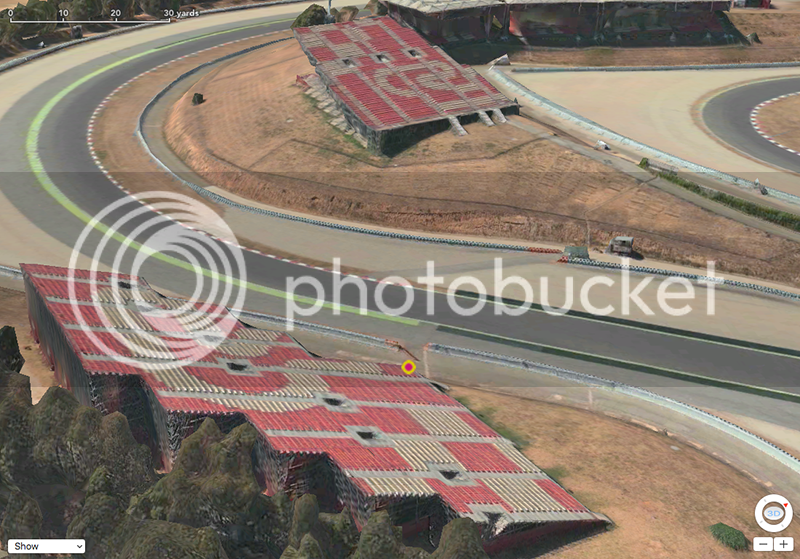 Contributor
Oh yes. Flight ahead of schedule. Smooth as silk. In a cab en route to Montmelo. Ohhhhhh yes.

Arrived! Practice is on.

Contributor
Apologies for the long delay on this thread. Once I met up with my friends the trip took a distinctly hi-octane turn and I've been wheel-spinning and bumping over curbs ever since. So here's a quick rundown of the trip for the record.

Arriving at the track was slightly surreal, with the beginnings of a hangover from the in-flght fizz, and my thoughts with others after a funeral the day before. It was really hot, so I bought a Red Bull cap, blagged some sun cream from the first-aiders and went to the nearest bar. in 2013 you could bring in your own booze which was fab. In 2014 this was banned, and we were caught out, having to ditch our boxes of wine at the gate and buy extortionate, weak beer inside. In 2015 there was a strong suspicion that the beer on sale in the circuit was non-alcoholic, but we'd already bought some hollow binoculars, and some empty sun cream tubes like these, and also washed out three of those rectangular blue freezer pack things. These are great, fit tonnes of liquid. So with these charged with rum and vodka we kept ourselves amused all day. This year I got there before my friends who were bringing the goods so went to the bar to find the nearest thing to booze on offer was non-alcoholic beer. Amazed that they haven't sorted this out - if the circuit only makes money on gate receipts and on-site sales then they're losing a fortune.

Anyway, friends soon arrived, laden with liquid. Quali was great Titch thank you, as far as I can remember. We had a great view of turns 1, 2 and 3 from our seats, and the grass area is huge in front of Stand A, so you can get closer to turn 1 if you wish. We'll be getting the same seats next year, almost certainly. Don't remember any real stand-out moments from the quali sessions. Nice to see Hammy nick pole, and Raikkonen got a cheer as always, and good to see the Alonso and Sainz outperforming their team-mates on home soil. The Honda sounds much, much better than last year, and the matt livery on the Red Bull looks great, although I'd say the difference is more noticeable on TV than in the flesh. They all look great, I even quite like the look of the Renault. We half-watched some of the GP2 support race afterwards (or was it GP3, whatever) but soon moseyed into Montmelo. Barca were playing Granada in the last La Liga football game of the season - a win and they'd be champs - we had half a mind to watch the end. My friend who lives in Barca made it to the local penya (Barca supporters bar) in town and caught the celebrations but myself and Angus preferred the company of F1 nerds in the sun.

It was a late night. On Sunday we were traditionally late, arriving about 1pm, an hour before the start. Taxi straight to the west entrance and it's a 5 minute walk to our seats, so easy. It's amusing getting the cool-bag searched, with a wine-filled set of binoculars round your neck, a pocket-full of fake sun cream tubes and a cool bag containing only warm blue ice-packs full of rum, with no food for them to keep fresh even if they had been cold. Heh-heh works a treat, try it at your next stadium / festival / event.

Start of the race was electric, Rosberg has the lead! Through they charge, no crashes, then there's a roar as they're going out of sight round turn three and we all turn to the big screen. Amazing - both Mercs out. Hah! Game on Ferrari v Red Bull. It was fantastic watching Verstappen hang on to Ricciardo in the first stint. What a boy. A bit hard to work out the pit stop strategy decisions mid-race, but we didn't really care. It's just a joy to be there, soaking it all up. To be honest it's the race I concentrate on least all year - being there is the buzz, not the detail - that's for the TV. Of course you try and make sense of it, which has been hard at this circuit in the past. Hence this report may be a tad low on F1 detail. Tough!

Suddenly it's lap 40 or so, and it seems like Verstappen and Raikkonen are pitted for the win. An incredible half hour watching at it, everyone in awe of Young Max for obvious reasons. I've watched the race since on Sky and it was great to hear how the commentators were so unsure of how it would pan out too. We were sure at one point that Kimi was just biding his time, how wrong we were. An extremely popular winner.

We walked down to Montmelo eventually, with some Dutch Red Bull fans and a few others, most enjoyable. Don't remember much more than that. A perfect day.
Last edited: 20 May 2016

at least Silverstone doesn't do this. You picked a great race to go and see.