Another very late question, but this time with reason. After Monza, Bild.de ran this pic and drew attention to the fact that the exhaust fairings are different shapes. They offered complete details, but only on their "pay" site. Bild is sort of a sports tabloid anyway (witness the fact they reported the hoaxed bill from Ferrari to Mark Webber for "taxi services" at Singapore was legit), so I was interested what they had to say, but was not willing to pay to read it. I hoped at the time the same information would show up elsewhere on the Interwebs, but I have yet to find it, so I'm hoping someone amongst the CTA members might have some insight.

The identical image showed up at Auto Motor und Sport as well (absent the red circles), so I'm fair certain the pic is legit.

No idea what might be going on here but it obviously is something asymmetrical. I showed the image to a gearhead mate of mine in the USA, and he mused whether this might have some IndyCar applications.

Any ideas? Anybody seen/heard anything that might explain it?

Contributor
Presumably each shape is there to optimise airflow of each side on the car, and with Monza having very few left hand turns there might be a benefit to this strategy.

However I also think it is to do with cooling, basically the right side of the car may need more cooling than the left, therefore it has a larger opening to release more heat.

Valued Member
I wonder if it is a special Italian configuration. All the high-speed corners point the same way at Monza so maybe they're going for lower downforce on one side.

Does that make sense?

If this configuration was used anywhere except Monza, I've not seen it reported. I had not considered it might also be a heat exhaust. But it is hard to imagine a heat problem peculiar to Monza and so severe it would merit compromising the Coanda flow on that side.

To an Andrian Newey, it probably is perfectly obvious (my dear Watson), but to the rest of us, it's a mystery.

McLaren ran an asymmetrical exhaust 2 or 3 years ago and I don't think they were the only ones. This RBR one does look quite extreme though.

Those vents aren't the exhaust exits which are much lower on the car. In the "Bild" photo those are obscured from view. 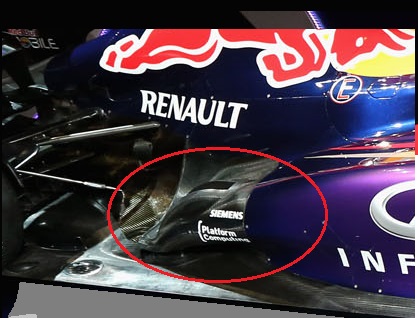 Exhaust exit on the RB9​

Re. "The Bild" image: I don't know what those "vents" actually are but I would think that venting heat is their primary purpose. I would be interested to know if the box-like affair on the right side was there during the race or if it was just on the car for Friday practice. It looks a bit of a "Heath Robinson" bodge but might be a monitoring device of some kind - experimental mount for a thermal imaging camera perhaps?

Whatever it is, it's an engaging mystery ...

Blog Zbod - it's fortunate that you didn't waste your money on a sub'!

Intrigued by this mystery attachment I grabbed some screenshots form Monza footage. No answers, I'm afraid but at least we can see that it has nothing to do with the exhaust ... 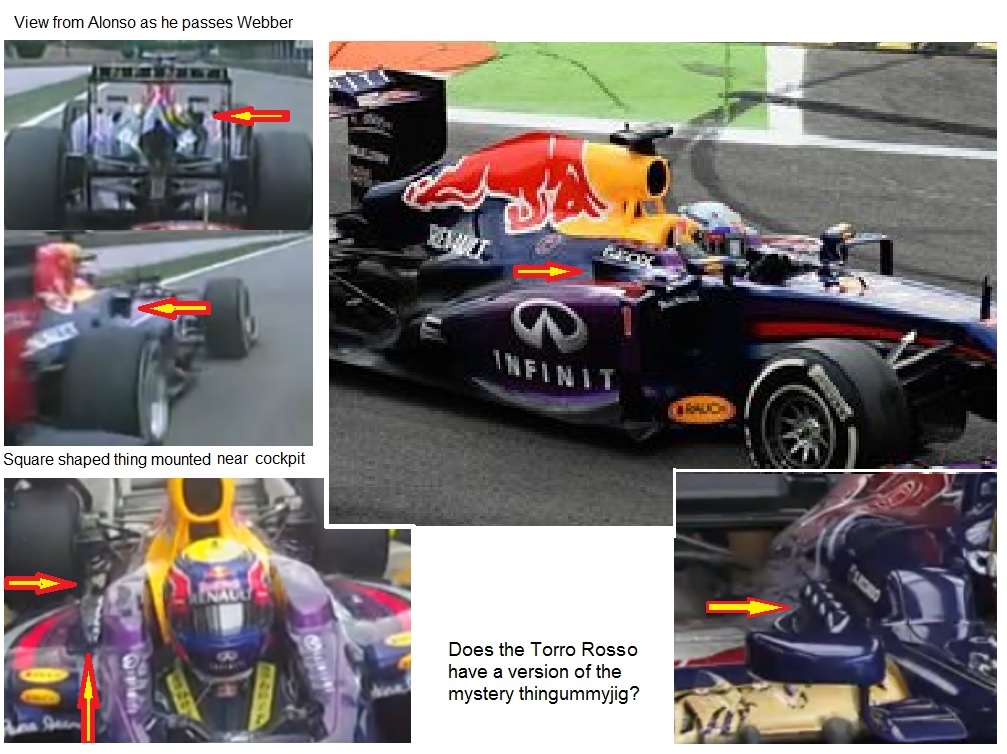 That would explain why no one else were remarking to it. Bild were mistaken (SHOCK!!). Cheers, Fenderman.

My pleasure Blog Zbod . Have you any ideas what the damn thing really is? It's got me stumped.

Contributor
It's for cooling. All the teams have them. Usually they become larger at races where temperatures are higher than usual, normally they are kept as small as possible because the less cooling you require the faster you can go.

That was my suspicion. It does seem rather large and obtrusive in shape though.

Contributor
There have been times over the years where McLaren, and probably others, have run noticeably asymmetric side pods. Here's an example from 2008:

Smaller side pods mean less drag so if the circuit temperature means less cooling is needed (or vice versa) fiddling with things like this must be worthwhile.

Valued Member
I remember Brundle saying once in a feature that the teams have an oil radiator in one sidepod and a water radiator in the other (or some other combination thereof; maybe a mixture of both on one side). That could, potentially, produce a need for an asymmetric cooling solution.

Interesting stuff. That McLaren does look flippin' ugly though!

I'm not at all sure about that photo. It looks to me like one of those photo-shopped jobs that journo's put together to illustrate the differences between pre and post updates. There were times I vaguely recall when Hamilton and Kovaleinen ran the different "L" and box shaped versions on the same day, but that's the first time I've ever seen those two side-pods on the one car.

No offense sushifiesta but methinks I'll believe it when I see it in a video.

Contributor
Fenderman It's from this article, which says the picture is of Kovalainen testing the layout but it wasn't raced (although it was possibly raced later). Note that this is from 2008, which pre-dates the L-shaped side pods (2011). I was in fact originally trying to find an example from 2011 because I seem to remember them running different sized "L"s at some point in that year too.