Toro Rosso took over the Minardi entry in F1 in 2006. Minardi took part in 345 Grands Prix between 1985 and 2005 without a single win, podium, pole or fastest lap but were the starting point for double World Champion Fernando Alonso and race winners Mark Webber and Jarno Trulli.

At the end of 2005 current Minardi team owner Paul Stoddart sold the team to Red Bull to allow them to create a “Junior” team to bring new driver talent into F1. The Red Bull take over resulted in a change of name to Squadra Toro Rosso and then Scuderia Toro Rosso amidst much complaint from Minardi fans. For their first season in 2006 drivers Vitantonio Liuzzi and Scott Speed used the STR1 chassis, which was essentially the Red Bull RB1 car. These were fitted with rev and air flow limited 3.0 litre Ford engines to allow Toro Rosso to compete in the new 2.4 litre formula in place for 2006.

Liuzzi scored a point for the team at the US Grand Prix, a race where only 9 cars finished. The development of the new engines by the other teams put Toro Rosso in a very uncompetitive position and they tended to qualify toward the back of the grid and run in those positions in the race.

With the senior Red Bull team moving to Renault power for 2007 Toro Rosso picked up their Ferrari engine contract. Speed and Liuzzi continued as drivers. The STR2 proved unreliable and both drivers made mistakes during the year leading to speculation that they would be replaced. Speed eventually lost his seat to BMW test driver, and Red Bull junior driver, Sebastien Vettel. In changeable weather at the Chinese Grand Prix Vettel bought his car home 4th with Liuzzi 6th.

For 2008 Vettel was joined by reigning Champ Car Series winner Sebastien Bourdais as Liuzzi moved to Force India. Bourdais finished 7th at the opening race of the season in Australia and Vettel then took 4th in Monaco. As the season progressed Vettel in particular was a regular points scorer and in wet qualifying at the Italian Grand Prix put his car on pole. The rain continued into race day and Vettel went on to win the race becoming the youngest ever Grand Prix victor. More points finishes for Vettel in the final races of the season put Toro Rosso 6th in the Constructors Championship and earned him a place in the Red Bull senior team for 2009.

Sebastien Buemi joined Bourdais for 2009 and after the highs of 2008 the team came back down to earth in ’09. Bourdais was dismissed mid season due to poor race results and Jaime Alguersuari took his seat for the remainder of the season. The drivers managed a few low points finished but the team dropped to 10th in the Constructors Championship.

Buemi and Alguersuari continued for 2010 and again picked up some minor points placing’s, helped by the revised points scoring system for the season. The team finished 9th in the Constructors Championship but were the lowest placed of the established F1 teams.

Toro Rosso continue with the same driver line up in 2011 and, with the STR6 car and Ferrari engines, hope they can move further up the grid.
Click to expand

Contributor
Good performance for Toro Rosso last weekend, a double points finish! And of their cars was 23rd, could have been a 8th and 9th for them in their 200th race, but Alguersuari made a costly mistake.

Their first double points finish in a while, and know safety car was involved, good for them since they are starting to concentrate on next years car and have lost ground to Sauber and Force India

Contributor
I do like Toro Rosso but I wish they'd take the Minardi name back.

Contributor
Minardi Toro Rosso has a better ring to it

Contributor
Toro Rosso have been slipping further back in grand prix's most notably in qualifying, Buemi (moose) seems confident they can challenge for 6th place in the constructors this year since they have a few upgrades coming for Spa. And let's hope so, always good to see Moosey in the points!!!

One thing I found interesting in this article is, this

Although Toro Rosso was created when Red Bull took over the Faenza-based Minardi team, which first came into F1 in 1985, it effectively had to build up its facilities to be a full constructor from close to scratch.
Buemi believes that the team is still developing and that it has the potential to continue to climb the grid in the long term.
Click to expand

So in a way they are like Lotus, Virgin and HRT with just a bit more experience?

Slyboogy said:
So in a way they are like Lotus, Virgin and HRT with just a bit more experience?
Click to expand

Hmm, not really, the Minardi team always designed and built their own cars at Faenza since 1985, there was just an interlude there of a couple of years where the blueprints were being faxed through from Milton Keynes...they're certainly smaller than Sauber or Williams though.

Valued Member
Here's a virtual tour of the Toro Rosso factory for your enjoyment. Can't embed the video I'm afraid.

RasputinLives said:
I do like Toro Rosso but I wish they'd take the Minardi name back.

FB said:
Here's a virtual tour of the Toro Rosso factory for your enjoyment. Can't embed the video I'm afraid.

Lovely FB. Faenza is a nice town. How bizarre and disappointing that they have a sign saying 'Machine Shop'!

Supporter
...and now sold to the sheikhs of the UAE?

If Joe is right about the factory moving to the Arabian Peninsular then this would break the last links with the old Minardi crowd. A shame, but I guess minnows will always be swallowed by whales.

Smells like one of those stories where one strong rumour has been stewed up into a whole meal of lesser rumours. We'll have to see how much of it turns out to be true...

Contributor
Would this mean they would not be Red Bull's little sister team anymore? In which case the likes of Buemi, Ricciardo and Alguesauri may have to come out from under the Red Bull banner. Could open up some seats for some.

I have to say I'm a little concerned about the moose keeping his F1 seat!

RasputinLives said:
Would this mean they would not be Red Bull's little sister team anymore? In which case the likes of Buemi, Ricciardo and Alguesauri may have to come out from under the Red Bull banner. Could open up some seats for some.

I have to say I'm a little concerned about the mouse keeping his F1 seat!
Click to expand

We have a mouse too now!? I was just getting used to the moose.

The guy has been very unlucky this year.
He would have scored the double amount of points of what Alguersuari already has if he didn't get taken out by Perez.

Future doesn't look good for any of the Toro Rosso drivers, I read somewhere that they will get another young Red Bull driver for practice sessions this year.

New line up for Toro Rosso next year?

I hope the Moose goes to a better team, been the better driver out of him and Alguersuari in all the seasons they have been paired together.

I will be very disappointed if he gets dropped next season, my whole world may come crashing down.

Contributor
Big well done to Torro Rosso - they may become Team UAE next year but right now they are Italy's second team and getting both cars in the points at there home race is a great result for them.

They already have more points than the last 2 seasons put together and are right in there with the Saubers and Force India's in the battle for 6th - being only 7 points behind. That would equal the teams highest constructors finish. Would be nice for them before the team left Italy.

Contributor
Would be right up there if both drivers didn't get taken out of the Belgium Grand Prix!

Contributor
Could Toro Rosso about to kick both their drivers out the team at the end of the year. Ricciardio is in the wings already but now lets say hello to this fella. 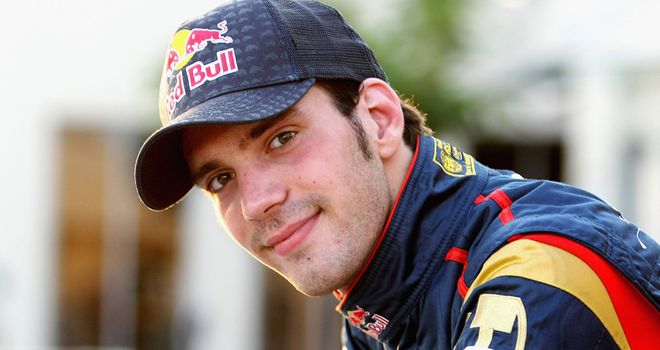 He'll ne taking Alguersauri's car for 1st practice in Korea and Buemi's for Abu Dhabi. The Frenchman is 21 years of age - came second in the Renault 3.5 series this season finishing just 2 points behind his team-mate Robert Wickens who won the championship. Very Senna and Prost like the 2 of them collided in the last race with Wickens retiring. Vergne carried on and looked like he'd take the title only to be taken out by Fairuz Fauzy of all people later in the race meaning neither finished and Wickens was champion - both blame each other for the crash! He also won the British Formula 3 series the year before following on from Ricciardo and Alguersauri. Think he's in for Brazil too. They're giving him a lot of running time if they weren't considering him for the drive and I bet he brings some tasty French sponsors with him.