Following success in sports car racing Peter Sauber, in collaboration with Mercedes Benz, moved into Formula 1 in 1993. With Ilmor engines Sauber entered the C12 car (the C prefix for Sauber cars coming from Peter Sauber’s wife Christine) driven by Mercedes sports car drivers JJ Lehto and Karl Wendlinger. Lehto finished a creditable 5th in their first race and the cars proved fast but unreliable. When the cars finished they often picked up points with Lehto managing 4th in San Marino and Wendlinger the same placing in Italy.

In 1994 the team became officially Sauber Mercedes as the Ilmor engines were rebadged as Mercedes units. Heinz Harald Frentzen replaced Lehto and the team showed similar pace to the previous season with a number of minor points placings. Wendlinger was replaced, following an accident at Monaco, firstly by Andrea de Cesaris and later in the season by Lehto. Wendlinger’s accident, following closely after the deaths of Senna and Ratzenberger at San Marino, resulted in changes to the design of the cockpit on F1 cars to provide greater head protection in the event of an accident.

Jonny Herbert partnered Frentzen for 1996 and managed a highest of 3rd at Monaco, with Frentzen 4th, but the team ended the season on their lowest points tally since entering Formula 1 with 11 points

From 1997 to 2005 Sauber used customer Ferrari engines and run under the name of title sponsor Petronas. The tie in with Ferrari extended beyond the supply of engines as Ferrari also provided the Swiss team with technical support.

Jonny Herbert continued with Sauber for 1997 and ’98 and was partnered in ’98 by veteran Jean Alesi. Herbert managed a podiums at Hungary in ’97 and Alesi in Belgium in ’98 but generally Sauber’s performance was fairly ordinary. In 2001 Sauber hired young Finnish driver Kimi Raikkonen amidst protest form other teams due to his lack of experience. Raikkonen scored a point on his debut with teammate Nick Heidfeld 4th in the same race. Raikkonen’s appointment also triggered the sale of Red Bull’s stake in Sauber to Credit Suisse as the Austrian drinks company wanted the seat given to Enrique Bernoldi.

Peter Sauber continued to give drives to promising youngsters with Felipe Massa racing for him in 2004 & 2005 and Robert Kubica replacing Jacques Villeneuve in 2006.

For 2006 BMW took a controlling interest in the Sauber team and BMW units replaced Ferrari engines. BMW “works” driver Nick Heidfeld returned to Sauber from Williams and the team finished 2nd in the Constructors Championship behind Ferrari (following the exclusion of the McLaren team). Heidfeld scored points in 14 of the 17 races that season. 2007 also saw the first F1 drive for Sebastien Vettel who substituted for Robert Kubica at the race in Indianapolis following the Pole’s crash in Canada.

2009 was a disappointing season following the highs of 2008 as Sauber struggled with changes to design regulations. Heidfeld and Kubica both managed a 2nd place each but the team dropped to 6th in the Constructors Championship. By the end of the season BMW decided to pull out of the sport.

Following BMW’s withdrawal Peter Sauber took back control of his team. Re-equipped with Ferrari engines Sauber signed promising young Japanese driver Kamui Kobayshi alongside returning veteran Pedro de la Rosa. Early season reliability problems blighted the team but by the end of the season, and the replacement of de la Rosa with Nick Heidfeld, Sauber began to score points on a regular basis. Kobayshi managed a highest finish of 6th in Britain and the team ended 8th in the Constructors Championship.

Kobayashi stays with Sauber for 2011 alongside Sergio Perez who brings with him some much-needed sponsorship from Mexican Telecoms company Telmex. The C30 chassis continues with a Ferrari engine.
Click to expand

I was delighted when Peter Sauber rebought the team. I was afraid the team had to quit the sport, and I've been a fan of them ever since I first started watching Formula 1 (I can't really remember why... I think it was because I liked how their cars looked haha). I've stuck with them through the years and it's nice to see them moving up the grid. There have been a few setbacks but they usually finish in the points.

I also think it's admirable how Sauber isn't afraid to sign young guys. I don't think many teams would have signed a relative rookie (Kobayashi) and a complete rookie (Perez), but it seems to have worked out pretty well.

I hope they can get back their 2008 form, and start winning championships in the future. It's quite a way to go but they'll get there... 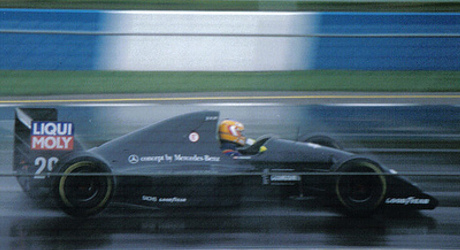 Loved the plain sleek black - pure and simple and to the point. loved it.

I remember them scoring points in their first race and I remember thinking both JJ Lehto and Karl Wendlinger were both future world champions...........yeah ok I got that bit wrong.

Never had a season without scoring a point and even nicked 4th in the constructors championship in 2001 (I don't like to count the BMW years).

Whats more Peter Sauber always likes to give up and coming drivers a chance. All power to him for that.

Contributor
It's good to hear that Kobayashi and Perez are staying with the team for 2012 - http://news.bbc.co.uk/sport1/hi/formula_one/14325183.stm
I rate both drivers highly, and I think Sauber can compete for podiums in the near future.

RasputinLives said:
I took a liking to Sauber because of their original colour scheme

Similar for me, although it was in 95: 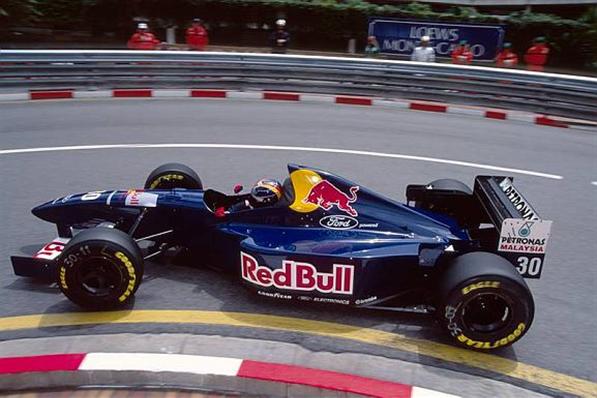 look familiar?
Incidentally, Wendlinger was in the same Mercedes stable as Michael Schumacher and I believe had fared better at lower levels so your admiration of him wasn't that far misplaced. It's a shame (for Sauber, not really for me as a McLaren fan!) that Mercedes went with McLaren in '95. Who knows where Sauber would have ended up had they paired up with Mercedes in the same way as McLaren.

On today's news, good to see both drivers kept on for next year. Kobayashi is a huge talent as is Perez. Hopefully they can achieve some decent results beteewn now and the end of the season and get in some bigger sponsors for next year.

Contributor
Both Sauber drivers thinking this race was a demolition derby.

Both of them caught up in two incidents each, one at the start for Perez then he took out Buemi and I am confused on how. Kobayashi before the incident with Hamilton had a damaged front wing, then the collision with Hamilton.

You can't really blame Kobayashi for that second incident though...

RasputinLives said:
Didn't someone go into the back of Perez at Spa and say the same thing too?
Click to expand

Eh? Perez ran int othe back of Moose in Spa!

I quite get what you are saying here, they always leave their drivers out on worn tyres, Hungary best example with Kobayashi, they always seem to struggle a lot, but then you can't blame them, you can blame the tyres for being so shitty.

Valued Member
Question - do Sauber still compete in any other races series other than F1?

Is it just me getting a feeling about Sauber next year? I know the whole Di Resta/Hulkenberg line up has grabbed the headlines but you have to say Kobayashi/Perez is just as good. The Drivers have been confirmed for a while so are obviously commited to the team, they seem to work well together, Sauber seems to have secured its funding now and they seem well in front on the design for next years car with plenty of time for testing.

Lets not forget that before BMW came along Sauber were reg the 5th best team and even got 4th in the constructors back in 2001. I think they're more than capable for building a good car. Maybe not a race winner but certainly one that can compete with those Mercs and the Lotui!

Bit of a blow for them there as I think he's done a good job of helping build them back up again after BMW left them in a mess. Hope they have someone else lined up. 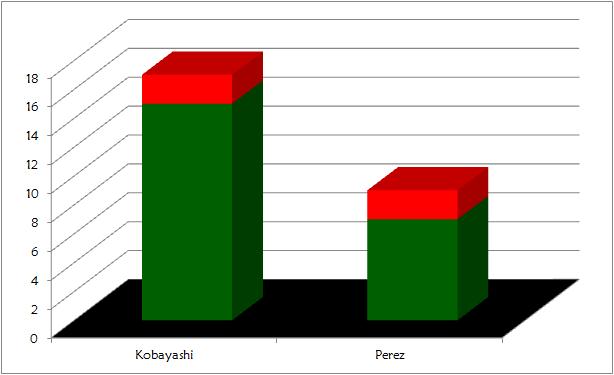 
With Mercedes, Lotus and Ferrari floundering compared to last season it's not surprising, but it's still a great effort, plus the fields more tight making it interesting

RasputinLives said:
Is it just me getting a feeling about Sauber next year?
Click to expand


I'd forgotten I wrote that! If I could only be so good in teammate prediciton and fantasy F1!

Contributor
Ya know I think Perez had a great drive and I think he's a great driver but I still think Kobi is capable of beating him come the end of the season. I hope Perez doesn't relax a bit too much after a result like that because Kobi showed last year he scores points consistantly and will soon cut the gap if Perez doesn't keep scoring.

Cracking driver line up as I said. I think they'll be pushing it to keep their 4th spot but if Merc's keep eating tyres and Lotus keep only getting one car to the finish you never know!

That very effective wind tunnel they have at Hinwill came courtesy of bags of West McLaren Mercedes money thanks to Raikkonen's buy-out way back in 2001.

What chances Sauber gets a double helping courtesy of Scuderia Ferrari Marlboro money for young Checo?

The amount of money potentially changing (Swiss bank) accounts could be eye-watering.