A question or two and some notes on the 2008 British GP.

I had a fantastic weekend at the British Grand Prix and noted on several occasions how very differently drivers exit and approach some of the corners - you just don’t see it on television so clearly.

Most notably it struck me as uncanny how Kubica and Hamilton exited Luffield almost identically every single time, taking it out to the absolute very edge of the kerbing heading onto the pit straight. In fact there were distinct similarities in their style all weekend - both very aggressive indeed.

I paid attention to how much more stable the Ferrari's seemed compared to almost every single car in the final few corners, except on the couple of occasions I spotted Kimi and a few others sawing away at the steering wheel, exciting stuff! I’ve also got to comment on how ‘exciting’ Alonso is to watch driving. It’s hard to explain but if anyone’s seen him recently let me know if you agree.

Interestingly, if any of you were there, did you notice how much louder the Honda engine was compared to the others? Ouchies on the ears!

This brings me to me to my question...

I was very aware of the amount of backfiring/pops/bangs coming from the Honda's all weekend, particularly on downshifts and deceleration, but sometimes on upshifts too. This happened very much more noticeably on the Hondas than any other car and I wondered if this is a sign of a 'not so well tuned' engine as it were? Is there a detrimental performance effect on (what I assume is) an over fuelled engine in this case? I'd appreciate your viewpoints to sate my curiosity on the matter!

Finally, here's one of my favourite shots taken this weekend. A nice impression of speed even though the shot was taken at a time where I had my smaller lens installed. 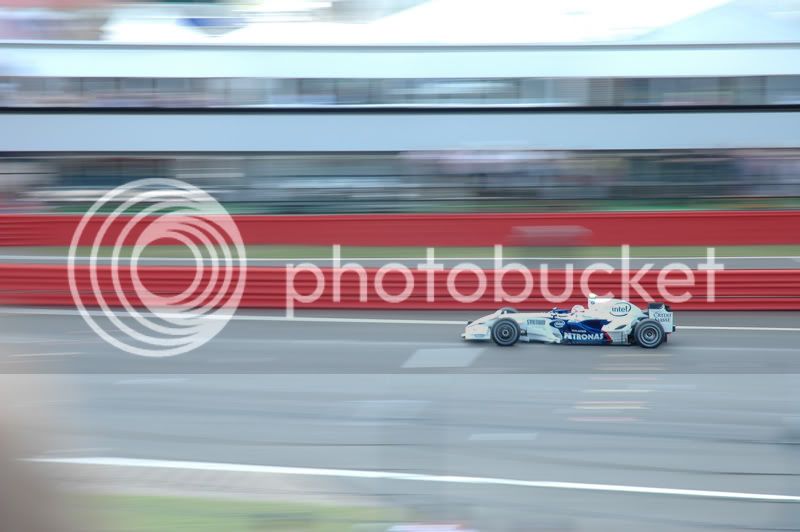 Lucky you being there live.

Unfortunately I wasn't at the race this year but I was at testing the week before.. did put some comments about testing on here. Like you I noticed that the Honda's and Beemers were a good few decibels louder than the others and the Honda was definitely backfiring like a good un .. in fact, at first I thought the car was going to break down.

It is obvious that the drivers who are pushing the hardest seem to take up more of the track on the exit of the corners, brushing right up against the outer edge of the rumble strip. Kubica was certainly doing that during the test but the day, I went it was Kovi on duty for the McLarens ... he also impressed me though.

the action photo .. maybe you could put some on gallery for us to ogle at. When I tried last year I got lots of shots with empty track lol the cars are so fast.

Welcome to the board lol

I was there on Friday, the only sound difference was with the Ferraris - to my ear they sounded a lot smoother (less scream, if you like!).

Spotted the "traction-like" noises on some cars and questioned it - but got a very ambiguous reply!

But you could definitely hear those who went over the kerbs and those who didn't - very like hitting the rumble strip on a motorway.

Great Alonso fan and agree that he is both exciting and masterful to watch - can always wring more from a car than should be possible - having said that, his car died on Friday and parked up gracefully before our very eyes! But he did wave?

Great picture - as Salti said, please offer it up for the Gallery.

Hope you enjoy it here! It's brilliant and getting better every day.