Contributor
So as we go into the final race on Sunday I'm sure most people think the season is all wrapped up and winding down right? Wrong. For some in the paddock there is a nail biting finish coming up which could shape the whole of next season.

Sauber currently sit 7th in the Constructors table on 42 points whilst Toro Rosso sit in 8th with 41 points. Whilst both could mathamatically overhaul Force India with 57 points it seems unlikely as do other changes in the Constructors table. Does it really matter who comes 7th and 8th I hear you ask? It does to the teams and everyone who works for them. The difference when it comes to prize money is $3 millions dollers. A massive amount that could not only shape the teams development for next year but also directly effect mechanics and team members bonuses and wages. For them this is nail biting and you can bet they're working their butts off to make sure its their team in that 7th place.

Peter Sauber has already told the media that he is confident that he can secure the place after their Abu Dhabi pace but there is no hiding that its Toro Rosso that are the team on the move. Sauber have picked up only 15 points in the last 10 races compared to Toro Rosso's 25. In fact Sauber team leader Kamui Kobayashi broke his 8 race point scoring duck in Abu Dhabi and has been very much playing second fiddle to Sergio Perez for the second half of the season. Having said that if it wasn't for Kobi's run of six consecutive points scoring finishes at the begining of the season Toro Rosso would be well clear.

Toro Rosso's main points scorer has been Jamie Alguersauri on 26 points who has been a revelation for the second half the season scoring a top ten finish in all but 4 of the last 10 races. Good work for someone who was on the verge of losing his drive early in the season. Team-mate Sebastian Buemi has never been too far behind him and it could be said but for a few unlucky mechanical failures in the last few races that Toro Rosso would already have that 7th place secure.

The 2 teams have had polor season it could be said. Sauber started strongly and have faded as the season went on and have 2 drivers who signed contracts for next year nice and early and who are nice and secure in their seats. Toro Rosso have got stronger and stronger as the season has gone on and have 2 drivers who have no idea if they'll be in F1 next year and are fighting tooth and nail.

Most people are putting their money on Toro Rosso it has to be said - their car has looked better and better in the last few races and they have pace to be running in the top ten without having to resort to any clever tactical moves. Sauber have looked slow recently they will admit themselves and its only been some brilliant tactical races by Sergio Perez that have been landing them any points at all. However lets remember this is the nearest to a home race Perez has and this was also the first time we ever saw the fighting spirt of Kobayashi. Both Toro Rosso's drivers have cracked under pressure before and could it be that the pressure of having to get the team up to this 7th spot in order to save their entire careers is way too much. Alguersauri certainly vanished off the map last Grand Prix. Peter Sauber is a wyley old fox so expect some clever move from Sauber this weekend in order to bank a points finish.

Whichever way the result is going whilst your sitting there supping a beer or eating a sandwich or whatever it is you do whilst watching a Grand Prix probabaly having a little moan to yourself that with no championship to decide its all a bit pointless and a little dull just remember there are some mechanics, team members and drivers who are biting their nails down to the nibs at the huge amount this race means.

Still think Sauber will keep 7th place, primarily because if they end up on equal points, Sauber will finish ahead.

Contributor
I like both teams, but a little more of a Toro Rosso fan, both would deserve it. But I feel Toro Rosso really should be ahead as Buemi has had to retire 3 times while in the points in the second half of the season, plus both Toro Rosso drivers at Spa where on for a good result and got taken out through no fault of their own. Meanwhile, the two Sauber drivers seem to have let themselves down, at least one of them in the past few races has had damage to their front wing, also dropping the EBD didn't help them either. You could also argue that Sauber should have more points as Perez missed 2 races where Sauber scored their highest finish of the season with Kobayashi. Plus Sauber the team have had some strange strategies, sometimes they work, sometimes they don't.

Kamui vs Jaime
Sergio vs Sebastien

Tough, but I think Sauber might pip it because Kamui will have some inspired overtakes attacking like a kamakazi pilot in the middle of the race and then defend like his life depends on it!

jenov2003 said:
Would have been a whole different ball game if Sauber hadn't been dsq'd in Australia though


I think Sauber would have been 14 points ahead, and only 2 points behind Force India.

Contributor
Think Toro Rosso will get 7th in the championship.
They've got the pace and with Buemi and Alguersauri they've got two drivers that are much more likely to score points as the cars faster than the Sauber. Plus would actually like Toro Rosso to finishes 7th they've had a couple of seasons where they've been unlucky.

I've got high hopes that Sauber will keep their seventh position! This has been the most exciting battle for the past few races for me tbh

Contributor
Another great thread, Rasp.It has been fascinating to see the ebb and flow of the midfield battle this year. First it was Renault well in front, even taking points off the big four - Alonso, Webber, Massa finished behind a Renault in each of the first two races as did one McLaren. But, oh how the mighty have fallen.

Those points locked Renault into 5th place in the Constructors', but if you take the big four teams out over the whole season, how did the midfield battle really shape up?

Let's imagine that the big four were thrown out of the driver's and constructor's championships, how would the season have panned out? Remember, Petrov's 3rd in Melbourne and his 9th in China would both be considered wins (25 points), as in each case he was the best of the midfielders.

Would you have said that Force India had won the midfield battle? Certainly, their reliability and consistency has been far ahead of their rivals. Di Resta did go off the boil a bit in Valencia, Silverstone and Nurburgring but by this measure, both drivers have beaten the Renaults.

It seems that everyone has had a little spurt, Kobayashi certainly had a good start too and by Canada he was keeping pace with Heidfeld and Petrov but he has tailed off, much as has Buemi, although in his case particularly, mechanical issues have hurt.

A special word for the gold medal leader in this category, Jaime Alguersuari - with the most wins, he is poised to collect the gong, but must be worried about Sutil and Petrov equalling his total and winning on countback. Jaime, has no second places to his name 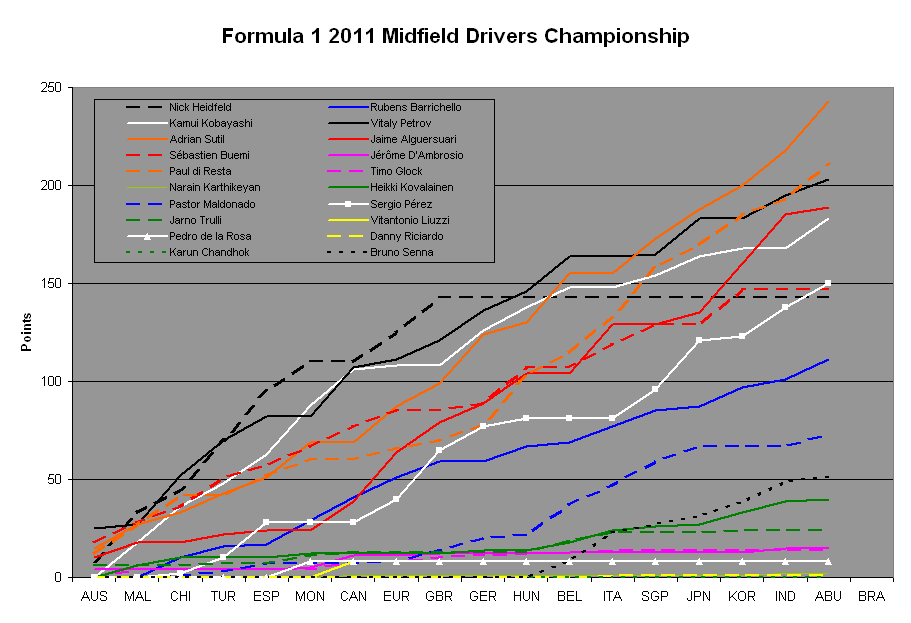 Algersuari and Perez have come through strongly to replace the early leaders, and even looking at things this way, there is everything to play for between Sauber and Toro Rosso. Both teams could have been much nearer Force India had their drivers not seemed to take it in turns to score points. Buemi's early season results put Jaime to shame a bit, but now the luck has gone the other way. The same at Sauber where Perez and Kobayashi have alternated a bit - again luck and accidents have played a part causing this.

All this while, the midfield world driver's champion of 2011, Adrian Sutil has steadily banged in podium after podium (9 in total with all his nearest challengers having seven). He clinched this championship in Abu Dhabi, where Force India also locked up the Division 2 Constructor's imaginary crown. 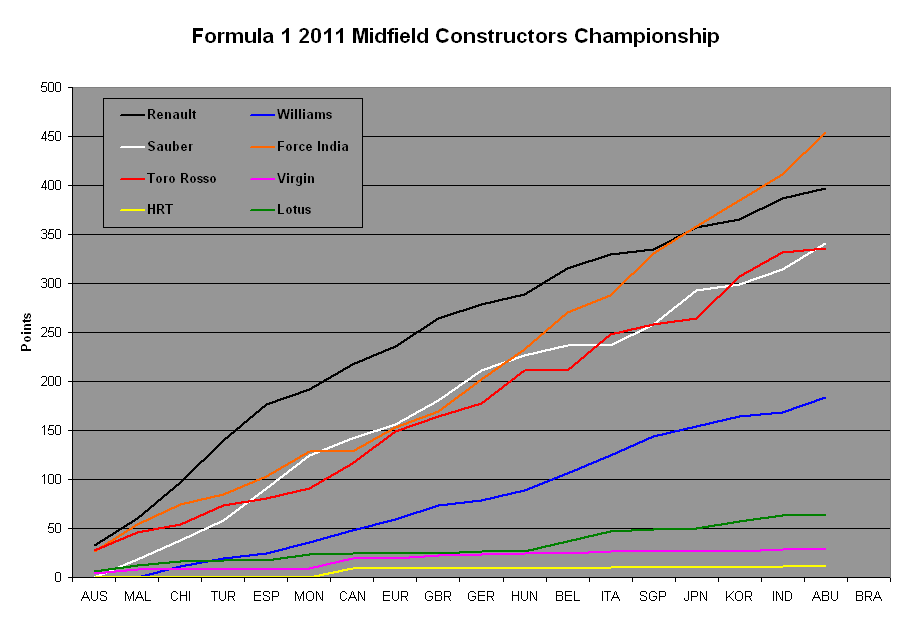 I think an imaginary crown would suit Vijay

Have to say the season looks far more exciting without the big 4 teams in it doesn't it? 7 different GP winners with 4 different winning teams. Having said that I doubt Renault would have dropped Heidfeld for under performing if he'd been leading the title race!

Interesting Adrian Sutil comes out on top and is so consistant when he's recieved very little praise this year and is not even sure of his drive for next season!

RasputinLives said:
Have to say the season looks far more exciting without the big 4 teams in it doesn't it?
Click to expand


Depends on how you spin it 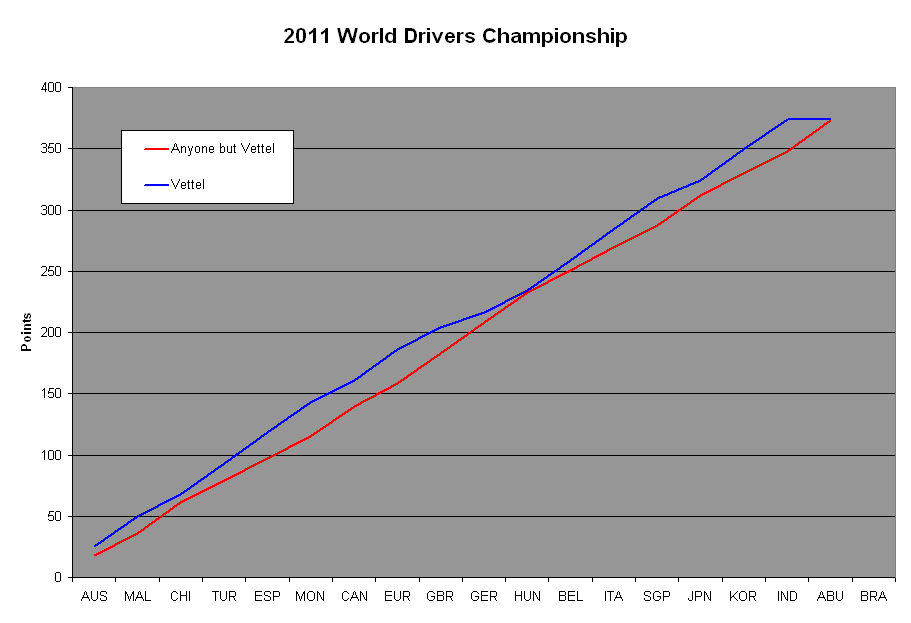