The long 4 month 7 month drought of F1 is soon to be over. as on 15th March 5th July we will finally be getting 2020 season underway (Virus permitting

) .I can guarantee 1 thing that the 1st race of this decade cant be any worse than the 1st race of the previous decade which seemed to set the tone for the poor decade that would follow. as 2010 Bahrain GP is ranked up there with the 2019 French GP & others as some of worst F1 races in history. so bad that they were started a discussion to have mandatory 2 stop races. but we will see who will follow in steps of Giuseppe Farina, Bruce McLaren, Jack Brabham, Alan Jones, Ayrton Senna, Michael Schumacher & Fernando Alonso as the 1st Grand prix winner of the new decade, which is starting in the most peculiar & odd way of its whole 70yrs. so no pressure on Sundays winner as will have to keep up the world champion streak & even the 1 that didn't founded 1 of F1 most successful teams

but on Australia, there history of motor....., wait Austria you say. sorry about that guys, Austraila & Austria very easy to mix up

Luckily Austria also has had a long history with F1 stretching back 55 years, even if it doesnt feel that long if grand prixs have been in short bursts. but so many drivers & other major people in F1 history have come from this small country. Lauda, Berger, Rindt, Wurz, Wolff, Marko & the mighty Patrick Friesacher. the history starting at the zeltweg airfield very close to red bull ring. where the top 3 on the grid after qualifying in 1964, was the British trio of Graham Hill, John Surtees & Jim Clark. but all 3 retired before half distance & actually a weird race when you look at it because bandini won his only GP of his 42 race career from 7th on the grid only 9 finished 2 on the lead lap. a brit finished on the podium but 3 laps down & Jack Brabham finished last 29 laps down (whats the point

) Then austria had to wait 6 years when they would race at fearsome Österreichring between 1970 & 1987 when it was stopped on safety grounds for many reasons as the final pole lap averaged 159mph despite narrow track little run off & the 2 big accident at the start, was the final nail in the coffin. Then Austria would have to wait 10 yrs til the Next GP after It huge overhaul by herman tilke funded by Phone Operator A1 we would return from 1997 to 2003 bringing some notable moments 1998 where we unusual front row of Fisichella & Alesi, also 1st rumoured use of ferrari team orders. which would rear its ugly head in 2002 that is 1 of F1 infamous moments & also known for horrible crash between sato & Heidfield at turn 3. Then in modern times it takes a distinct turn because in a way we are lucky to be racing at the red bull ring at all. because less than a year after the final GP at A1 ring in 2003. The grandstands & pits were demolished. but construction was halted making it completely unusable. & so many people tried but fail to resurrect it, it looked bleak for the great circuit but 5 years later in 2009 Red Bull decide they were going bringing it back to life (2nd time lucky after 2005 when he refused to spend money on it) in time for the 2011 DTM series. then after Doomed from the start New York race. Bernie said a spot became available on F1 Calendar which Red bull Enquired & the rest since 2014 is history

but now in modern times it is quite strange to be starting it in Austria because this will be the 1st time the season has started in Europe since 1966 when Monaco GP was season opener, also when you think of 12 months ago coming into Austria 2019. the title was dead Hamilton was 76 pts clear of the next non Mercedes driver & we were just waiting for when we crowned Lewis as the 6x world champion not if, but this whole season is going to be extremely odd as it will be the 1st ever double headers in F1 history even if its Austrian & Styrian GP. also British/70th anniversary. maybe some circuits that will host as a 1 off with portugal. Mugello (for Ferrari's 1000th) Hockenheim, Imola, Bahrain "Oval" & a season that might stretch into january as the sport tries to get 8 to make a World Championship & 16 races to fulfill the F1 TV contracts. no podiums the trophy will be collected by the drivers on the grid & both top 3 interview will take place like they do post qualifying last season on the grid as well. no pen interviews for obvious reasons instead they will be in front of the team garages. & F1 cars that will last more than a season for 1st time since the 70's. which will be a strange end to this era before maybe the biggest rule change for F1 in many decades. is looking like an intriguing season which hopefully Australia Austria will give us some answers.

The 5 sec penalty was not fair. That was a classic racing incident.

Valued Member
That was much better than I expected, very entertaining.

P1 said:
The 5 sec penalty was not fair. That was a classic racing incident.
Click to expand

I'd disagree... Albon was well ahead, and Hamilton's actions effectively ended Albon's race. Yes, you could argue that there wasn't much else he could have done, but his actions directly led to another driver losing out, whilst Hamilton didn't suffer. I can't see any other action, but to give some form of penalty. (I think that, given that this is the second time in 3 races that Hamilton has been involved in very similar clumsy collisions with the same driver, he was lucky to end up with just a 5 second penalty).

The Artist..... said:
I'd disagree... Albon was well ahead, and Hamilton's actions effectively ended Albon's race. Yes, you could argue that there wasn't much else he could have done, but his actions directly led to another driver losing out, whilst Hamilton didn't suffer. I can't see any other action, but to give some form of penalty. (I think that, given that this is the second time in 3 races that Hamilton has been involved in very similar clumsy collisions with the same driver, he was lucky to end up with just a 5 second penalty).
Click to expand

You are entitled to an opinion. But yours is wrong.

Contributor
Even though it took until the 1st week of July, that race was worth the wait.

Bottas is under contract to not beat Hamilton and Hamilton and Mercedes have an agreement with F1 to win everything.

Race was very strange but very interesting.
Penalty for Hamilton is not correct:
- wasn't move by stearing wheel to Albon direction
- Albon striked rear wheel to back side front wheel of Hamilton

Best driver of the race is Lando Norris

Staff Member
Premium Contributor
The number of posts I've seen on the Beeb website and twitter talking about the high number of retirements is amusing.

Clearly they've been made from people born in the 90s as they don't remember a time when an F1 race was lucky to have 6 cars finish. 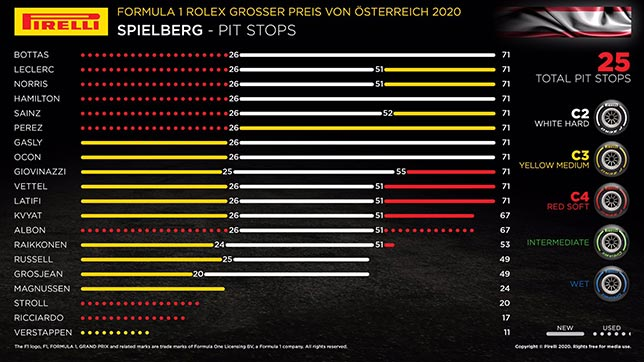 Valued Member
Hamilton has never been good in Austria*, so for him to be quicker than Bottas in the race he ought to feel pretty confident for that seventh title.

If he wasn't already.

Staff Member
Premium Contributor
Watched the F1 highlights on C4 to see what they thought of the Hamilton and Albon incident.

I am still 100 percent baffled as to why Hamilton got a penalty. Really don't get that at all.

On the other hand, Lando was brilliant so I'm chuffed about that.

Swings and roundabouts I guess.

Yeah, another one of those penalties Hamilton seems to get from time to time for, I'm not sure there was anything he could have done to avoid that contact, and I suspect any action he took would have made him "do a Vettel" that is still hit Albon, but in a far more detrimental way.

What is was baffled about was:

cider_and_toast said:
The number of posts I've seen on the Beeb website and twitter talking about the high number of retirements is amusing.

Clearly they've been made from people born in the 90s as they don't remember a time when an F1 race was lucky to have 6 cars finish.
Click to expand

i know back to the good old days. its efficiency is boring. nobody wants to see all 20 cars finish. some of the worst GP ive watched had no retirements