The Russian team marches into the Fisht Olympic Stadium in Sochi, having equalled the Soviet Union's record of 13 gold medals at a single Winter Olympic Games, top of the medal table. The organisers even found the time to self-deprecate the technical failure at the Opening Ceremony when one of the Olympic rings did not open.

Four years later, Russia would officially be banned from the Winter Olympics. Its tally of golds is down to eleven.

Igor Akinfeev is captain of Russia's national football team, who have got much further than anyone expected in the World Cup. He is facing up to a penalty from Ivan Rakitic of Croatia and Barcelona at the Fisht Olympic Stadium in Sochi. If Rakitic scores, Croatia will face England in a semi-final in Moscow. Otherwise, Russia still have a chance.

This time, even as Akinfeev dives the wrong way, Russia have made friends in defeat.

So Sochi has hosted two events guaranteed to make your city (and surely thus your country) a sporting centre of the world - the Olympics and the World Cup. And the third item on that list...

Vladimir Putin is, in many ways, a show-off. It is important to him to show that he is a strong man, and by extension that the nation that he most certainly rules is a strong nation. And what do those internationally recognised strong nations do? They host events. Which are the most visible events? Sporting ones.

The Soviet Union hosted the Olympics, of course, in 1980. The Olympics were, until the fall of Eastern Communism, amateur. However, the World Cup was just too professional for the USSR to host, and Formula One was thus right out. A sport for the wealthy, requiring sponsors and capital? Where one of the drivers would eventually become the 7th Earl of Bute?

It does seem that he doesn't actually want to watch any sport he's holding. Is this why he tends to turn up with 20 laps remaining, or is that so the cameras get a chance to linger as he presses the flesh and enters the main stand? He was there for the opener and the final of the World Cup only, and one would have thought he'd have brought an umbrella for the presidents of France and Croatia during the trophy presentation. He probably thought the fact that only was dry made him seem the most important. In fact, it simply looked like Macron and Grabar-Kitarovic actually wanted to be there.

So, Sochi. Is it worth visiting? Well, the Wikipedia page does not state the height of the spire of St. Michael's Cathedral but it has certainly been worth a visit for the Mercedes drivers over the four years it has held a Grand Prix. They are yet to lose, although Sebastian Vettel was on pole position last year. It would be ironic if this was the race at which Ferrari regained composure.

Has this Grand Prix contributed to the image of Russia as a legitimate player? I suspect your answer will be decided by whose news you're watching.
Click to expand

Bottas won here last year, if he drives like he did in Singapore he sure as hell won't repeat that in 2018.

I wonder if Williams and Toro Rosso will announce they 've signed Russian drivers for 2019?

Oh boy, first Singapore and then this one, which is almost guaranteed to be a stinker. Roll on Suzuka.

Trying to remember key incidents as we had

Well, this is a race track where Ferrari should have the edge of Mercedes, but I also said that about Monza and Singapore.

Valued Member
Ferrari might well have the edge on pace of one of the Mercedes, the other one appears to be a bit too quick.

Contributor
Well the good news is that the F2 and GP3 races at Sochi are always brilliant. Bad news is the F1 races are extraordinarily dull.

So in summary - watch the support acts and go to the bar when main event is on.

Can't wait to read Olegg's version of your write-up TBY

Contributor
Ferrari are unfortunately to busy shooting themselves in the foot, to win races at the moment. So I imagine Sochi will be another dull race. I’d love to be proved wrong.

teabagyokel said:
Well, the Wikipedia page does not state the height of the spire of St. Michael's Cathedral.
Click to expand 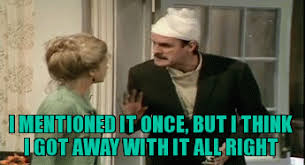 Its got nothing on the fabulous Salisbury cathedral though

Thank you Greenlantern101 I feel better for knowing that

I also hope it doesn't rain, how would the British teams cope if it did?

At least this one is a highlights only race, how they're going to fill even that amount of time with this race is beyond me. I imagine it will be a challenge if the other races from here are anything to go by.

Is it going to be slushy?

Contributor
Will the top 3 be forced to shake hands with Putin again and be respectful on threat of Novichok?

Valued Member
It will be interesting to see how Bottas gets on. Last season his performances tailed off badly after Spa, and this year is showing strong signs of following the same pattern. But - is it an issue he has with late season races and loss of motivation, or is it just a coincidence that his weakest circuits fall at that time in the year? Well, last season Sochi was in April and Bottas was terrific, so we might get a partial answer to the question this weekend.

A question that few others care about, probably, but there it is.

I care if you care, Galahad!

Bottas wants a win against his name for a start

Valued Member
Greenlantern101 - That's not the one in Sochi!