Staff Member
Here it is then (already revised due to mistakes in the earlier versions). 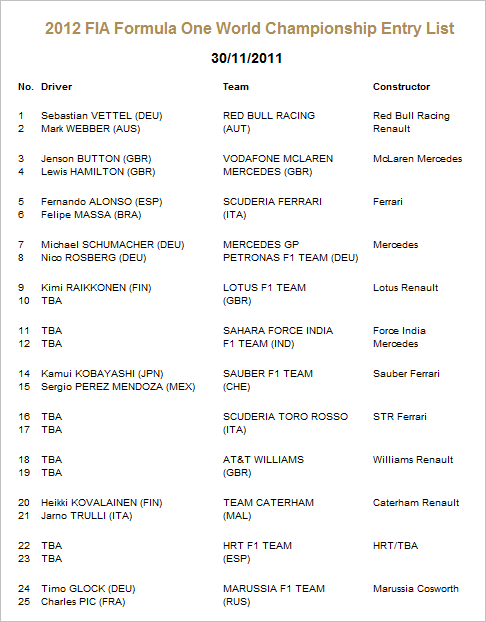 Contributor
May sound ignorant of me, but why is there (CHE) underneath Sauber, instead of something like (SUI)

Contributor
They are from Chelsea that's why

Valued Member
Switzerland's official name is the Swiss Confederation (Confœderatio Helvetica in Latin) according to Wikipedia. I suppose when you have 4 languages you fall back on Latin for official stuff.

Valued Member
Only 3 teams registered as British, that must a new low? You also have to question the point of this list when most of the drivers names are TBA unless it just to make sure the teams pay their bond.

Renault are now Lotus and British.

Virgin are now Marussia and Russian.

Contributor
I thought De La Rosa signed for HRT? Unless he hasn't been officially confirmed, of course.

Supporter
Good point mjo, I wonder if someone didn't tell him that the "seat" he's been offered was an Alhambra...

Staff Member
Just too late with the paperwork I expect.

He has been confirmed by HRT officially.
M

Staff Member
There have been some in the past who have used it.
Just silly superstition, I agree.

There are obviously discussions ongoing between Renault and Petrov.
He already has a contract so to not be confirmed at this point suggests they are trying to get rind of him for someone else.

FB said:
Only 3 teams registered as British, that must a new low?
Click to expand


Nope. As recently as 2008 we had only McLaren and Williams flying the Union Jack.

Staff Member
Premium Contributor
Only one team officiaily left using the "Bargain Basement" Cosworth as well. I've no idea who HRT will end up using but if they can find enough spare change down the back of the sofa to buy a couple of Ferrari units then Marussia would be left even further behind. It's such a shame to see Timo Glock who is a driver with some talent banging away at the back like that.

Valued Member
I'm sure it would help HRT with the design of next year's car (supposedly well underway) to know which engine they were going to put in it. If only for this reason I think Timo will have at least two drivers to play with next season.

Off-topic, I read a throwaway line in Autosport from Gary Anderson after Abu Dhabi, commenting that Williams appeared to have the largest radiators in the pitlane. I wonder if there's a heat rejection issue with the Cosworth - and if that might explain the overall poor performance of their car this season, with no other glaringly obvious cause.

Contributor
The HRT engine situation is just them failing to do paperwork right? I've heard no rumours they plan to run anything else but Cosworth and if they did I'm sure they'd have made a bit more song and dance about it all.

Unless there brokering some sort of deal with the second driver - Ok we'll run Bianchi/Bird in our second car if you give us last years Ferrari/Mercedes engine.

Can't see it though - I bet it'll be Cosworth.

Galahad said:
Williams appeared to have the largest radiators in the pitlane. I wonder if there's a heat rejection issue with the Cosworth
Click to expand


That, or else the tight packaging of the FW33's rear end meant that they didn't get so much passive cooling. Red Bull, McLaren and, to a lesser extent, Ferrari and Mercedes all have much larger engine bay vents than Williams.

Anyway, back on topic. I too can't see HRT running with anything except Cossie power next year, if only because no major manufacturer will want to be associated with them...

Pyrope said:
if only because no major manufacturer will want to be associated with them...
Click to expand


I think they wouldn't mind, provided HRT pay the bills...ah, hang on...

Pyrope said:
Anyway, back on topic. I too can't see HRT running with anything except Cossie power next year, if only because no major manufacturer will want to be associated with them...
Click to expand


Ferrari used to be fine running round at the back with the Minardi's. Ford with the Pacifics too so don't think thats the case just doubt HRT can afford anything but Cosworth.

Having said that the new investors did promise a more 'Spanish' feel to the team - Could we see a SEAT F1 engine? surely not.

Supporter
A good opportunity should some Spanish empresario want to revive the either the Pegaso or Hispano-Suiza names! Surely nobody is trying to do that, are they?


Ok, so both brands are, to the best of my knowledge, now owned by Fiat, but still, the Z-102 was a very fine-looking automobile!
S

Its funny how no one pays attention to that Marussia rookie..

The Next British Formula One Driver.
2 3