I believe at the hairpin at the end of the backstraight a British fan chucked the flag over for him at the grandstand.
Click to expand

It was actually being held by a marshal at the start of the pitlane and Lewis slowed down and put his hand out to get it. The marshal gave it to him and on he went.

ExtremeNinja said:
I wouldn't say that. Alonso's defensive driving on the hairpin was extremely good. Lewis tried to pressure him into a mistake but Alonso wouldn't be bullied.
Click to expand

Interesting perception from Lewis, regarding the hairpin.

Contributor
Well I'm pretty late, plus HammydiRestarules did my work for me. Thought I would also disappoint Fenders ( Fenderman ) by posting this late

The top 3 where superb, most notably Grosjean and Perez in my opinion, managing to one stop compared to the others.

Hamilton was the fastest on the soft tyres which helped him gain the lead and to pull away from the other two, with the track getting warmer, he was able to push and be faster as the weather suited his car. Raced well, and was undoubtedly going to be the winner when he pitted for the second time, as the Alonso and Vettel left it too late to pit.

Grosjean suddenly came from no-where to finish on the podium. Managed to make those soft tyres work for 50+ laps and still have the pace, the warmer the track temperature, the faster the Lotus cars go, and we saw that with Grosjean.

Probably my driver of the day, Sergio Perez. His strategy was similar to Grosjean's, but done the opposite way, which was very surprising, starting from 15th then finishing 3rd?

woow!! Kept posting fastest laps, overtook Rosberg when he needed too, then sped away, chasing that podium which he, and probably all of us, thought he wouldn't have achieved, judging by his starting position.

Vettel made the best of a bad situation, didn't have the fastest car out of the front running three, but he still hung in there, raced well, and did a daring overtake on Alonso into the hairpin, rather than waiting for the DRS zone. Pitted too late, but even so, it got him 4th place, rather than what probably would have ended up as 8th. Damage limitation from him.

Alonso was my favourite for the race after the first round of pitstops, but he just didn't have enough compared to Hamilton. Ferrari took the gamble, and it didn't pay off, but at least they tried it. But we all knew once Hamilton started setting the fastest laps on his spanking new softs, that Alonso was a goner. Luckily for him, the race ended when it did, if it ended a lap later, he would have been down in 8th-9th, due to the way his tyres fell off the clip. Surely the favourite from the championsip since Ferrari have made a turnaround.

Rosberg had Hamilton's strategy, but pitted several laps too early, but he raced hard to earn his fifth. Been consistent ever since his first race win in China, and basically the only Mercedes car running in the championship

Webber just looked like the guy from last season, stuck in traffic most of the time, but the Red Bull strategy didn't bail him out this time, didn't have the speed of Vettel all weekend. But scored some crucial points, only leaving him 9 points behind Hamilton.

Raikkonen hampered by the differential problems in qualifying, how he drove a car with a dodgy diff is quite astonishing really, qualified 12th was always going to be an up hill battle. Started on the prime tyres rather than the options probably proved costly, as if he didn't the other way round like his team mate, he would have finished higher up. Another mishap for Lotus's lead driver, the championship is slipping away from them, especially when the track came to them this race, another mis-oppurtunity.

Some valuable points for Kobayashi, like Raikkonen, should have went with the strategy of his team mate, as he would have finished higher up.

Oh Felipe, could have been on the podium, just when he gets a lucky break, he spins the car, which to be fair to him, was a very odd spin, nearly completed the corner and the car spun. Nevertheless, a good recovery from him to gain a point, was always going to be hampered by the strategy after the spin. Looks as if he's getting better, but certainly not back to his best.

The less said about Jenson Button the better. Finally in the Toro Rosso battle, Ricciardo beats Vergne in the race for the first time since the opening round!

Anyway, not a spectacular race, again, it had to be watched late Sunday/early Monday. Not much of a grid change at the start, which was very surprising, along with no tangles either. I was hoping for something to unfold, and it did, only 40-50 laps too late. It wasn't a stunner of a race by all means, nor was it one of Canada's finest. The DRS was not at all needed on this track, not only did it lead to easy overtaking, it also never gave those that where faster than those ahead a chance to use their DRS and get ahead of the driver infront, who also had DRS available too. Bit of a contradictory there eh?

With the championship unfolding, you can now see those who are slipping away, Jenson Button the most notable out of the runners, he's only scored 2 points in 4 races, for a world champion in a top car who was on top form last year, is poor. Then there's the Schumacher, 5 retirements from 7 races, 4 of them not being his fault, and the races he's scored his points in where also hampered by Grosjean in Malaysia, and a DRS failure in Bahrain knocking him out of the first round of qualifying. Could be leading the championship, or be right in the title hunt, without these problems. Then there's both Lotus drivers, one is hot and cold (Grosjean), the other just plain unlucky, their car sensitive to the weather doesn't help matters, then they have issues with the tyres in qualifying, if they get that sorted, this pair are to watch out for.

Rosberg is just staying in it, by being consistent, with Mercedes best tracks yet to come, it wouldn't be fair to rule him out.

I forgot to add, another good example of Lewis of using his gray matter, and thinking ahead.

I'm kind of confused, where did the need for all these examples come from all of a sudden?

Just couldn't pass on an exmple, that anyone could clearly see for themselves.

. I just didn't see anyone criticising Hamilton so that's why I don't understand why there are examples of Lewis using his brain getting thrown around... But fair enough
M

. I just didn't see anyone criticising Hamilton so that's why I don't understand why there are examples of Lewis using his brain getting thrown around... But fair enough
Click to expand

I reckon you know the answer to that one buddy 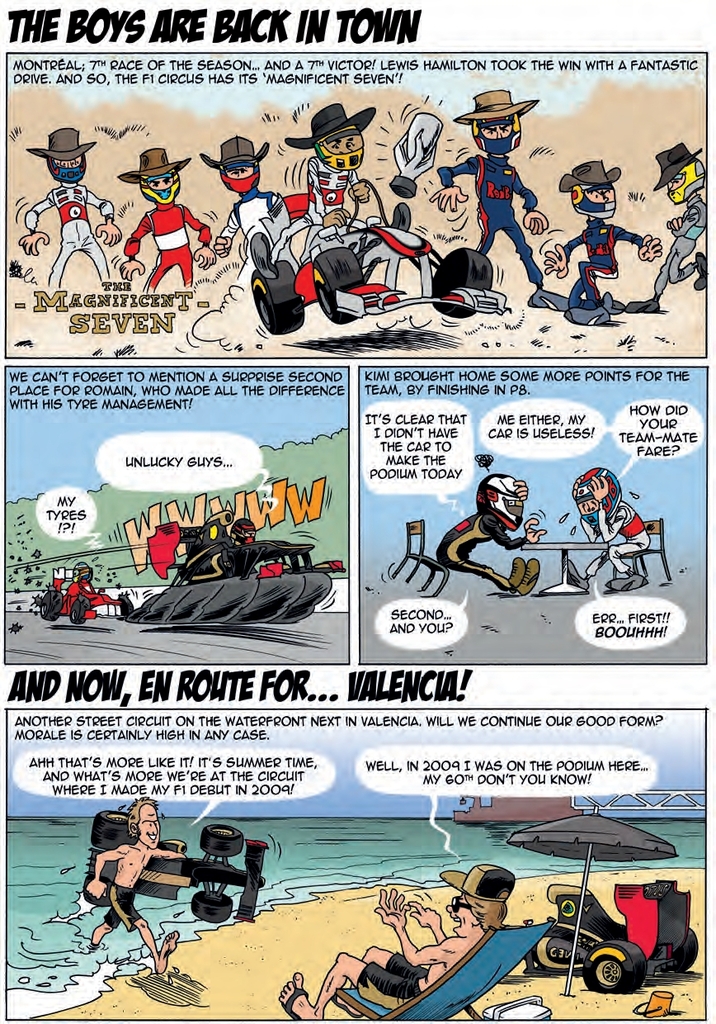 Contributor
That's great dude and it is as F1 should be looked at just a bit of fun lets have less angst guys, all this my guy is better than your guy shit just winds folk up just chill it ain't no biggy.

That is wind as in rotate not wind as in that blowy thing that turns yer brolly inside out...