Valued Member
For the fourth intra-team comparison thread we move on to Sauber. How did Sergio Perez perform in his debut season against the incumbent Kamui Kobayashi? 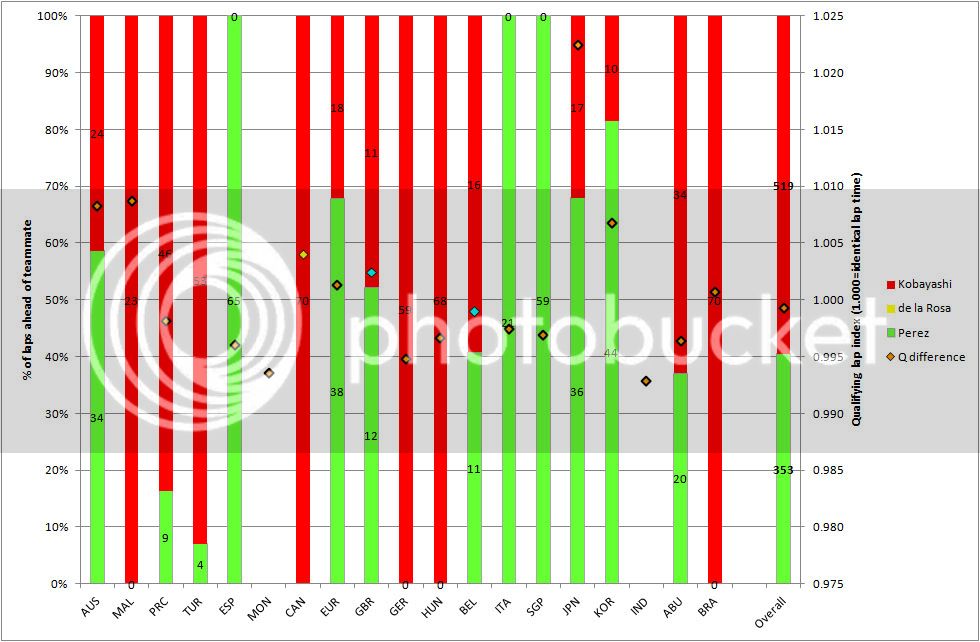 
A little bit of a season of two halves here, with Kobayashi looking generally stronger over the first part, with Perez improving his qualifying from the German GP onwards and performing better in the races too. Note that Pedro de la Rosa took Perez' seat for the Canadian GP and therefore the yellow diamond is the comparison between him and Kobayashi - Kamui remained ahead of Pedro for the entire race.

Two things were notable from going through the lap charts to produce this. First, that Kobayashi was very often leading during the first stint even when he had qualified behind - perhaps he was better at starts, or in the first lap cut-and-thrust. Secondly it was noteworthy that usually, Perez was the driver who stayed out longest on a set of tyres out of the two.

Contributor
These two are a really fascinating match up in my eyes. They both had excellent moments in 2011, but they also both had some weekends to forget. They have both been highly touted at times, but perhaps they now risk dragging each other down too? I think one of them has to comprehensive beat the other to make a big career move - the money might be on Sergio to do that, but Kamui is clearly better in some areas (like overtaking).

Valued Member
I think I would agree with that Jez, Sergio appears in a stronger position to contend for a future Ferrari drive at this point, but he will need to clearly assert himself over Kamui in 2012 for that to happen.

Kamui's opportunity to progress may come if and when the Japanese manufacturers return to F1, but if he has an exceptional season then anything's possible. He probably needs Sauber to build a car more suited to his attacking style, too.