Valued Member
With this team's superstar Robert Kubica sidelined by a horrible rally crash on the eve of the season, veteran Nick Heidfeld was drafted in to join Vitaly Petrov in the Russian's second season. 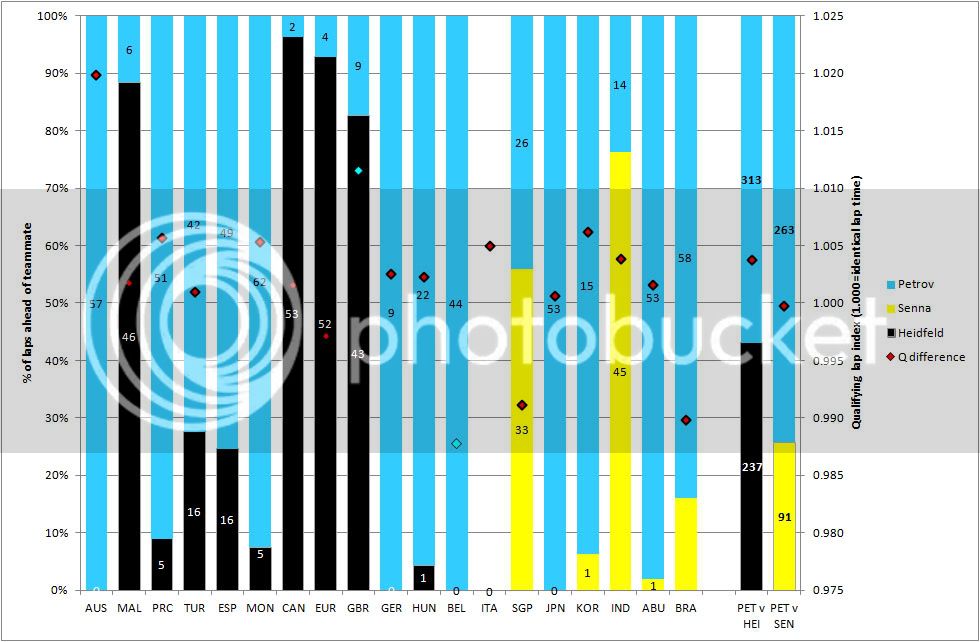 
Initially the Renault's forward-blowing exhaust proved very effective, each driver scoring a podium finish in the opening two races. As others scrambled to copy Adrian Newey, however, the team (whose exhaust layout left them unable to do likewise) was rapidly left behind. Heidfeld's difficulties in qualifying were well-publicised and ultimately contributed to his replacement for the Belgian GP, although on 3 occasions he finished ahead of Vitaly in the race having started behind him.

From Spa, Bruno Senna took up residence of car #9 and made an immediate impact, putting the car seventh on the grid in wet conditions in qualifying and comprehensively beating his team-mate in the process. From then on the pattern was extremely variable, with Senna much quicker at Singapore and his home race at Interlagos, but outqualified by Petrov at the other events. A number of incidents may have betrayed a certain amount of race-rustiness, and contributed to Vitaly leading his team mate for almost 75% of the races in which they were paired.

Both drivers are currently unemployed for 2012, the newly rebranded Lotus team opting to lure Kimi Raikkonen out of retirement and pairing him with GP2 champion Romain Grosjean.

Valued Member
Bruno appears to have his uncle's talent for qualifying but not for racing, although Ayrton never managed to convert as many of his great qualie laps into race wins. Next season will be interesting to see, I have a horrible suspicion Kimi's return could be more Schumie than Niki...

These stats also seem to justify the team's decision to pension off Heidfeld, although I'm sure there are other factors behind the raw numbers.

FB said:
These stats also seem to justify the team's decision to pension off Heidfeld, although I'm sure there are other factors behind the raw numbers.
Click to expand


I dunno, Senna doesn't look too good across these stats. There's more black to the left than yellow to the right, even if the Cyborg wins in both instances.

When mechanical grip was more important ..it was found wanting - they admitted it struggled on slow speed corners

His qualifying was his achilles heel and interestingly slower than Petrov which is what concerned Bouillier. Therefore he was starting too far back and it was mainly damage limitation or fighting for scraps

There appears to be some uneasy tension between the guys at Enstone and Genii capital the owners ...throw in the plans of Proton - Dani Bahar's grand scheme next year will be important for the team.

The row over the Lotus name did not help either..now they've got the name its time to shut up and produce the goods on the track

Has anyone considered are Proton bothered that they run an F1 team powered by a rival car manufacturer?

Signing Raikkonen and Grosjean is a statement of intent...although the question mark remains do they have the resources to compete with the top 4

AS for Petrov and Senna

You could say both were unlucky given the team's situation

Senna - clearly done for marketing reasons with a Lotus Renault as it were like his late uncle. Having shown promises at both Spa and Monza where he knows the tracks...he too failed to really build on the opportunity given to him