Valued Member
After all the talk of testing and DRS, the first big indication of where everyone stood came at Melbourne, at the season opener. Not a huge surprise. And, in a sense, we're exactly where we were as we left Abu Dhabi in November.

Again, Sebastian Vettel and Red Bull took pole, although by a huge margin here compared to Abu Dhabi, and again his team-mate Mark Webber looked far behind. Maybe the events in Abu Dhabi have fatally wounded Webber's confidence. However, Vettel was immense again, failing to show the signs of even a micro-mistake. The race was won, though, by his start. He was a long way clear by turn 3, bringing to mind his excellent starts at the start of last season far more than his rightward veers of the mid-season.

As in Abu Dhabi, it was Lewis Hamilton starting and finishing 2nd. The way he failed to lose any time despite significant damage to the car was impressive, although he was the first to learn that staying out longer for pitstops is no longer the advantage that it once was. His team-mate probably had the pace on Webber, but a poor start saw him stuck behind Massa, and his penalty ruined his chances of a finish his pace deserved.

If Massa thought that the pecking order was equalised at the start of a new season within Ferrari, he was sadly mistaken. Ferrari cleverly swapped positions to force Button to either take a stop-go or let them both through. However, it was also true that Massa did not nearly have the pace. Ferrari seemed the third fastest car in Alonso's hands, but not the Bull-challengers they were predicted to be.

Lets look at the positives for Nick Heidfeld; he finished. As for his team-mate, he was excellent. Petrov seems to have taken the mantle of replacing Kubica on, putting in a Kubica-esque act of defiance in the face of faster cars. His great start saw him into 4th, and he impressively outthought Mark Webber to the line. Another Abu Dhabi continuation!

Toro Rosso did not get into Q3 at all last year, so Sebastien Buemi was treading new ground for a Toro Rosso manufactured car (rather than a Red Bull 'B'). He remained impressively steady to take 8th position. Alguersuari should have been close behind, but collided with Michael Schumacher.

Force India can explain their points finishes by a lack of finishers elsewhere. They never looked like they had any pace at all, and pulling team-orders in their position leaves a bad taste in the mouth. It looks a long, hard, mediocre season ahead for the Force.

Team Lotus and Virgin finished one car each (essentially) but found themselves no closer to the midfield than they'd been previously. The Malaysians seem to be clear of the Yorkshiremen, but neither will have seen much this weekend to justify their continued F1 projects.

At the race's conclusion, it would have been said that the most impressive midfield team were Sauber. Perez and Kobayashi were both impressive, with the Mexican taking to F1 like a duck to water. Sadly, both cars were illegal, and Sauber return empty-handed. That Perez was able to stop just once, however, is intriguing!

Williams' promise was shown by Barrichello's progress up the field but an amateurish moment in the race when attempting to dive up the inside of Nico Rosberg to add to his mistake in Qualifying meant the Brazilian had deservedly scored nul points. It seems most of Williams' points will come from the veteran, since Pastor Maldonado did nothing before his failure or in qualifying to suggest he's not a pay driver.

Mercedes were disappointing in qualifying, but it is difficult to see where they are with two DNFs caused, by and large, by being clouted by the two longest names in F1 (Alguersuari and Barrichello). Schumi being outqualified by Nico again this season as he was yesterday will lead to doubts over the third year in Project Midlife Crisis.

Liuzzi was 1.5 seconds clear of Karthikeyan in the HRT in qualifying. Even if they do compete, they don't look like they have a competitive driver line-up anyway. Sadly, it looks like HRT's time in F1 will be up shortly, they're not even competitive vis-á-vis Virgin!

All in all, DRS did not produce widespread overtaking, but I'm cautious of knee-jerk reactions 2010-style. The fact that Massa, Webber and Heidfeld look so poor compared to their team-mates; poorer than anyone looked in comparison last year, may suggest that the power is somewhat back with the driver. And, at the end of the day, that can only be a good thing.

teabagyokel said:
All in all, DRS did not produce widespread overtaking, but I'm cautious of knee-jerk reactions 2010-style. The fact that Massa, Webber and Heidfeld look so poor compared to their team-mates; poorer than anyone looked in comparison last year, may suggest that the power is somewhat back with the driver. And, at the end of the day, that can only be a good thing.
Click to expand

I would like to think that this true - my interest is, and always has been, driver-lead rather than the machine itself

Valued Member
Don't forget they can tinker with the DRS. It might be more useful in Malaysia with the long straights at the start and end of the lap. Frankly, it wasn't a classic, but it was absorbing, there was action at the front all the way through the race, usually involving a Ferrari.

Contributor
I thought it was a very entertaining and absorbing race.Many questions before ie would Pirelli tyres be the load of junk forecast by so many.They worked well.
Would the DRS work.It didn't.
Some great performances from Petrov and Perez in his first F1 race.
Looking forward to next week.

Valued Member
Thanks tby. Across several if not most of the teams the margins between team-mates were the biggest I've seen for a long while, and it will be interesting to see if this persists through the season, or if some of them have just 'got to grips' with the new requirements better.

I think it's too early to write DRS off. Melbourne was never going to be the best place to assess it properly, and arguably it was put in the wrong place. Button's second pass on Massa was DRS-assisted and looked almost too easy, so it's a mixed picture.

Not sure we can judge them yet. The way Barrichello was scything though the field suggests there is some pace there; he had a bad weekend and it would be wise to reserve judgement.

teabagyokel said:
Ferrari cleverly swapped positions to force Button to either take a stop-go or let them both through. However, it was also true that Massa did not nearly have the pace.
Click to expand

Everyone seems to think that this was quick thinking by Ferrari and that they orchestrated the swap from the pitwall, but I'm not so sure.

After Jenson "got by" Felipe, Alonso had a good run on Massa and looked like he was going to fly by, but in similar fashion to the way he was keeping Button back, Felipe swerved slightly and blocked Fernando. This movement put him off the ideal racing line, and he subsequently went very deep into the corner, allowing Alonso to take the spot soon after.

Felipe was in no mood to give up a spot to anyone yesterday, and he definitely defended against Alonso, which ultimately put him out of position and allowed Fernando to sweep by.

Am I the only one that saw it this way? Video evidence will be produced in due time if necessary.

KekeTheKing said:
Everyone seems to think that this was quick thinking by Ferrari and that they orchestrated the swap from the pitwall, but I'm not so sure. Am I the only one that saw it this way? Video evidence will be produced in due time if necessary.
Click to expand

I kind of agree Keke, I've just posted in another thread that the move was either quite clever or co-incidental. But it all happened so quickly in real time that the more I think about it the more I am inclined to think it was the latter.
J

I agree with the comment about the power being more with the driver. The top 4 drivers had different cars this weekend and some of the gaps were out of the ordinary. This might be because of the different driver aids giving advantage to drivers who get on the DRS quickly or press KERS in the right place. If this is the case, things might become very interesting if the gap between cars become smaller. We might see a few Hulk-esque surprises.

Valued Member
This is from Gpupdate.net

Perez went from lap 24 on options! That is impressive!

Valued Member
Comparison of Perez' long final stint on option tyres with Kobayashi, who changed from option to prime on lap 32: 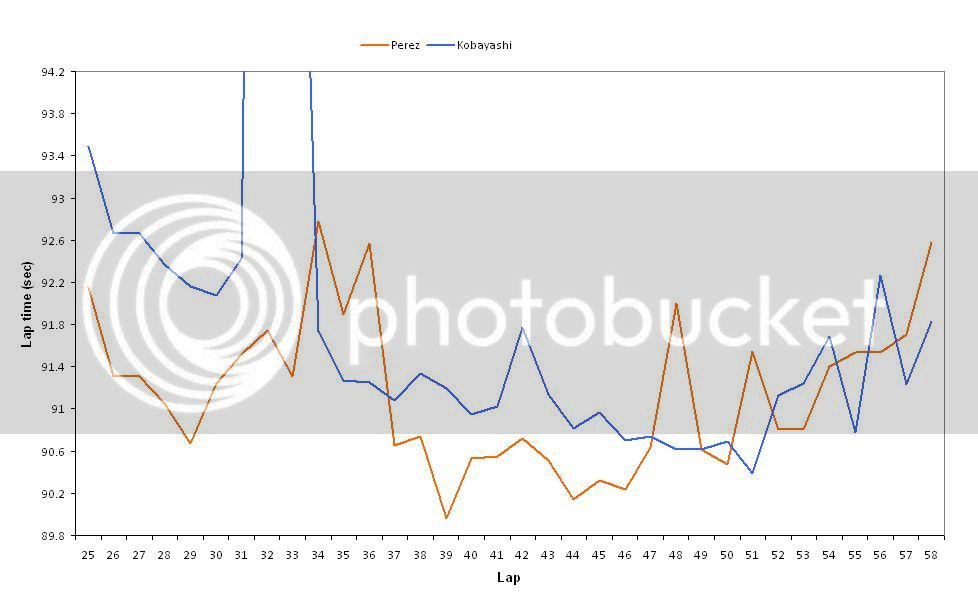 Did Sergio spending 8 laps stuck directly behind Sebastian Vettel after his pit stop hamper him of help him? Would he have worn out his tyres faster if he had gone quicker earlier?