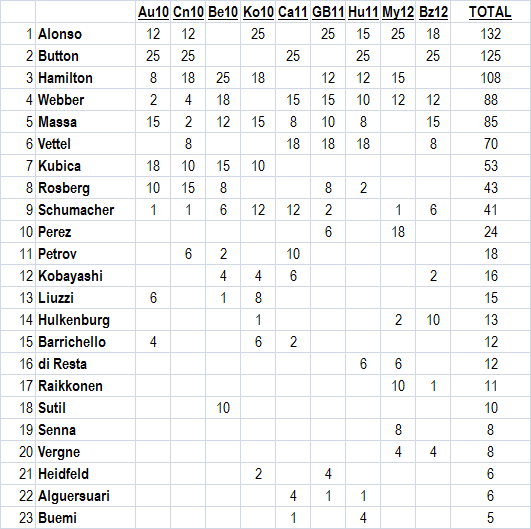 1) Alonso is fabled to be good in the wet and you've shown he's got more success by finishing
- Was 2011 Brit GP a wet race ? I did not see the race fully

Premium Contributor
Britian 2011 was partially wet, towards the start of the race.

Valued Member
Those are the Grand Prix listed in The Clip the Apex™ Overtaking Database™ as either "Wet" or "Varied" races.

Britain in 2011 was largely dry after an initial flurry, and Button retired from it due to pit-bungle, but there had to be a consistent set of rules rather than a gerrymandered Button victory.
M

Premium Contributor
Yep. 2 of those DNF were his fault, 2 weren't.

To be fair to Vettel he did lose 2 wins in the wet due to poor reliability, Oz 2010 was dodgy brakes and South Korea was engine. But on the flipside they've all had bad luck somewhere...

Contributor
teabagyokel Nagdam it I forgot about Malaysia this season!

Valued Member
No surprise there. By all accounts he's still very quick on a low-grip surface!

Il_leone said:
teabagyokel
1) Alonso is fabled to be good in the wet and you've shown he's got more success by finishing
Click to expand

Il_leone, I noticed that Button had more wins than Alonso. I wasn't saying he was better than Button (and now I'm not saying he's worse than Button, I'm not commenting at all on their relative performance)
Winning three out of 9 races is not "having more succes by finishing", it's good. And apart from that he scored 2 more podiums and two 4th places. There's only one driver who won more wet races in those three years. There's no driver who got more podiums than he did. He scored more points than any other driver in the wet.
How can you say that's anything other than good? If that's not good, all the others except Button must be total rubbish, because they all did worse than Alonso (less wins, less podiums, less points, although Webber and Massa had more finishes, bu8t seeing where they finished you can hardly call them better).

Valued Member
Il_leone - It does paint a slightly different picture. A picture that Galahad's point from earlier may pick up on...: 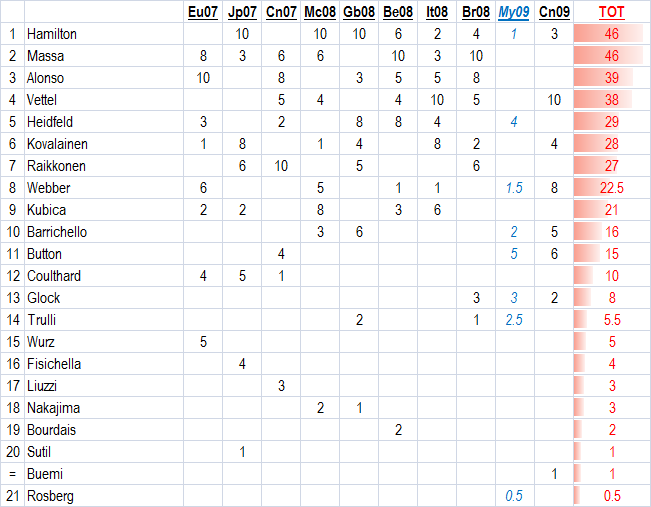 Contributor
Rosberg only managed to achieve half a point out of 10 wet races?

Valued Member
Slyboogy - Was handily scalped by Wurz and Nakajima.

Valued Member
You know who isn't on this list? Maldonado.

Valued Member
Galahad - Not entirely surprising! Only an engine failure cost him in Malaysia though...

It does show Hamilton was supreme in the wet.. the one he messed up was CHina 07 which cost him the world title and SPa 08 he was demoted for an illegal pass