Simple question, list your 5 favourite F1 races you have seen on TV. Mine are (in no particular order)

1. 1986 Australian GP - Prost vs. Mansell vs. Piquet in Adelaide. As a book I have says: "Drama of the Decider"
2. 1993 European GP - I could watch Senna's first lap over and over and still never understand how he did it.
3. 2012 Brazilian GP - My personal favourite title deciding race, it wasn't over till the last lap
4. 2006 Hungarian GP - Watching Alonso carve through the field early, then fall out, letting Button grab his first win after also carving through the field. Schumacher's dramas at the end completed it.
5. 1992 Monaco GP - Those last 10 laps. WOW.

I'm assuming these were some of my "favourites" but it's only because they're the most memorable. Not necessarily in order of preference though ...

Monaco - 1971 - Jackie Stewart wins Monaco almost in slow motion in probably the best of Ken Tyrell's cars. Thanks to Roman Polanski his film - Weekend of a Champion - of that race was the closest we got to the kind of whole weekend coverage we have today. Only drawback was having to wait so long after the race to see it - I didn't see it on the telly!

Hungary 1997 - Damon Hill's incredible race leading drive in Tom Walkinshaw's Arrows only to be robbed of the win at the last fence. Still the best ever drive in the history of the now defunct Arrows team.

Silverstone - 2008 - From fourth on the grid Lewis Hamilton wins a sodden GP with only Nick Heidfeld and Rubens Barrichello finishing on the lead lap over a minute away.

Fuji 2007 - Another wet race in which Lewis Hamilton demonstrated his skill on another of the trickiest tracks for such conditions, whilst team mate Alonso demonstrated that he was only human in spectacular fashion.

In truth, I have seen so many great races that I could easily replace that list ten times over and still not make my mind up ... and of course that's only F1. Ask me the same question about motorcycle racing and I would really be in trouble ...
Last edited: 8 April 2014

Contributor
1967 Italian GP-- Clark came from a lap down to lead the race! Ran out of fuel but still finished 4th.
1970 Monaco--The epic Rindt/Brabham battle with Jack into the bales on the final lap.
1968 German--Stewart at his absolute best in the worst conditions I have ever seen a race run in.
1968 British--Siffert scored his first F1 win driving for the great privateer Rob Walker
1997 Hungary--Hill nearly pulls off the ultimate underdog victory

Contributor
Fenderman posted a couple of the ones I was going to choose, but anyway:

Suzuka '96 - I remember screaming at Gerhard Berger to lay off, and cheering when Jacques' rear wheel went bouncing off...

Hungary '97 - The One That Got Away - for sake of a rubber washer, the greatest underdog win was denied, but it was a thrilling race anyway.

Spa '98 - we didn't hear EJ's team order until a documentary a year later, but Half Schu's face on the podium spoke volumes.

Hungary '06 - a proper fight-through-the-field win in mixed conditions, making the reigning Regenmeister look a bit tired in the process, but I couldn't believe I had to wait for another 2.5 years for...

Melbourne '09 - the ultimate underdog story, and a stunning 1-2 on comeback from the brink of dissolution over the winter. JB goes on to lead the points table for the whole season, as no single rival manages to string together a consistent challenge. A splendid year marred only by Legard's braying over the microphone.

Honourable mentions: Melbourne '10 (JB wins on his 2nd race for McLaren), Montreal '11 (JB goes from last to first, and frightens Vettel off the track on the final lap), Turkey '10 ("Crazy-gate" and "I thought we weren't racing"-gate), Bahrain '14 - just a thoroughly absorbing proper race. See? Not all Jenson wins, after all! 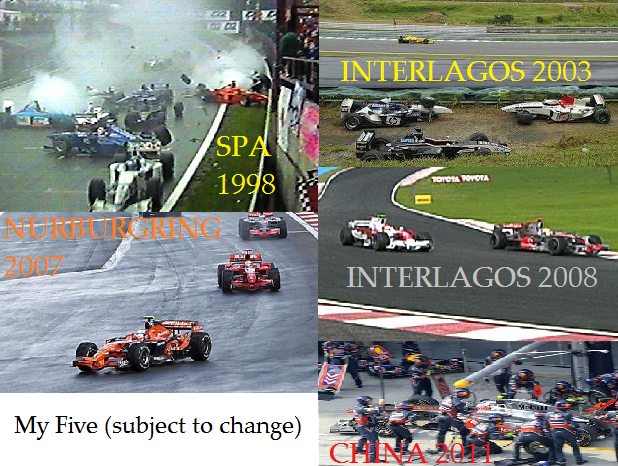 Premium Contributor
Spa 2008 - A fantastic duel between Hamilton and Raikkonen that had both me and my sister screaming at the TV, for different drivers! Nothing like a bit of controversy to go with it too.
Interlagos 2008 - Pure nail biter, I couldn't believe that Hamilton was going to get robbed again when Kubica decided to unlap himself.
Melbourne 2010 - I just remember this being a great race?
Canada 2010 - Simply brilliant, tons of battles, excitement with tyres and both Hamilton and Button made Alonso look daft.
Bahrain 2014 - Racing galore, no team orders the perfect fight between two team-mates.

Brazil 2008 - Need I say more
Germany 2008 - Poor strategy / SC Timing meant Lewis had a ton of time to make up. Incredible charge to the finish.
Australia 2009 - Hamilton dragged a dog of a McLaren onto the Podium with a stunning display of overtaking.
Turkey 2010 - Red Bull fireworks and a mighty tussle between Lewis and JB.
United States 2012 - Race long fight ended with an opportunistic overtake for the win.