As you need to be a customer to see the attachments though, here are some screenshots. 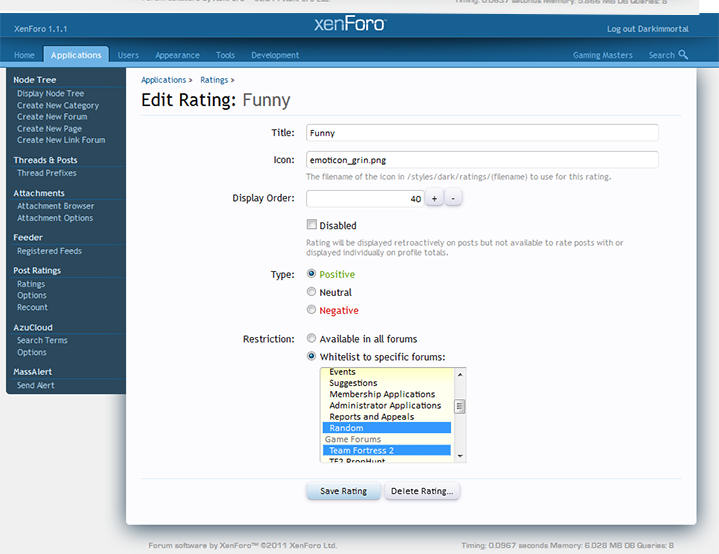 Instead of just having Like for a post, you can configure whatever you want: like, dislike, funny, clever, etc. It's fully customisable, so we can create whichever ratings we want.

The evidence would suggest it increases interaction, but I'm not sure whether it's suited to this site or not. Perhaps it only works on certain site types, such as gaming sites?

This is another paid add-on, so I will only consider it if there is a significant amount of support.
The last add-on (Bookmarks) has been used less than 10 times, so I'm reluctant to add or pay for anything else which won't be used.

Contributor
Sticking my neck out here and voting for 'waste of time'.

I think most are quite capable of explaining their own reactions, for good or bad, and is an unnecessary expense.

Staff Member
No worries Jen, all opinions are welcome.
I'm not convinced myself either...

I agree with Jen, I can't really see the use in it to be honest.

Agree with Josh and Jen. Can't see why it would be needed to be honest

Staff Member
Just to clarify, it wouldn't replace the Like system, it would supplement it.

Contributor
I'm unsure. I think I'm happy with the way things are but a finely crafted post sometimes warrants more than simply "like".
My Cardiganshire roots tell me it won't be worth dipping into the treasury for though!

Contributor
EDIT - I just spotted the "poor spelling" bit.
It's definately worth it, and if we could have one for grammer it would be unpossible not to want it.

Staff Member
The ratings in the screenshot aren't necessarily the ones which would be implemented.

Contributor
It is unkind to point up a 'failure' and, if it is more than a 'like' then that can be commented on within the reply.

Staff Member
I think too many are looking at the negative aspects.

You could just have positive ratings such as: Thanks, Informative, Funny, Interesting, Great, etc.

Contributor
I think it would be a good idea to show your credit of someone's amazing wit or brilliant joke, also, with things like the overtaking analysis, an 'informative' rating would show how useful it is compared to just a 'like'. These ratings would give some specifics to the 'like'. An example would be when, say, Marco Simoncelli died, I picked up on a post when someone said that it doesn't feel 'right' to like someone's post in that specific thread. However, with a more specific system, we would be able to credit someone's post without feeling, say, bad about it (in terms of that example).

Valued Member
I've occasionally felt it would be good to differentiate between 'I agree with this' and 'I like this', but it isn't something I, personally, would spend money on.

Staff Member
BTW, it only costs $30 so don't let the price be a major factor in your deliberations (I paid more than that for Chat and the custom BB Code add-on).

Valued Member
I dunno, I just can see it causing more trouble than it's worth

MCLS said:
I dunno, I just can see it causing more trouble than it's worth
Click to expand


I don't see why it would cause trouble. I don't believe we'd implement the negative ratings.

Contributor
I like the idea, but feel daunted by the sheer choice of options available.

Mind you, I'm the same when I go into HMV looking for a CD or DVD...