When does "real" F1 racing start for Hamilton ?

Hamilton is only beating Schumacher's win streak because he has Bottas to play "blocker" for him and it was plainly obvious today in Portugal on lap 19 ! !

Hamilton passing Bottas is plainly obvious proof that the only reason Bottas is on the track is to play "blocker" for Hamilton.

We all heard the "code" for letting Hamilton pass Bottas, is when Hamilton starts complaining about how bad his tires are. "Left front is pretty worn out" and Bottas moved right so fast it looked like he was going to make a deliberate right turn into the wall.

Just more physical evidence that "real racing" in F1 has become a joke to Mercedes Benz.

1st of all we know Lewis isnt being serious when he talks about "my tyres" its why many people covering F1 have a sweepstake in the past. on what lap he is going to complain. Bottas was trying to block Hamilton yesterday but as Brundle said its a lose lose with that DRS your either giving the inside line or the racing line. also Bottas was really struggling with any Tyre yesterday. he lost a net 33 secs in 50 laps ish. as he has said in a interview on sky sports f1 he is getting fed up with getting beaten by Hamilton every weekend & all the flack that comes with it in the media & online. judging by the odd reaction to Russia he wants to win & prove people wrong. but the stats are the stats since he's arrived

& Hamilton also i believe has gotten performance out that car that almost nobody else could. when your winning the world title in 2018 with 11 wins to teammate 5th place & 0 wins. he's doing something special. last yr he rode his luck

where do i put these for angel schumacher. because his teammates were never forced to pull over on the final laps

RickB said:
We all heard the "code" for letting Hamilton pass Bottas, is when Hamilton starts complaining about how bad his tires are. "Left front is pretty worn out" and Bottas moved right so fast it looked like he was going to make a deliberate right turn into the wall.
Click to expand

Before his pit Hamilton twice said that his tyres is enough good and was doing best laps until pit.
But Bottas before his pit was farther and farther from his teammate...

You can certainly come up with a lot of conspiracy nonsense to ease your suffering against of Hamilton's wins
but in reality ... it won't change anything

that me that not proof reading 🙈

And let's compare it with all the teammates 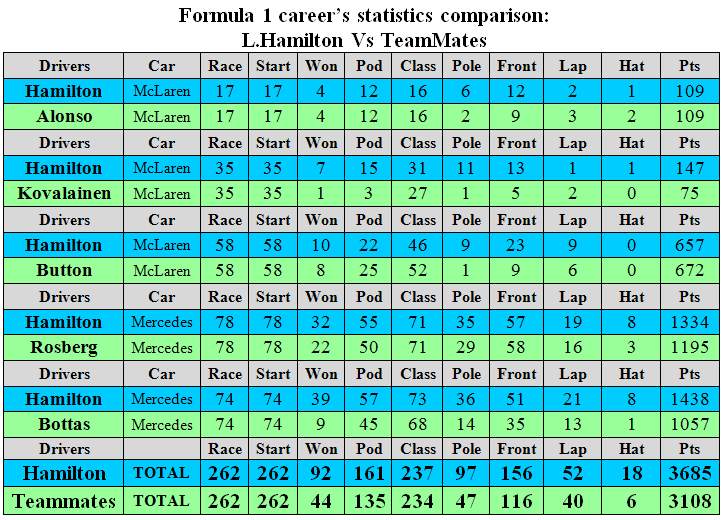 Could Alonso and Vettel actually co-exist at Ferrari?
2