You mean it's not Robert Tannion?

Valued Member
Ahhhh I've spotted a flaw - If Gordon is at a race meeting on a Sunday how does he get back in time for the program eh?

Tell me that then!

Contributor
What's more surprising is that Clarkson got paid 14 million quid last year and some of that money used to be in my bank account, okay only a tiny bit of it but it's nice to know where the money the BBC saved from binning F1 went...

Anyway it isn't him because I can reveal that in fact I'm the Stig.. 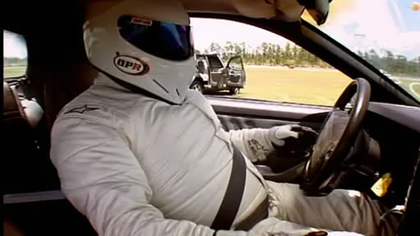 Staff Member
Premium Contributor
I have a feeling that the bulk of the money Clarkson got out of the beeb is from a percentage of the marketing of Top Gear and Top Gear products through BBC worldwide. I think I remember reading somewhere that he negotiated a deal to that effect when the BBC were looking at making cut backs. So yes, in a way, some of the money in his pocket has come from yours Mephistopheles but only if you'll admit to buying a "Stig" T-shirt, "Stig" action figure and Top Gear magazine.

Staff Member
Premium Contributor
Yeah, AD would be my guess as well.

Contributor
The stig talks to the guests. No way its Ant, his voice is to recognisable.
M

cider_and_toast said:
but only if you'll admit to buying a "Stig" T-shirt, "Stig" action figure and Top Gear magazine.
Click to expand

Contributor
Spent all his money on more "specialised" literature I reckon.

I think after they sacked Ben Collins, they began rotating multiple Stigs. At least initially. Multiple Stigs increases the potential for a leak, but it also gives TG a stronger hand for dispelling rumours that any given driver might be Stig #3.
"No, it can't be Anthony Davidson, because we filmed that episode on 22 Sep, and Davidson was driving LMP1 at Austin, Texas that weekend."

In the first few episodes after they un-Stigged Ben, I carefully scrutinised the new Stig's identifying features, and came away convinced they were using different drivers. I also believe one of them was Davidson. Or maybe McNish. Or maybe a munchkin.

Boris Becker videoed a conversation between he and The Stig when he was TG's star in their reasonably priced car (which was the second episode with The Stig #3). Becker posted the video on his website, audio and all, but Andy Wilman found out before I did and threatened him with excommunication from the JC fan club if he didn't remove it. So he did, unfortunately before I heard of it.

But those who did see it remarked that it definitely was a man's voice, which put to rest the rumour it might have been Sabine Schmitz. And some opined he sounded English or Scottish. The specificity of 'Scottish' gives it a ring of authenticity, as I doubt most of Top Gear's non-UK fan base could tell a Yorkshire accent from Yorkshire pudding. Much less English from Scottish from Ozzie. One said the accent sounded like Jackie Stewart, without further noting that Stewart is quite Scottish, which I thought quite telling. But he was quite short (Jezza even remarked in his opening monologue the new Stig was even shorter than the Hamster) and both Alan McNish and Anthony Davidson are 1.65m (5' 5") tall.

But that was four seasons ago. They could have created an army of cloned Stigs since then, like Star Wars storm troopers.
C

Valued Member
I am surprised people still try and guess who the Stig is. The Stig is only the Stig for the Star in a reasonably priced car and when the manufacturer doesn't deliver a driver of their own.

The reason the costume and the mystery is such is because each of the major manufacturers they get to "borrow" a car from in order to do a review and hot lap will want to deliver their own driver for the hot lap as despite it meaning absolutely nothing in real terms as a real test, the consumer will still go and buy a McLaren MP4-12C over a Merc SLS at the same price because of the hot lap times that Top Gear presents. Stupid I know but it is a good free sales boost for a car type that is very very hard to market.

So it doesn't ,matter who the "real" Stig is as they are very rarely the person doing to driving of the really stupidly expensive cars.
M

Contributor
I don't know about you canis but I am a consumer but my pocket does not stretch to 99% of the cars top gear test, which makes me believe that the show is just a bit of fun and not a consumer marketing platform, I also believe that the people who can afford those cars rarely watch Top Gear if at all...

But then again all the stars in cars do say they watch so I may be wrong on that score...

Thanks for the heads up on my question on excel formula, your solution worked a treat, although I kicked myself for not spotting the solution on my own I felt such an idiot...

A 135mph lawn mower is proof? I presume the Stig also owns all the supercars he tests!

Valued Member
Maybe it's Jan Lammers, he was tiny teeny.

I think the REAL stig gets switched off between episodes and left standing in the corner.

Dunno. Never saw his face. Could be Duane Allman wasn't really killed in that accident.


I don't mind that TG only has hideously expensive cars. It really isn't about cars anyway, it's about Clarkson. It wouldn't matter if they were reviewing hoovers or kitchen cutlery or adult incontinence products, it still would be about Clarkson's irreverent sense of humour.. Failure to recognise this is why the foreign imitations of the show all are dismal failures.

Except the Russian version. It was hilarious, entirely because it was so bad.

The Top and Bottom performing teams according to the BBC