The Eerie Silence - Wonders of the Universe!

Supporter
I was expecting a nice relaxing day, today. You now, a Sunday steeped in the art of chilling.

But then, I made two mistakes!

These two things may seem unconnected but, believe me, they're not!

I'll start from the beginning. The guardian magazine article related the tale of Paul Davies, the chair of the SETI Post-Detection Task Group. Sounds intriguing, doesn't it?! It was an article that related (in a slightly humorous way) the tale of SETI (the Search for Extraterrestrial Intelligence) and the setting up of a committee, "just in case" that aliens are actually found..!

The article referred to Davies' book "The Eerie Silence". I have been unable to fine a link to the newspaper magazine article, so a link to the book should suffice! To cut a long story short, the gist of the article was that after 50 years of listening for Alien communication, they've heard diddly squat!! Rather intriguingly though, there is a group set up so that, in case aliens are found, they have a 'strategy' worked out so they know what to do! (Shame they didn't have that for Iraq, eh!?) The article also mentions the deep space probe, sent up in the mid seventies, called Voyager...

The second part of this puzzle relates to a BBC programme about our solar system, called "Wonders of the Universe". Normally, that would be worthy of a thread all in in itself but, well, there have been so many threads of late, they're two' a penny!

The main part of the BBC programme was about the sun, obviously, but there was a small part relating to the Voyager probe... Which brings me to the point of this thread!

The Voyager probe project was in the seventies, and the two probes Voyager 1 & 2 were intended to be Jupiter and Saturn probes. Obviously, they became much more than that, and they are still functioning now, and should still be doing so until way beyond 2025!

I was so taken by the article in the Guardian, that I looked up the Wiki page on the voyager probe. Voyager1 is the furthest out and should be heading out into the BIG beyond soon!

Edit: Voyager 1 & 2 will be the first man-made objects to go beyond the known solar system!

The thought of these little ships sailing merrily on into the cosmos is amazing!

I wish these small bastions of humanity all the best on their journey into the cosmos....

In case that you want to read more about it, here is the wiki webpage for Voyager! And here is the BBCi player page for Wonders of the Solar System. The BBCi page has a time limit, though...

McZiderRed said:
The thought of these little ships sailing merrily on into the cosmos is amazing!

I know this thread is over a month old but I have a copy of 'Eureka', the Times' science monthly supplement, with a very fine Paul Davies article - it may be the same article as yours, it may be slightly different.

I don't have a scanner but it may be possible for me to take some good pictures of it and stitch them together to make it more readable, if anyone is interested.

Enja said:
I don't have a scanner but it may be possible for me to take some good pictures of it and stitch them together to make it more readable, if anyone is interested.
Click to expand

Even if it's similar to the Guardian piece, I would be interested. Although, if taking pictures of it turns out to be a right pain in the

, then don't worry about it.

If I have time they should be up a bit later today, I'll edit this post with them

Supporter
On the day that the Space Shuttle Discovery returned to Earth for the last time, it is apposite that there is an article regarding Voyager 1. BBC article >> Voyager: Still dancing 17 billion km from Earth

Launched in 1977, controllers at the US space agency's Jet Propulsion Laboratory in Pasadena, California, have instructed Voyager 1 to perform a roll in order for the probe to measure particles as it begins to leave the solar system. Apparently it takes 16 hours to send a message to Voyager 1..!

The probe is heading in the general direction of the centre of our Milky Way Galaxy and will, in the next few years, leave the space dominated by the influence of our Sun and enter the province between the stars - interstellar space.

In the next few years, Voyager 1 will have truly 'gone where no-one has gone before' and left the solar system!

McZiderRed said:
Launched in 1977, controllers at the US space agency's Jet Propulsion Laboratory in Pasadena, California, have instructed Voyager 1 to perform a roll in order for the probe to measure particles as it begins to leave the solar system. Apparently it takes 16 hours to send a message to Voyager 1..!
Click to expand

Carl Sagan - Astronomer, Astrophysicist etc, persuaded NASA to spin voyager 1 when it was 4 billion miles away and it took this picture. 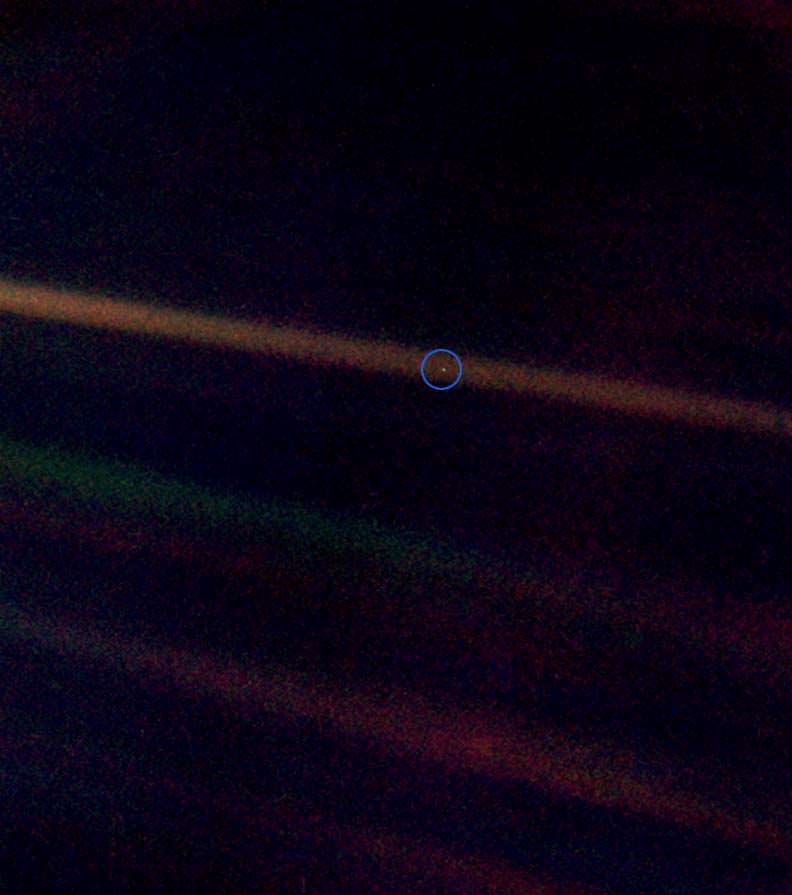 That tiny pixel is us.

And I can't explain how his explaination of it makes me feel.

Staff Member
That image makes you think doesn't it?

Reminds me of the thread I posted with the images of space.
http://cliptheapex.com/threads/space-the-final-frontier.395/

Speshal said:
That tiny pixel is us.

And I can't explain how his explaination of it makes me feel.
Click to expand