Contributor
So I promised this would be a spoiler free thread intro so I'm not going to tell you what happened. But what you need to do is read this intro, go watch it in catch up and come back and talk about it here! Absolutely brilliant and barmy race!

Race two is tomorrow and will be my go to watch on Sunday evening in front of all other sport that's going on including British Grand Prix.

So comments from now on can contain spoilers - so go watch it and come back once you've picked your jaw off the floor.
Last edited: 13 July 2019

Contributor
So where do I start on this one? Crazy crazy. Goes down to the last race with Buemi and Evans still in contention for that title which I would never have predicted in a million years. It's still likely to be Vergne with Di Grassi as an outsider but if you have another race like today then who knows?

Smash bang wallop will get the attention but some great drives and overtakes in there. So many I don't really know where to start. Evans from 13th to 2nd stands out. Where has that Buemi been all season? What the hell did Bird get a 10 second penalty for? Did Massa think he was on dodgem cars today!

Racing at its entertaining best.

oh my god what a race, that 10mins after the safety car came in at times so much was happening I was lost. frantic is a understatement. because my brain just couldn't process the ton of information coming its way quickly enough to understand what I was watching. 1st of all great defensive drive from Buemi because he was clearly not the quickest probally 6th quickest in race trim but great racecraft & still think he should be in F1. I like the irony of BMW finally getting past the Jaguar for 2nd only to be behind the sister jaguar a few mins later. also has Massa being taken lessons from Ocon because with all his experience you don't do that to championship leader. that was shocking

in a way Formula E will be happy because if vergne had finished 9th then, they could've had Ignomy of title being settled in qualifying if vergne had taken pole, or di grassi or evans hadn't. I would still give Vergne heavy favourite tag I backed him in Saudi arabia still back him now in that 9 out of 10 times he would win the title being 22 pts with 29pts left, its why he is 1/10 to win & Di grassi 10/1 Evans 16/1 Buemi 16/1. but while there is a chance there is always that 1 Kimi Raikkonen was 19pts behind with 20 in 2007 impossibly became world champion

also on a different point considering all the pre season hype & performance of the BMW, is it just be that would think BMW would be very underwhelmed with 5th in both drivers & teams championship
Last edited: 14 July 2019

Contributor
Yeah was thinking the same about BMW. Very different story to start of season. I personally think you have to lay the blame at door of the driver pairing because I think they've had a car that could get a result at every race.

As for today's race. If that has been F1 race we'd have been talking about it for decades. Where Formula E is concerned though you kind of expect they'll be another one just like it in a few races time. Really grown to love the commentary trio as well. The fact they gave up trying to figure out what the points for championship would be if it finished the way it was because they were certain it wouldn't finish the way it was and three personal highlights:

JN: incident at turn 9 under investigation......which one?


JN: How will Vergne go about approaching the race from his current grid position Dario?

DF: Well it's not ideal

JN: That's what we pay the big bucks for, analyse like that


DF: I'm sorry I called it fanboost when it's attack mode

DF: I wasn't apologising to you.


The rapport they have (let's not forget Bob) makes me not mind the mistakes. A bit like Walker and Hunt back in the day.
Last edited: 14 July 2019 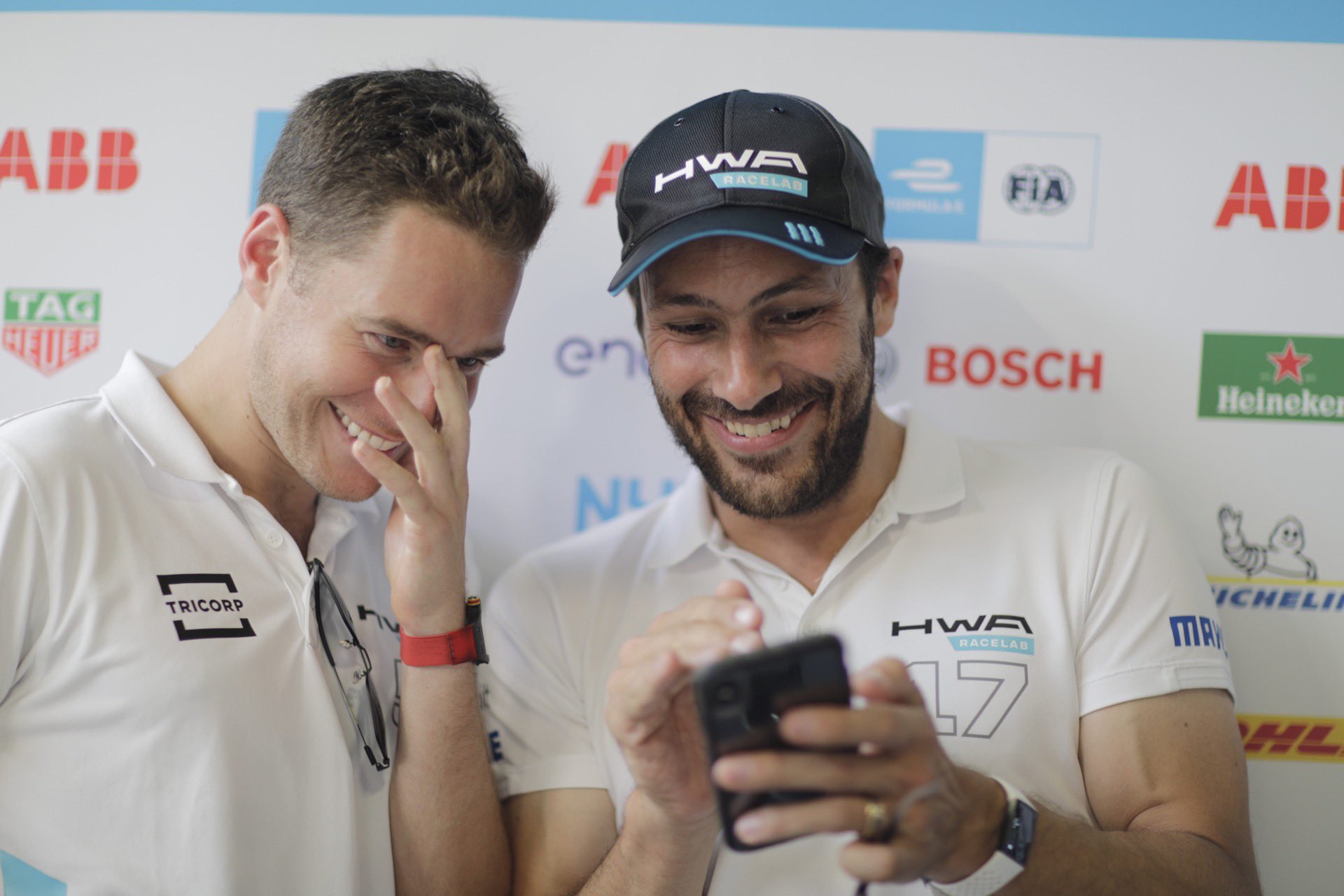 This is a picture posted on Twitter of Vandorne and Parfeet watching the Massa/Vergne incident at the end of the race (it really is). They obviously enjoyed it.

yeah that what I want from commentary, of course you want accuracy but you want to hear excitement you want fun, because commenters I believe set the tone for a tone of a sporting event. if they sound dour then it come across dour, if they are exicted it will make the viewers exited. it what makes murray walker & Martin Tyler so great


RasputinLives said:
JN: incident at turn 9 under investigation......which one?
Click to expand

well same as I said that 10 mins, I watched it but couldn't tell you what happened