Contributor
9 years and 3 billion miles after launching, NASA's 'New Horizons' space craft has awoken for the final time yesterday in preparation for its flyby of the Pluto system.

Its primary mission is the study of Pluto and its many moons. With 4 cameras (including infrared and ultraviolet), 2 mass spectrometers and a dust detector New Horizons should give us a treasure trove of information.

New Horizons will begin imaging on January 15th, by mid May we will have better images of the system than Hubble can provide, closest approach will happen on July 14th where New Horizons will pass within 7700 miles of Plutos surface.

This is the best image we have of Pluto and its moon Charon, taken by Hubble. 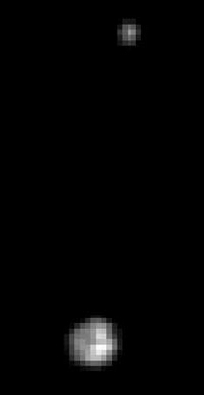 The link below captures the moment yesterday when the mission's control room staff received at 9:37 New Horizon's signal, indicating the probe came out of hibernation as scheduled:

Contributor
When they launched this rocket was Pluto still a planet at that point?

Who cares what they call it though? luto doesn't care. These classifications are just arbitrary.
M

Contributor
As far as we know Pluto has five moons, they are.
Not bad for a planet that isn't a planet..

Staff Member
Premium Contributor
Should provide some fantastic new information and at the same time, the better these amazing probes do, the more manned flight takes a back seat.
M

Contributor
I would love to be on a manned space flight to some distant planet or star just the thought of it really does jingle my jangle I wouldn't even have to have anyone else with me I'd be fine on my own....

Contributor
Shall we start some crowd funding to make your dream possible?

Staff Member
Premium Contributor
I'm in for a quid. Who's with me

Contributor
Got a wobble on.

Premium Contributor
It can't make it's mind up about the distance though.

Staff Member
Premium Contributor
Billions of dollars spent and for what? A badly pixalated blob. Waste of money if you ask me.

Contributor
No, no , Pluto, god of the underworld. Fancier of Eurydice.
M

Contributor
So what came first the dog or the planetoid?

Contributor
They were both uncovered in 1930, maybe they are twins.
M

Contributor
Maybe the moon should be called Minnie..

Contributor
They have just imaged Plutos other moons Nix and Hydra found by Hubble in 2005.
They think Pluto could have up to 10 moons. So plenty of scope for naming one Minnie.

If there are that many tiny moons in its orbit here's also quite a bit of scope for crashing into one of them before it reaches its target.

Formula E What to Expect from Formula E
2 3