Hi RasputinLives ....... Patrick certainly carved out her reputation on ovals, probably because by the time the fans started to take notice that's where most of her racing was taking place. To achieve what she has takes guts and talent and she deserves acknowledgment for her successes I'm sure you'd agree. To be fair to her, she raced Formula Ford with reasonable results in the UK finishing 2nd in the Formula Ford Festival, the best result ever by an American driver. She also ran consistently in the top three in Formula Atlantic which is run exclusively on road courses. I stand to be corrected but I don't believe they ran on Ovals in Formula Atlantic so given the opportunity I'm sure she'd adapt and learn very quickly. The question is, would she want to.

Contributor
teabagyokel - but Barrichello was good and a had already got a rep for car development which - and I'll stand corrected if I'm wrong - I don't think Di Resta had.

If you're going down that route though why not go Sebastian Buemi (3 seasons and 2 as Red Bull test driver) or Heiki Kovalinan (Enstone, Mclaren, race winner)?

Kewee - yes Dancia has done well on steet circuits but I still think Ovals is where she is at her best. Plus I don't think she'd want to come over to F1 because she has more to lose than to gain. Apart from Villenurve can we name anyone who has made the switch from Indy to F1 and made a success of it in the last 25 years?

Oh and I'm aware of her Formula Ford days. She was very close to John Button back then ya know.....or so some writer on Apex Presents has suggested.

Valued Member
RasputinLives - di Resta was boring, but did have some results which suggested a certain competancy, particularly in Bahrain and Singapore. Kovalainen does not convince me at all, but Buemi could be an effective option. Grosjean is also a possiblity if Lotus fold.

Kewee said:
One win at the Twin Ring Motegi.
Best three finishes in the Indy 500, 6th, 4th and 3rd.
Best points finishes for the Indy Championship, 7th, 6th and 5th.
She's been praised by many of America's top drivers, in Tony Stewarts words, "she's been successful in every form of motorsport she has competed in.
I'm not sure what the girl needs to do for you to recognise her obvious talent.
Click to expand

How about not wrecking other drivers because of her stupidity? For every driver who has praised her, theres at least 10 drivers who say she has no talent. Sorry but a handfull of good results dont make her legit for me.
Not to mention, like Rasputin said, her experience is mostly on ovals which doesnt exactly translate to F1.
Last edited: 14 April 2014

Contributor
As a number 2 driver in it for a season or two I can't see the harm. At least she's a race winner which is a lot more than "the fastest woman in the world" Susie Wolff

They will still need an experienced team leader with excellent testing knowledge. Maybe they could tempt Barrichello out of retirement.

Contributor
Am I the only one who giggles smuterly when Susie Wolff is described as the fastest woman in the world? Toto won't like that.

For the purposes of equality I'll say I giggle the same when a man is described as a world class player.

As for Dancia - there is no question she is light years ahead of Susie Wolff and no question she has a better background than some on the grid. As for being described as dangerous - you show me a driver who has not been called dangerous by at least one of their rivals and I'll show you someone who has never won anything.

The question still is though why would Dancia want to come into F1 to be critisied for and scruiternised as a woman and an American? If it balanced out with a chance to win races then maybe but to go through all.of that to run round at the back? I think Miss Patrick will stay where she is.

So maybe not joining in 2015 and issuing statements like "we're the most technical advance nation in the world" and "a efficency with a typical American flare" just seems like tempting fate to me.

Contributor
I had a quick google for Haas and came across this site: http://www.haas.com/en/

Contributor
Ignore my previous post as I have just worked out the driver line up for Haas F1,

The teams in Nascar have always been orientated around the car numbers. With the new driver number regulations in F1, Haas could use the same numbers on the cars for both types of motorsport. Currently Haas has four cars in the oval series. If Danica Patrick makes the unlikely switch then she can bring her number 10 with her. My predicted line up involves the two Haas Nascars whose numbers are already taken by current F1 drivers, these numbers are 14 & 4.

With that line up they will have two pairs of safe hands and lots of sponsorship cash to help develop the team.

Valued Member
F1Yorkshire - Won't Kobayashi be upset if Patrick swaggers in with number 10?

That could be an absolutely incredible team though - 14 & 4. There could be 2 seconds a lap difference there, and both cars would always finish. In fact, just exactly as Alonso likes it!

To finish 7th 6th or 5th requires averaging those positions for an entire season, that's a lot more than a handful of results.
The drivers that count, those in the top 10 and better recognise her talent and aren't shy in praising her. The drivers that criticise are those who haven't been able to beat her. 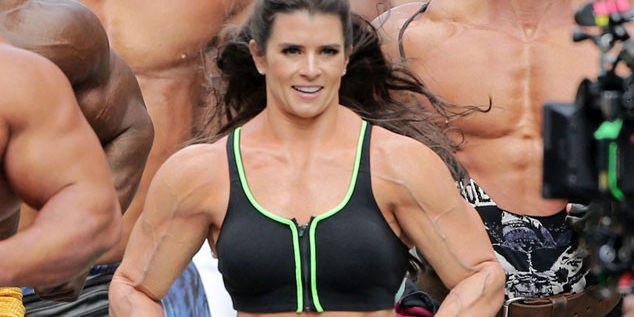 Shogun said:
It certainly seems like Haas wants to come in with an American driver. That would be cool, I just dont know of any American drivers who are ready for F1. God help us if Haas decides to give Danica Patrick a ride in F1. She is currently under contract with him in NASCAR, afterall and she does have open-wheel experience, although most would seriously question her talent level.
Click to expand

Well I hope they do give her a drive, she's a total babe...

Contributor
Bollocks, you've photoshopped the one that I posted above!
M

Contributor
She looks like that and she can drive an open wheeled car faster than most men, she can drive me around anywhere and anytime she wants...

In all seriousness, in her IRL days she was racing wheel to wheel at over 200mph, sometimes you could see the dust come off their wheels when they touched. RESPECT !!!!!!!!
M

Contributor
I've watched her race and have great respect for her ability I especially liked it when she quite regularly beat her male team mates and they would get the right hump about it, that really did make me smile...
M

Contributor
Is Danica Patrick ready for F1? Yes probably, are the massive egos of the male F1 drivers ready to be beaten by a girl? No probably not...

Not ready. No doubt. Sorry.