Lewis Hamilton and what it means to drive for Ferrari

fasinating italian interview with Italian sky f1 that hasnt got the traction i expected. but hamilton admits his that his like every driver dream is to drive for Ferrari 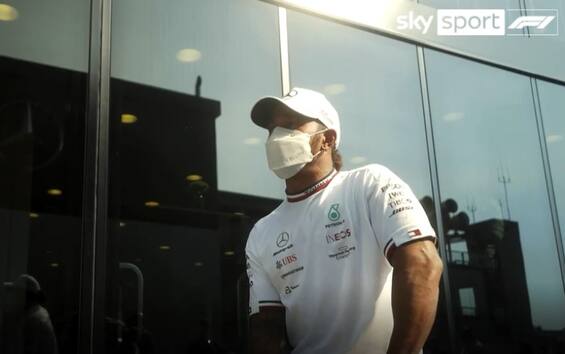 And are you surprised that Ferrari fans want to see you in red?

For many years, when I came to Monza, walking next to the fans ... I could hear them saying "Come to Ferrari!". This warmed my heart, but it's pretty amazing that I've never driven for Ferrari in so many years. Because it is a dream for anyone, a goal to be achieved. It has never really been possible and I will never quite know exactly why. I wish them the best & in my near future I will continue to prevent them from winning the world championship

I've seen photos of their drivers and red is always red. I have a couple of Ferraris at home. I can drive those, but not the Ferrari F1.
Click to expand

Staff Member
Premium Contributor
I think that's no different from that rock star who tells the latest city that they've been the best crowd on the tour.

cider_and_toast said:
I think that's no different from that rock star who tells the latest city that they've been the best crowd on the tour.

but i still Believe it every F1 driver aim is to drive for Ferrari. im not a Ferrari fan but alot Williams in the 90s. there something about Ferrari the history hertiage passion. there must be something in it as hamilton is the only 4+ world champion not to have raced for ferrari

i always felt in F1 besides the obvious aim. there are 3 things you to tick off
win your home race
win at Monaco
win at Monza in a Ferrari
Last edited: 1 October 2021

In the post aero years Monaco win was if you got in the lead you won, mechanicals and team tactics were the only reasons not to.

Premium Contributor
Why do drivers want to drive for a team that never wins ?

Because they hope to be noticed for exceeding the cars capability and be promoted to a car that can win, assuming that team has a teammate that the team allows you to beat. Certain teams have drivers that are specifically be allowed to win irrespective of their lack lustre performances due to being the chosen one

Premium Contributor
But Hamilton is already in a car that can win. So why would he go to Ferrari to prove to Mercedes what they already know ?

If it was closer to Mercedes and Red Bull, then yes, to prove a point, but it isn't so why bother and he won't, quite a few drivers many of them WDC'S haven't and are no less thought of. Going to Ferrari can make or break your reputation, it made Michael Schumacher's and destroyed Vettel's, and nearly destroyed Alonso's but he had a better PR back up to show Ferrari were 2nd rate, but he certainly wasn't and isn't worth 0.6secs a lap

Titch said:
Why do drivers want to drive for a team that never wins ?
Click to expand

Honestly, I think it has a lot more to do with marketability and how much commercial sponsorship, deals and cash they can make.

Ferrari are the best supported team in F1 globally so it is a big draw for drivers to have that level of global appeal. It's not completely about the winning.

Just look at Nigel Mansell. Until 1989 he was a moderatly above average F1 driver who blew a tyre out chasing his best shot at the tilte and had a 13 wins under his belt but not a lot more. After winning on his debut for Ferrari in Brazil he's suddenly "the lion" and the Tifosi love him. Even though it all turned to a shower of shit, he can still dine out on that.

For Hamilton, it would be the best and most bankable driver in the world in the biggest team in the world.

Titch said:
Why do drivers want to drive for a team that never wins ?
Click to expand

for me its the prestige, if you drive for ferrari you just ascend to different level of driver. as i dont think Irvine, Barrichello, Alesi, Berger, Salo, Fisichella. all in a nice way average drivers that wouldnt be as known if they hadnt driven for ferrari

alot like schumacher & vettel. that lure of success of ferrari is too appealing. i always think drivers allways think they can bring back the good times

Premium Contributor
Well I think that Hamilton would be a plonker to go to Ferrari. He might arrive at the team as the best drive, but he would leave as a has been.

Ferrari really is a very good PR exercise, when it started and through the 50's it was just another Italian sportscar manufacturer that went racing Alfa and Maserati were the teams to beat, Ferrari were are the last Italian team left and thus the legend was born, Ferrari was born out of Alfa, Enzo ran the Alfa team and the first F1 Ferrari's were basically Alfa's, there isnothing special about Ferrari except its longevity in F1 and the last Italian survivor, it was soundly trashed in the 70's and 80's by British almost amatuers cobbling together off the shelf engines and engineering ingenuity, the wake up call came in the 60's with the advent of the rear engined Coopers, Ferrari has always been an engine superiority team and relying on bought in expertise for chassis design when the engine department was in the doldrums.
Except F1 could lose 6 cars from the grid, no one really would miss them after a couple of years except possibly the Italians and therefore probably more government support to keep them in the sport, similar to Renault, they have had more down and ups in their history than whores nickers and are at present at knee level.
So not a good time to join Ferrari, the new regulations may well change that if they have been biased towards Ferrari but we won't know that until next year and by the time Lewis may jump he will be past his prime so he probably will never drive for them.
Last edited: 3 October 2021

F1Brits_90 said:
if you drive for ferrari you just ascend to different level of driver.
Click to expand

Salo was only there because Schumacher was out injured.

Irvine was a terrible driver and would of been the most laughable world champions ever.

Irvine and Barrichello were only in the team to play second fiddle to Schumacher.

Driving a Ferrari ruined the promising careers of Albereto, Capelli and Alesi.

Drivers such as Steffen Johanson and Nicola Larini were just plain crap.

Premium Contributor
I know of all the drivers you mentioned F1Brits_90 but not because any of them drove for Ferrari, in fact if the name Eddie Irvine crops up, I see a prat in green.

Salo was only there because Schumacher was out injured.

Irvine was a terrible driver and would of been the most laughable world champions ever.

Irvine and Barrichello were only in the team to play second fiddle to Schumacher.

Driving a Ferrari ruined the promising careers of Albereto, Capelli and Alesi.

Drivers such as Steffen Johanson and Nicola Larini were just plain crap.
Click to expand

i never said they good drivers but you are remembered more if you drive for ferrari. eddie Irvine wouldve been a nobody if he hadnt driven for Ferrari


F1Brits_90 said:
average drivers that wouldnt be as known if they hadnt driven for ferrari
Click to expand

Valued Member
I give you Luca Badoer

Premium Contributor
Bollocks F1Brits_90 . I had heard of Eddie Irvine long before he drove for Ferrari , he was a prat but certainly not a nobody when he drove for Jordan .

The Pits said:
I give you Luca Badoer
Click to expand

Why. What would you like us to do with him ?

Titch said:
Bollocks F1Brits_90 . I had heard of Eddie Irvine long before he drove for Ferrari , he was a prat but certainly not a nobody when he drove for Jordan .
Click to expand