Staff Member
Premium Contributor
After pages and pages of e-mails and direct messages in support of the first edition of Good Things / Bad things, who am I to deny posters another round.

I won't do the poll on this one as I think it was a little bit complicated. I'll leave the top 10 poll to someone else.

So, what to make of the Eric Bristow GP with all of the excitement that went with it?

Lando Norris - A great race from Lando this weekend. Needed to hold it together, and keep it on track on Saturday to land a well deserved front row start but more than made up for it on Sunday with a strong run through the field to an eventual third place finish. The only slight downer was the use of team orders to pass Danny Ric but it's hard to argue that he didn't have the pace to run ahead of him once in clean air.

Lewis Hamilton and Max Verstappen - Clearly the best two drivers on the grid. Verstappen controlled the race from the front and Hamilton kept his head after a couple of errors and came back well. This is set to be a great battle this season even if you don't like one, the other or both drivers.

Driving standards - Let's be honest, this race was part Grand Prix and part demoltion derby. These are supposed to be some of the best drivers in the world. Yes the conditions were tricky but there were more spins than a House DJ.

Teammates letting the side down - For every great run by one driver there was some awful stuff going on from their teammate. Bottas, Sainz, Ricciardo and Vettel all had weekends to absolutely forget.

So, what else would you put on the good things / bad things list?

love the Eric Bristow GP, is that because the weather did a 1 Hundred & Eighty as the race was about to start

Good
- can we check that this is F1, because that 2 entertaining races in a row. dont they know since 2013 what we all supposed to moan about how boring it is. weve got sporting neutrals are interested in the sport

- Agree on Lando, the 1st 2 years i thought he was very good but whereas i thought Russell would be a Hamilton & Norris would be more like a Coulthard or a Button. but now he is really is a star of the future he really could put this on pole & won the race, which is ridiculous

- overall i will say Perez, of course he struggled in the because every lap was a learning experience, but the fact he outqualified vertsappen for the 1st time in 3 years. is huge for red bull & overall they will be pleased

- Bottas was dreadful this weekend, as i say if he going to moan about how he is given a fair chance, then at least walk the walk. because at the moment his mouth is writing cheques, his talent cant cash. despite a much superior car to Red Bull from 2017 - 2020. he won 9 races to Verstappen 10, then only finished 2nd because of verstappen bad luck & unreliability, lewis hamilton is leading the world championship, Bottas was in his own race in 3rd in bahrain & racing a williams on merit in imola

- driving standards are again on thoughts, as jackie stewart said about F1 they wouldnt do this 30 years ago because you could kill someone. its fine margins but for Bottas to jink to right to unsettle him at 200mph, was wrong. but this is not bottas this is a very common occurance. in Formula E & Le Mans 24hrs

- Alpha Tauri for intelligent people had terrible day, why they perserved with full wets for so long i dont know

Norris - he has upped his game

Perez in quali..this will be good for Red Bull and fans for now until Verstappen starts manipulating the team

Mercedes they have come through another race unscathed relatively

Red Bull they could have 1-2 easily

Williams both cars crashed when points were there

Aston Martin - it did not start well with the low rake row then Vettel 's car did not have wheels in time earning a late penalty followeed by retirement. Stroll also picked up a penalty so much for copying Mercedes

Alpha Tauri - not maximising points in a fast car

Bottas - poor in the race and almost passed by Russell in a slower car even Toto is concerned. His reaction afterwards appears to be telling knowing he is under pressure

That's a really good one. Isn't it amazing what happens when drivers don't respect proper track limits on a proper circuit.

cider_and_toast said:
That's a really good one. Isn't it amazing what happens when drivers don't respect proper track limits on a proper circuit.
Click to expand

maybe like they talked about have some rotating races that alternate

Contributor
Or just stop racing on the shit ones.

Premium Contributor
Some good, some bad.

gethinceri said:
Or just stop racing on the shit ones.
Click to expand

problem it almost a sliding scale. the worse they are more they pay

Good thing, has to be racing is so much closer. Two races in a row, close battles,different cars in the mix.
Perhaps a bit early to say it’s sorting the men from the boys but cream does seem to be rising.
Looks like natural team leaders are emerging rather than manufactured ones. Drivers making a difference has to be a good thing.

Very clever to keep the throttle on at the expense of damaging the wing on the barrier.

It ensured his rear wheels were clear of the gravel so he could get back on to the track.

No doubt some will claim that it was dumb luck/stupidity and he had no clue what he was doing.
However, considering his ability and success, I'm going to assume it was skill and judgement.

Brogan - straight after the race he’d said he was trying to do a spin turn on the gravel, which went a bit wrong... then he couldn’t get reverse, which is why he sat in the gravel for so long! - But agree, if he’d stopped, his car would still have been in the gravel several hours later!

Premium Contributor
Surely even the most hardened bigots/racists can no longer put Hamilton’s success down to dumb luck. Like all drivers he’s had the odd brain fart, but his driving talent is outstanding.

I have to admit I was a little bit surprised that there was no penalty for reversing back onto the track, especially as there seem to be penalties for seemingly trivial things these days, but it's explained here. 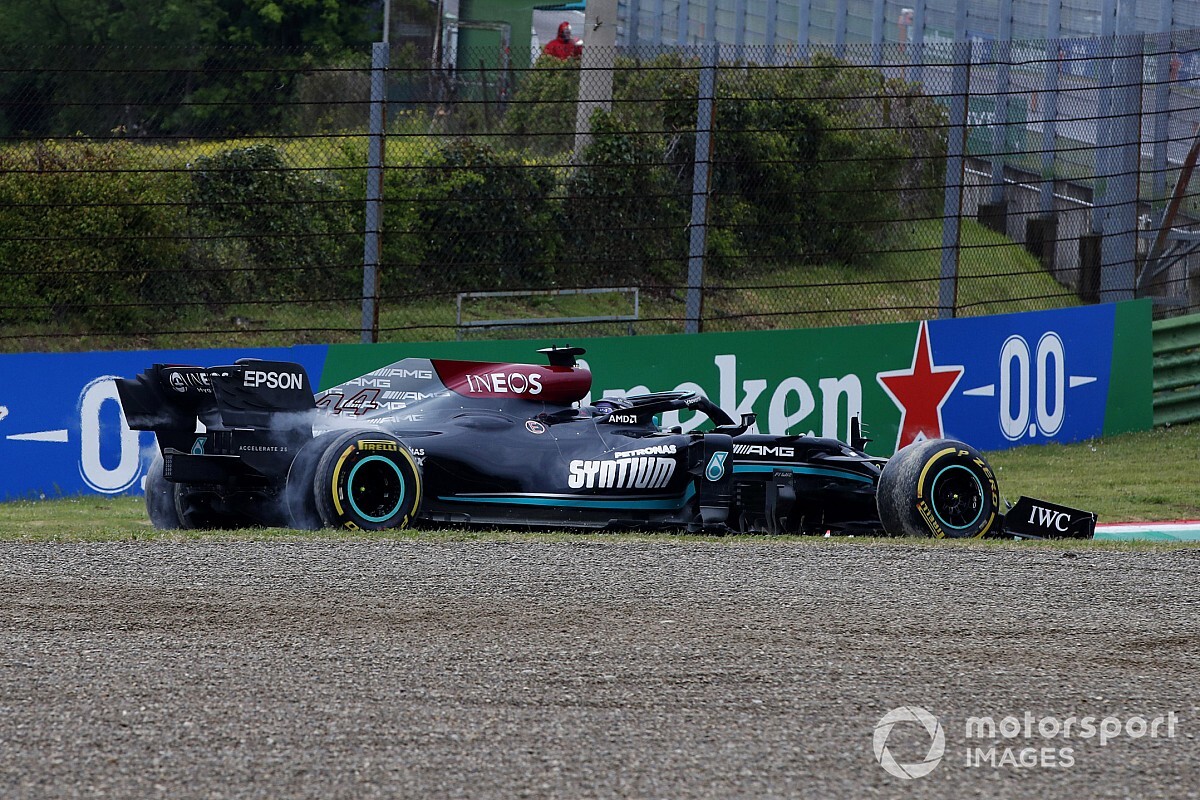 Lewis Hamilton’s recovery drive to finish second at the Formula 1 Emilia Romagna Grand Prix was helped when he managed to reverse back on to the track after his off at Tosa.

Titch i would hope so but then i dont see much difference from lewis hamilton driving since 2018. the idea that lewis didnt have the best car for most of 2018 & 2019. as the ferrari either had a better car or an illegal engine. isnt a new one i hope to majority of F1 fans. as the stats are there espically 2018 wins the world championship with 11 wins & teammate came 5th with 2 podiums

but i think that myth is from the people that just read he's won again. without actually watching

Il_leone said:
Verstappen has come out and said the driver makes a difference and that is based on his experience racing against both Hamilton and Bottas to know which one is the tougher competitor to race against
Click to expand

Isn’t that’s the same Verstappen who’s constantly said that 90 % of the grid could win in a Mercedes.Now that he has the best car he has changed his tune.

bottas is proving the adage is he not that "good" driver can win races he never ssid championships. although I'll admit until Lewis Hamilton dominance i never fully appreciated the talent of Michael Schumacher

at the same time says it all