Staff Member
A list of all fastest laps achieved during the race for all F1 World Championship races held at Silverstone.

Silverstone has been part of the championship since 1950 but until the 1990's the British Grand Prix alternated between Silverstone, Aintree and Brands Hatch.
Circuit changes can be seen here: http://theracingline.net/racingcircuits/racingcircuits/UnitedKingdom/index.html 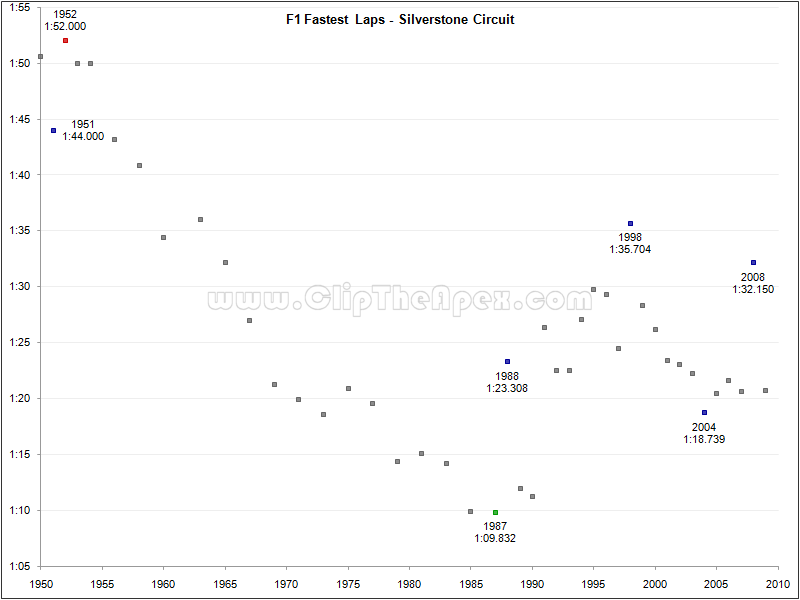 Staff Member
Some interesting stat's on this one.

The fastest lap times in 1953 and 1954 were identical, possibly helped by the fact that they were only recorded to an accuracy of 1 second...

This resulted in the farcical situation in 1954 of 7 drivers sharing 1 point for fastest lap; they each received 0.14 points.

Nigel Mansell achieved the fastest lap 6 years running.
Is that a record?
B

He also set the fastest lap at Brands Hatch in 1986, so did so seven years running at the British
GP.

I don't think anyone else had more than three, but I'm looking at events rather than circuits,
so it might be possible.

6/7 in a row is pretty impressive in the modern era.