As a young man growing up on the south coast Derek Warwick was a bit of a celeb, at least in the Portsmouth Evening News, as he grew up in Four Marks, near Alton and as his racing career progressed the local press showed a very keen interest.

Derek was runner up to Brian Henton in the European F2 Championship in 1980 in a Toleman car, having won the British F3 Championship in 1978. Based on their success in F2 Toleman took the brave decision to move in to F1 and, with money from Italian white goods manufacturer Candy, asked F2 engine maker, Brian Hart, to make them a turbo engine and Pirelli to supply them with tyres. Henton and Warwick went in to F1 with the team and the Toleman TG181 arrived at the San Marino GP in 1981. Both the car and engine were well off the pace and Henton and Warwick only qualified for one Grand Prix each during the season, Henton making to the grid in Italy and Warwick in Las Vegas.

Henton left the team for Tyrrell in 1982 whilst Toleman provided the TG181C, or The Belgrano as it became known (a reference to the Argentine warship sunk in the Falklands war), for Warwick and Teo Fabi. The highlight of the season was Warwick's run at the British Grand Prix at Brands Hatch. Although never formally confirmed it's believed that Toleman sent the car out on half tanks for a glory run and Derek certainly made good use of it, running as high as second and passing many of the front running cars, including Didier Pironi's Ferrari before stopping not long after half distance. The TG183 arrived at the end of the season but both cars were dogged by poor reliability as the arms race for more and more powerful turbo engines proved troublesome for Brian Hart. 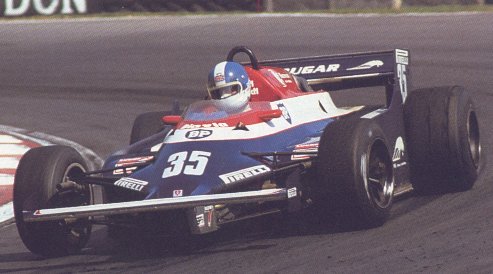 For 1983 the TG183 B debuted. With flat floors for '83 the B spec 183 sported a full width front wing, which had part of the cooling system mounted within it, and a double rear wing to try and recover some of the lost down force. Derek was now partnered by Bruno Giacomelli and between them they managed 10 points (9 for Derek and 1 for Bruno) all collected at the end of the season as the team finally found some reliability. 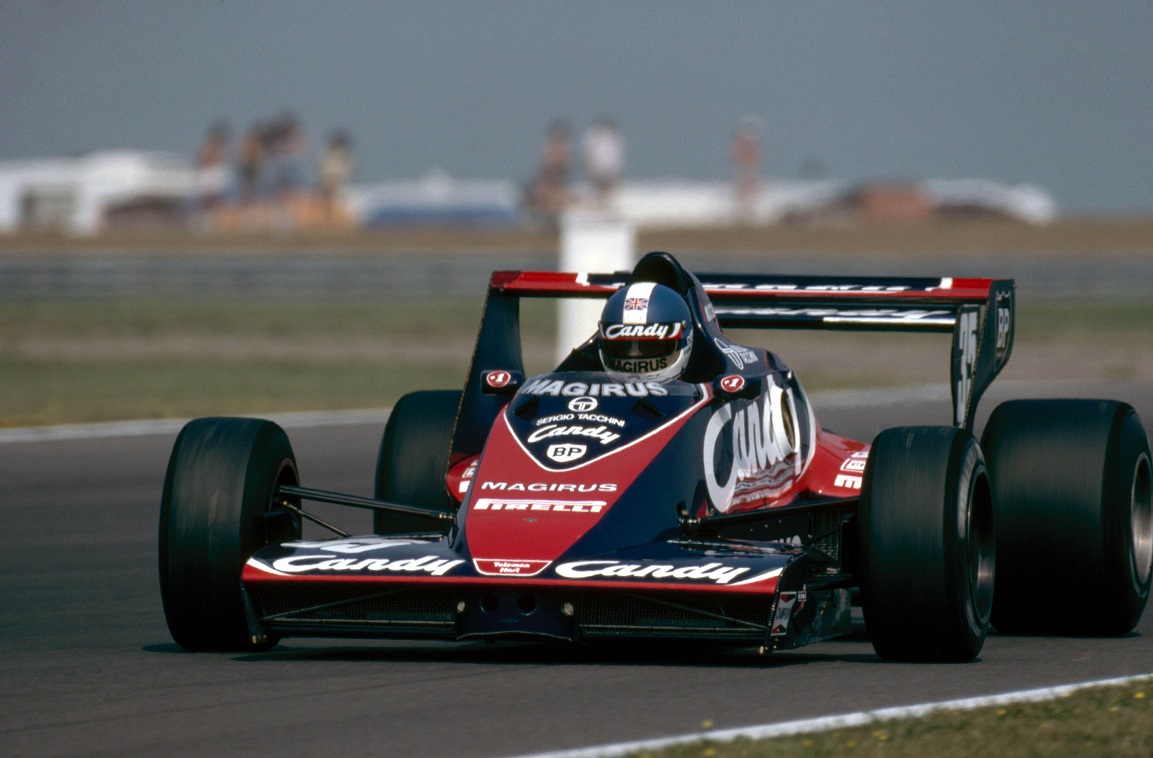 Derek's performances at the end of '83 got him a drive at Renault, alongside Patrick Tambay, for 1984. Having challenged for both the drivers and constructors titles in '83 this should have seen Derek elevated to the circle of Grand Prix winners and at the first race in Brazil he was running a strong second until Niki Lauda side swiped his Renault and broke the suspension. Derek the took podiums in South Africa and Belgium and was 4th in San Marino before the gremlins got in the works. Of the 16 Grands Prix in 1984 Derek finished only five with four of those on the podium.

Derek stuck with Renault for 1985, despite an offer from Williams who ended up with Nigel Mansell who won 2 Grands Prix that year. Derek should have driven for Williams in 1982 when Carlos Reutemann retired and Frank instructed his team to "sign Derek" who promptly went off and gave a contract to ultra journeyman Derek Daly. The Renault team were now in decline and the RE60 couldn't challenge at the front. In fact the factory Renault team were being beaten by engine customers Lotus, Ligier and, at the end of the season, Tyrrell.

Renault pulled the plug on car construction for 1986 preferring just to supply engines. Warwick was hoping to get the second seat at Lotus but Ayrton Senna vetoed this on the grounds that "Lotus could only support one driver challenging for the title". Many suspected Ayrton was a little scared of Warwick at this early stage in his career although Senna didn't shy away from taking on faster drivers later on in his F1 life.

Derek was sat on the sidelines until the tragic death of Elio de Angelis in testing at Paul Ricard. Bernie offered the drive to Derek with one of the reasons being that he was one of the few top drivers not to ring him after de Angelis' death asking for a job. The low line Brabham was not a good car but at least Derek was back in F1 and for 1987 he started the first of three season at Arrows.

In 1988, with Megatron having sorted out the now rebadged BMW unit, Derek consistently scored points. For 1989, with turbo's banned, Arrows used the Cosworth DFR and the A11 wasn't a bad machine. Derek had lost none of his pace and, without problem pit stops and reliability issues could have won in Brazil and Canada. A meager 7 points was all he managed to accumulate through the season so for 1990, 4 years too late, Warwick went to Lotus.

As appeared to be the pattern, Derek joined Lotus as they were on the way down. The 102 was a pretty rotten car and mated to the Lamborghini V12 engine neither Warwick nor team mate Martin Donnelly really stood much of a chance. Derek had a huge accident in Italy at Parabolica and I for one will never forget the sight of him running down the pit lane desperate to get in to the spare car for the restart. At Jerez Donnelly was involved in a huge accident which nearly cost him his life and certainly ended his career. For many this would have put the question in their mind of just how safe the car was but Derek being Derek went back out and was running close to the points before his gearbox broke.

Derek was without a drive for 1991 as Lotus lost their Camel sponsorship. He wouldn't be back in an F1 car until 1993 when he landed a seat at Footwork. Again Derek appeared to not have lost much of his pace, as a win a Le Man in 1992 proved, but the car wasn't up to much and it was a poor swansong for him in F1 with only 4 points to show for his efforts through the season.

With F1 now out of his system Derek still needed the challenge of fast cars and did a few seasons in the BTCC as well as another attempt on Le Mans. Derek only managed one win in the BTCC, in a Vauxhall at Knockhill in 1998. At the end of the season he retired.

Having moved to Jersey in the mid-80's Derek now runs a Honda car dealership there and is occasionally the driver steward at Grand Prix events.
.
The best driver never to win a Grand Prix? He is certainly up there with Chris Amon and Jean-Pierre Jarier in that regard for me. I love to hear Derek talk about F1 and the career he had. Fearless, honest and super quick. Derek deserved more from F1 than the miserly 71 points he accumulated from his 147 starts but sometimes you just need to be in the right place at the right time, just ask Pastor Maldonado.

I'll leave you with this.

FB said:
this should have seen Derek elevated to the circle of Grand Prix winners and at the first race in Brazil he was running a strong second until Niki Lauda side swiped his Renault and broke the suspension.
Click to expand

He actually had that win in his pocket until 10 laps from the end. It was a good 40 laps after the impact with Lauda that his suspension finally let go and by then he was 20 seconds in the lead.

Staff Member
Valued Member
Derek Warwick was always a bit of a hero of mine. If ever there was a driver who spent his entire grand prix career in the wrong car at the wrong time it was Derek.

I believe if I remember correctly he himself confirmed the Toleman low fuel run story was true in an "At lunch with..." article in motorsport. I think it had something to do with Toleman on the brink of losing a major sponsorship deal.

His return to the car after Martin Donnelly's huge crash in Jerez was about as brave as it gets for a sportsman. According to interviews I've read, he said he had to get into the car, he owed it to the team and that if he didn't he would stop racing there and then. At the time, Lotus had no idea what caused the crash. There were severe issues with the 102 flexing in ways that no F1 car should and the design of the car was never really sorted until the 102D model when it ran with active suspension in 92.

Contributor
I have always considered Derek to be the second-best F1 driver to have never won a race, after Chris Amon.

Their records do not do justice to their talents.

Contributor
I liked Derick Warwick. It's a shame we don't see more of him. As he's a Honda man I imagine he will be very keen for the McLarens to do well.

Contributor
Liked Warwick, he always seemed very down to earth. Shame he never had a particularly good car.

Warwick though is an example not making the most of his opportunities,, considered more naturally talented than Mansell and just could not get into the right car

The only other thing I remember reading was when he had just lost his brother Paul who was killed at Oulton Park and he was qualifying for a WMSC race and he was about to pass Schumacher on a qualifying run. Amazingly Schumacher turned his wheel into him and it caused one hell of a commotion because Schumacher appeared to do it deliberately and did not apologise. The senior members of the Mercedes team had to be peacemakers for Schumacher and offer diplomacy to Warwick

Schumacher appeared to do it deliberately and did not apologise. 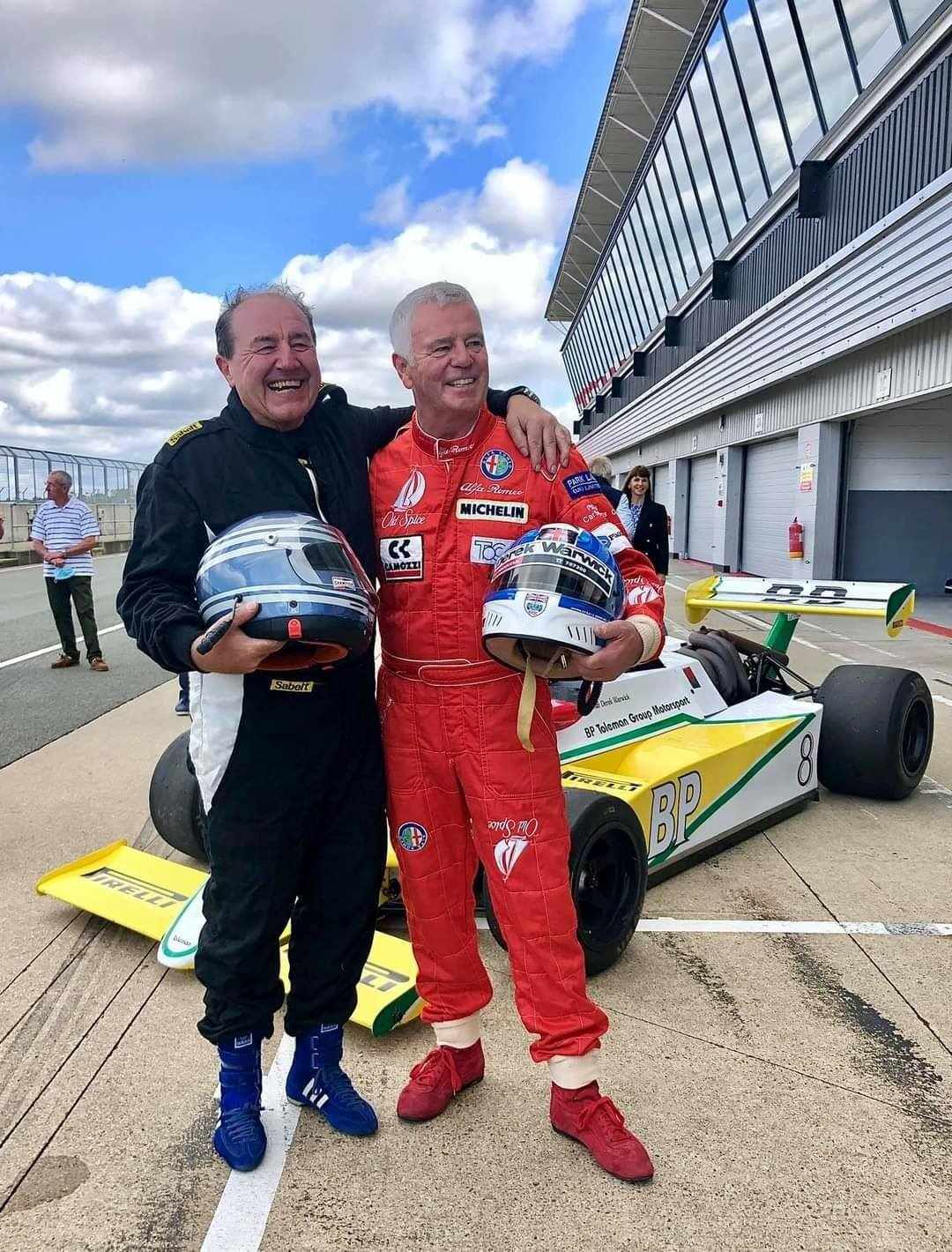