Valued Member
So, MG, under new ownership and nothing resembling the MG of old (or even of Rover days) is returning to motorsport by entering the BTCC this year.

With names lined up such as Jason Plato, Andy Neate, Triple 8 race engineering and sponsors primarily in the form of Tescos Fuels and KX, is this an attempt to regain the glory days of the brand that is ultimately doomed to fail, or have they put a decent team in place with a chance of winning, even if it is just a few decent places in the first season?

Unfortunately, other than the usual press releases right now there is not much info out in the wild to be able to judge. I hope this is a good move, though BTCC does appear to have the formula right to be tempting manufacturers of mid range sports cars back into racing...

Staff Member
Good news for the BTCC after they suffered a few setbacks related to other manufacturers and teams withdrawing.

Glad to see Plato has a drive too.

I wonder how competitive this new car will be though?
I hope Neal doesn't have an easy run to the title again...

Contributor
Great to see them back. Auto Express have a Picture of the new car. Looks good.
http://www.autoexpress.co.uk/news/autoexpressnews/277759/mg_joins_btcc.html 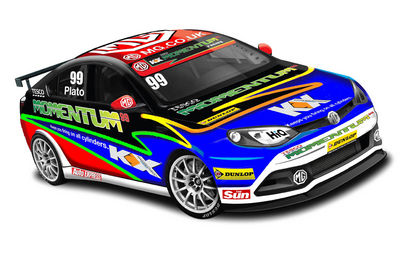 Valued Member
The thing that excites me is the link up with Triple Eight. Some of thei cars in the past have been amazing in comparison with the base model (Tripple 8 Astras, Cavaliers and Vectras to name the ones that most surprised me). If th MG6 is a fairly decent baseline to start from I can see this being one fast car, but if the traditional MG reliability and design have been built into the model I cn see it being an unmitigated disaster

Valued Member
Excellent! I think the very fact Plato has signed up tells you that this is a serious effort.

Unfortunately if the MG is a dominant car, Jason won't face any opposition at all from Neate in the second car.

So what's to become of RML/Chevrolet?
C

Galahad said:
So what's to become of RML/Chevrolet?
Click to expand


Just had a quick look at the Silverline site and there is nothing on there about 2012, but they are still listed as entrants to this years competition so I would assume they are going to be making an announcement about drivers fairly soon (I hope)...

Valued Member
The WTCC programme must be reaching zero diminishing returns now there's no opposition. Still, I suppose that means they don't have to spend anything on development?

Valued Member
I meant to make a post about this ages ago, two teams have confirmed they are leaving BTCC for WTCC: RML/Chevrolet and Team AON/Arena Ford.

Arena refugee Tom Onslow-Cole will be driving for West Surrey in a third entry alongside Rob Collard and Nick Foster. Since Tom Chilton was a financial contributor to the AON programme I assume he will be going with them into the WTCC.

Oh that's terrible news.
Looks like the BTCC is in its final death throes

Valued Member
I don't think it's as bad as all that; you've still got Honda and MG as two works teams, as last year, plus Motorbase, WSR and Pirtek as decent privateer competition. With the move to mostly NGTC cars, some of the other teams might be able to put up more of a challenge too.

If the total lack of fans in the Grandstands and the average at best coverage on Eurosprat at this weekends WTCC meeting at Monza is anything to go by BTCC should have little to worry about. If ITV4 drops the ball somehow and don't do the great job they've been doing covering the past couple of seasons then maybe I'll change my mind. It's where the sponsors decided to spend their money that will determine the outcome, methinks. It will be interesting to see how things look a few races into the season.