Contributor
Welcome to the Tyre Analysis for the 2011 Abu Dhabi Grand Prix. The increasingly complicated spreadsheet (thanks to the tireless work of Sushifiesta and Jez101) judges the tyre wear by looking at the fastest laps of the stint, the fuel level, and the position of other cars around them. After a Benchmark time is created, we can see the seconds away from it, and judge tyre wear by the trend of the line. This is shown on the x axis. As tyres wear the benchmark time becomes harder to achieve. We can see the tyre wear on the graph. The link to the spreadsheet is at the bottom.

Pirelli chose the uninteresting combination of Soft (Yellow) as the Option and Medium (White) as the prime.

Amongst the top eight, only Webber chose not to go for the safe Used Soft, Used Soft, and New Medium. He spent an extra stint on the Soft tyre, switching on to the Medium Tyre on the last lap. 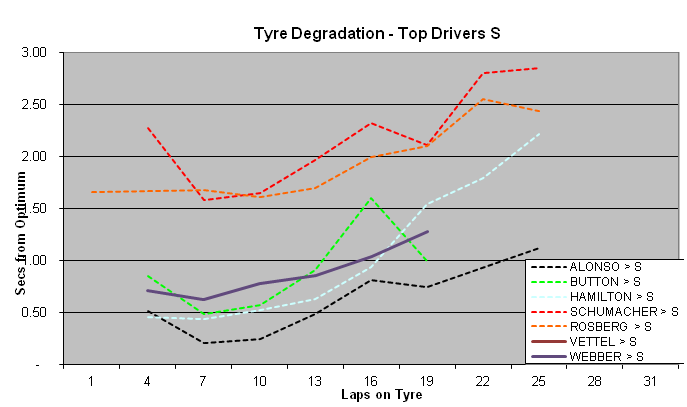 The Soft tyre first I think, that’s what most the drivers spent the majority of their races on. Hamilton shows the most obvious wear, starting to lose tyre tread noticeably after 13 laps – with the wear increasing a degree about 3 laps later. At lap 25, Hamilton is really struggling, and had no choice but to pit, leaving Alonso to try and put in some fast laps and jump him when he left his pit stop. Ultimately fresh Mediums were quicker than 29 lap old Softs , and Hamilton was able to keep his lead and force Ferrari to settle for second. The Soft tyre being the faster choice is not working well, if not for the 2-compound rule, this would have been a one-stopper entirely on what was meant to be the Option tyre. If we ignore the unusual spike at Lap 16, Button’s time are telling a similar tale of events up to where he pitted. It seems that for this race at least Hamilton didn’t suffer with the high tyre wear that has troubled him in the past. Webber has a line of similarly gradient to Alonso and Hamilton, so tyre wear was never a problem for even the driver who is toughest on tyres. Are you listening Pirelli? Even the Mercedes who have been particularly bad at wearing tyres had no such problems. There is a gradual climb, but nothing scary enough to put them off leaving Schumacher out for 29 laps, and Rosberg for 31 laps! What sort of a Soft tyre is this! 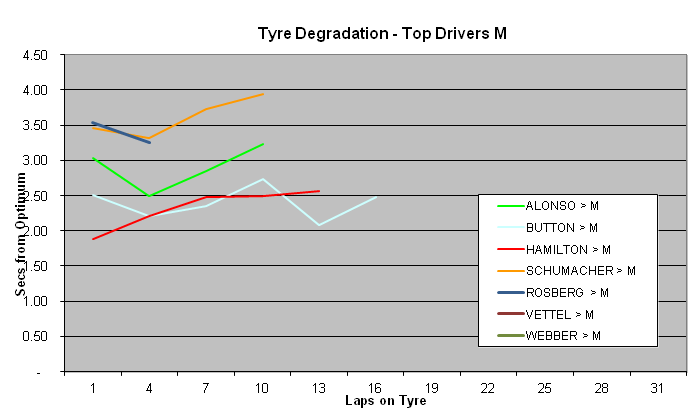 There isn’t very much to work on here, Vettel and Webber did no laps, and only McLaren did enough laps for there to be a possibility of tyre wear, and there clearly isn’t. Button’s time stay close x=2.50, and Hamilton loses only a small amount of time, probably easing off as Ferrari decided against going for the win on the less favoured tyre. The only thing we can learn we already knew, the teams avoid the Prime tyre like the plague, and it really is a waste of space. It is really slow as well, for example Button spent his time between 2.00 and 2.50 seconds away from the optimum time; on the Soft tyre he was between 0.50 and 1.00 seconds away (ignoring the rouge lap). You can see it better on the graph at the bottom, but 1 and a half seconds is just too much. Pirelli even predicted it would be 1.4 seconds slower, but didn’t change their minds, even when it was obviously going to produce the race we ended up with. Di Resta spent 27 laps on New Mediums, and 28 laps on New Softs, and the Soft tyre was faring better even after half a race! Final nail in its coffin I think, but moving on now... 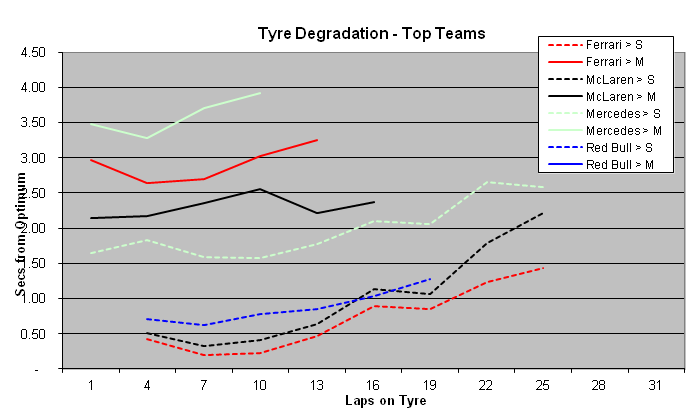 Surprisingly the biggest three teams all have very similar lines of wear on the Soft; a gradual curve that becomes slightly steeper after nineteen laps. Mercedes seem to follow the same sort of pattern, albeit a fair bit slower, they have a lot of work to do over the winter to bridge the gap and become regular challengers for podiums and wins. No team stands out as having good or bad wear, and it all seems very predictable. What happened to the cliff that was so scary earlier on in the season? The Medium tyre (although there is little data) all looks very horizontal. The thing is that only a couple of drivers really had to push very hard in the final stint, and so there appears to be some wear on Mercedes’ and Ferrari’s lines, but it probably is not tyre wear, just drivers making sure that they finish the race. 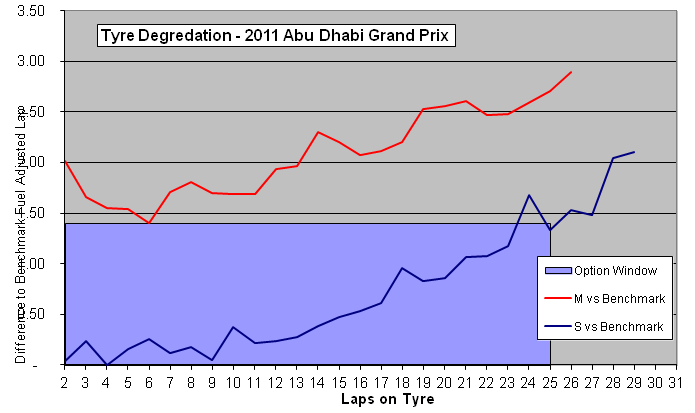 This further backs up my point about the poor tyre selection from Pirelli. The soft tyre not only lasts for a very long time, but it is massively faster, over 1.5 seconds at its peak, and still remaining faster for 25 laps! I have said it umpteen times, but this is one stop territory if not for the two compound rule. The Soft tyre would make an excellent Prime tyre, and in fact there is no real need for the White and Silver tyres, just Soft, Super-Soft, and maybe a ridiculous tyre that melts if you leave it in the Sun too long. I wasn’t so clear on the other graphs, but with some information from the long stints, it is clear that the Medium appears to be wearing, there is definitely a shallow gradient. It may have been a more viable strategy option if it behaved like a better Prime tyre and kept delivering more constant lap times.


At Interlagos we can look forward to the very same tyre combination, Soft and Medium.

For the full spreadsheet look no further...
https://docs.google.com/viewer?a=v&...Zjc3MS00OTMwLWE4NWMtZDRiNTQzOWJkOTY4&hl=en_GB

Valued Member
This is absolutely superb stuff. I really appreciate the effort that you guys put into this.

Contributor
Bin the white tyres I say! They are not offering the slower but more durable choice are they? I really hope that some of these development yellows gets painted white by mistake for Interlagos.

I have added the abu Dhabi trendlines to the earlier version 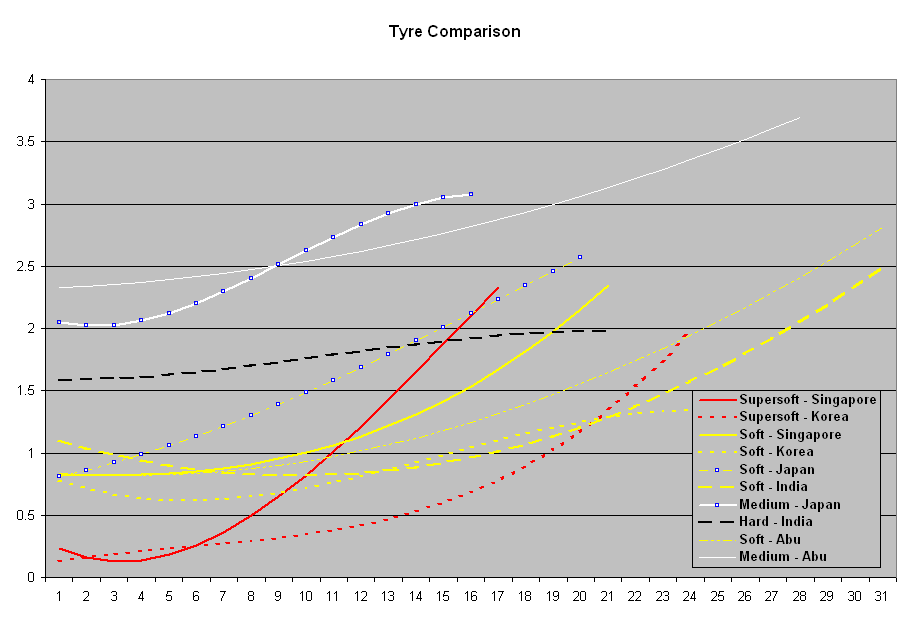 The only races recently where the lines crossed were the Singapore and Korean races where the supersofts were used.

Valued Member
At the risk of repeating myself in these threads, it is horses for courses though. A red-yellow combination would have been fine for Abu Dhabi but may not be for very high degradation circuits such as (off the top of my head) Istanbul or Catalunya.

I completely agree that the current yellows are too good, but a white tyre of some description is likely to be needed on occasion. Even Bridgestone found that.

Contributor
This MS paint concoction is the sort of thing we would love.

Galahad said:
At the risk of repeating myself in these threads, it is horses for courses though. A red-yellow combination would have been fine for Abu Dhabi but may not be for very high degradation circuits such as (off the top of my head) Istanbul or Catalunya.

I completely agree that the current yellows are too good, but a white tyre of some description is likely to be needed on occasion. Even Bridgestone found that.
Click to expand

I agree that they need at least one tyre harder than than the current yellow, but of the races we have charted recently, you could only say that the yellow has behaved like an option tyre once (in Japan).

Valued Member
Indeed - which is another circuit that is reasonably tough on tyres. Perhaps it's more about selection than compounds?

Valued Member
So what you really want (MS Paint again) is this: 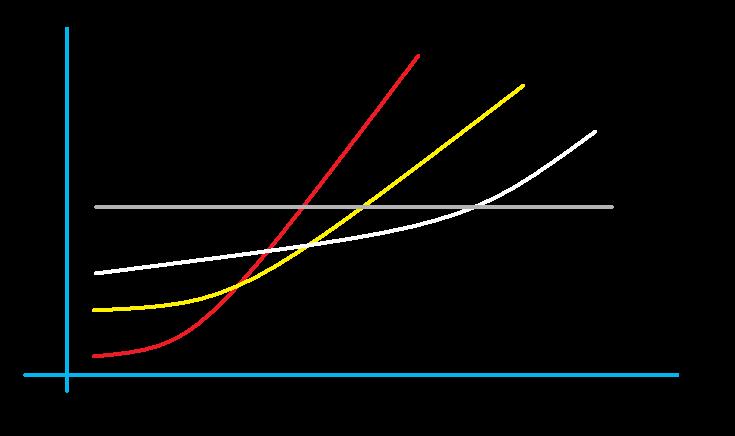 Galahad said:
Indeed - which is another circuit that is reasonably tough on tyres. Perhaps it's more about selection than compounds?
Click to expand

Some of it is for sure, but the white tyre makes it hard to select it as a prime or an option.

jez101 said:
Some of it is for sure, but the white tyre makes it hard to select it as a prime or an option.
Click to expand


What d'you think of the red and white tyres appearing together, jez?

teabagyokel said:
So what you really want (MS Paint again) is this:

Yes, probably with the red crossing heading uphill around lap 6 and crossing the yellow line on lap 10. The yellow and white corssing on lap 15 and the white and silver around 20.

teabagyokel said:
What d'you think of the red and white tyres appearing together, jez?
Click to expand

Instant reaction is that it would be a farce with the whites left on the shelf until the last lap (there must be at least 2s a lap difference). However a more considered opinion would be that it would depend on how well the reds held out.

Contributor
The teams are to race the new soft compound in Brazil. Pirelli will also try a new hard (silver) tyre in practice. The prime for the race will be the old white tyre. In the release they talk about how the soft now could be called medium next year which sounds good. I think we will have a very good idea this time next week whether this new development yellow is the future white, or if the old yellow is going to appear in that guise next year (which it would seem ideally suited to).