At Last! It's here! The race we all look forward to most on the F1 calendar. The thrill-fest that is the Spanish Grand Prix.

Well, maybe we all don't. I think, perhaps, probably very few of us look forward to this race, but Spain is an important market to F1 (?) with two Spanish drivers. And, of course, there is long history of the fans at track side embracing diversity and inclusivity amongst those who line up on the grid. Funny how the object of their "affection" has won 6 of the last 10 races in Spain. However, unless there is some miraculous turn around in the performance of the Mercedes car I suspect Lewis Hamilton will not be adding to that tally this weekend.

Max Verstappen broke his duck at this race in 2016. And, as detailed elsewhere on this Forum, Williams took their last win in 2012. Will that have been their last ever? Williams will be letting Nick de Vries have a run out in FP1, could this be the beginning of the end for Latifi? Red Bull hope not.

The Barcelona circuit doesn't produce great racing partly because the teams spend so much time testing here that they know every inch, inside and out, and setting the cars to their optimum is relatively simple for the top teams. The other problem is that the track layout doesn't lend itself to creating overtaking opportunities.

Rain is unlikely, so we have to pin our hopes on the new formula allowing the cars to get closer to one another. And, of course DRS will allow cars to drift past one another with relative ease. There are two DRS zones, one along the main straight, with the detection just before turn 16, the last corner before the straight. The other will be between turns 9 and 10, with the detection zone half way between turns 8 and 9, on the short straight which runs up to turn 9.

If you're watching on TV here are the UK times.

No silly qualifying sprint in Spain. Although the Ferrari in the hands of le Clerc will be there or there abouts, expect nothing less than a Verstappen win. Clearly this Red Bull is very much the best car on the grid, witness the fact that Sergio Perez has taken two second places and a pole thus far this season.

F1.com asks the question "Where is the best place to watch this race?". My answer "on the sofa, about 10 minutes after it has finished with your finger hovering over the FF button".

that race was quite enjoyable which is rare for a spanish GP in my opinion. the worst race of the season. the new cars were making its possible to overtake into turn 1. feels for Charles he had that race in the bag it would've been comfortable. terrible timing because he lost lead the lead jow going into the monaco GP. his home race but also a circuit he has never seen the chequered flag in, in any formulae

but once he retired, it was, when not if verstappen won. because sainz was out the picture, Russell quick but not that quick. verstappen pace on soft tyres was different league to perez. & mercedes are back a brilliant drive from Russell with some fantastic wheel to wheel defense from Verstappen & Hamilton who wouldve beaten sainz, but for cooling issues despite his bad luck on the 1st lap with a very odd move from magnussen

Riccardio i worry about him because there are no excuses. like last year & i really fear for his career
Last edited: 22 May 2022

Staff Member
Premium Contributor
It's really difficult to try and understand what's going on with Danny Ric at McLaren but he does need to find some speed from somewhere. There are very few options for future race seats.

Having said that, McLaren were poor in the race today. The progress of the last few years has stalled and in some cases gone into reverse.

Staff Member
Why was Magnussen not penalised for driving into Hamilton and ruining his race?

The onboard clearly shows that Hamilton does not deviate from his line.

Brogan said:
Why was Magnussen not penalised for driving into Hamilton and ruining his race?

The onboard clearly shows that Hamilton does not deviate from his line.

But Lewis rammed him, he knew what he was doing (if ramming occurs when you point your car in the opposite direction to the car you’re alongside).

It was very close to the race start so they often take that into account and are more lenient.

Going back to the Perez/Verstappen switcheroo, I'm really not that worried about this... At some point, Perez was either going to need to pit for tyres, or his tyres would have degraded much more than Verstappen, and he would have been overtaken.

Hamberg said:
But Lewis rammed him, he knew what he was doing (if ramming occurs when you point your car in the opposite direction to the car you’re alongside).
Click to expand

how did you get the ramming part. Hamilton was on the apex. i dont see how he done it, its like blame leclerc for brazil 2019? as Brundle said over here, he's already 7th/8th why would he risk ruining his race. Magnussen turned in far too much. although you could say his race was ruined by himself so no penalty was required 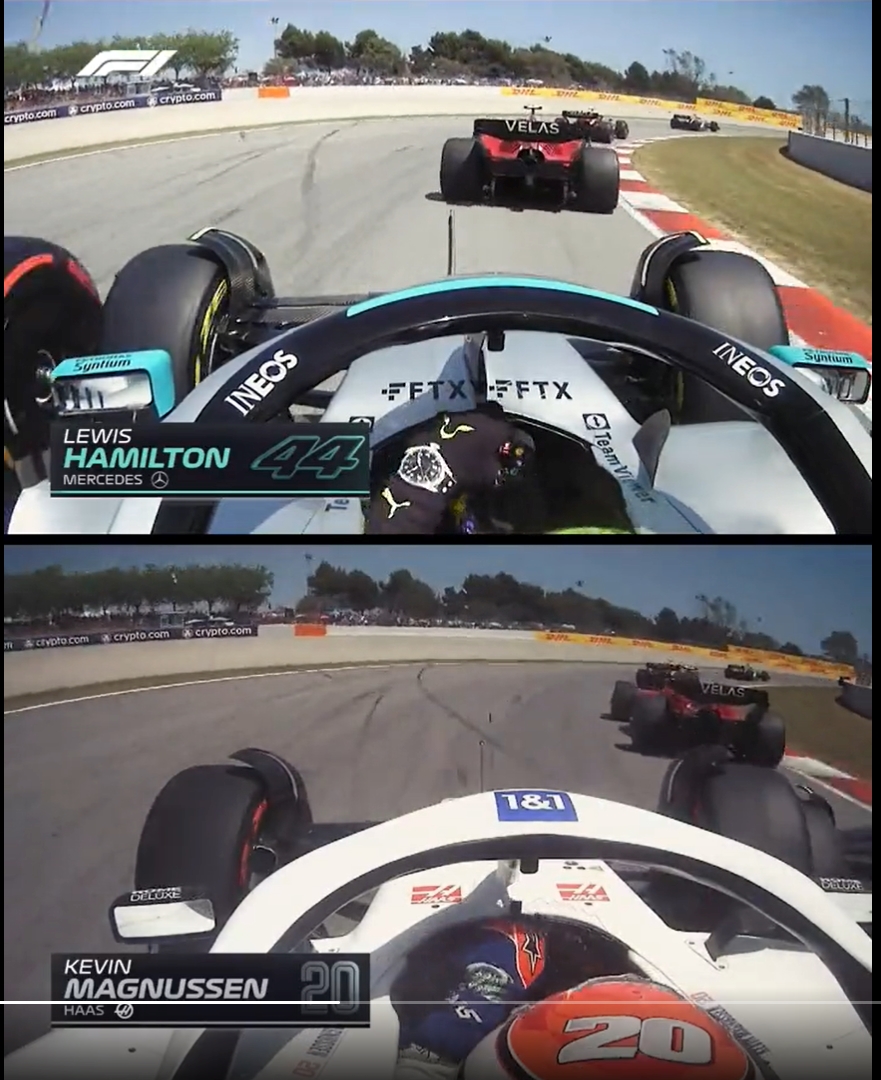 F1Brits_90 - I think that Hamberg is being facetious (given Magnussen's quote over the radio). Of course we can see that Hamilton didn't ram Magnussen...

I don't think Magnussen could be penalised for this - as it was only bad luck that Hamilton's tyre was punctured... Russell had similar contact with Perez at turn 1 (although rear tyre to front tyre), and neither of those drivers were affected.

Valued Member
Best race ever! Recovery in Spain 'better than a win' - Hamilton

Bless him, Lewis really does live in the moment doesn't he.

One topic that hasn't been discussed yet is whether Daniel Ricciardo will be with McLaren for much longer - particularly after races like yesterday. Ricciardo is on a very expensive contract with McLaren, and is reportedly being paid a lot more than his younger team-mate. However, Norris continues to embarrass Ricciardo - and the fact that Lando made it to 8th in Barcelona, whilst fighting Tonsillitis, and Ricciardo limped home in 12th, despite being fully fit, must surely mean that the writing is on the wall for the "most experienced Aussie racer".

The Artist..... said:
One topic that hasn't been discussed yet is whether Daniel Ricciardo will be with McLaren for much longer - particularly after races like yesterday. Ricciardo is on a very expensive contract with McLaren, and is reportedly being paid a lot more than his younger team-mate. However, Norris continues to embarrass Ricciardo - and the fact that Lando made it to 8th in Barcelona, whilst fighting Tonsillitis, and Ricciardo limped home in 12th, despite being fully fit, must surely mean that the writing is on the wall for the "most experienced Aussie racer".
Click to expand

I thought Mclaren would have a car ready for Ricciardo but it ain't working. There seems to be a lot of talk about Colton Herta

I think Van Doorne or De Vries would be lined up 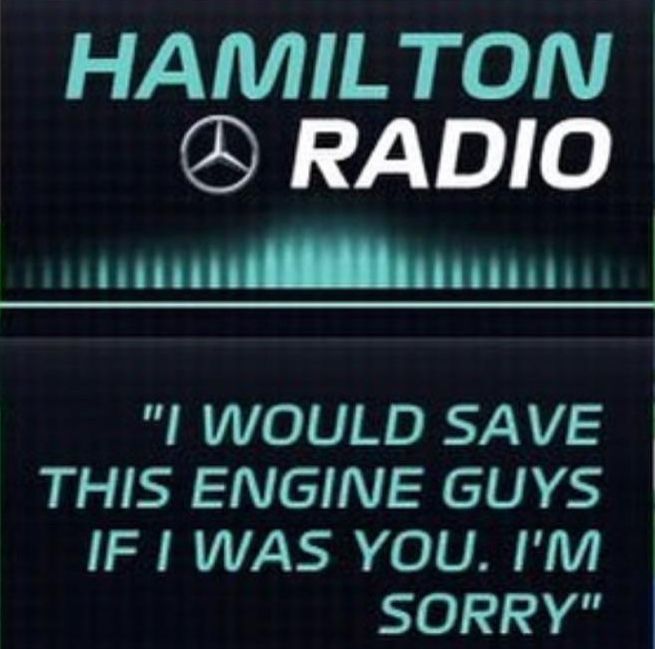 planned to fight for the win?

Chris Tea said:
Anyone else thinking LH radio message about saving the engine meant that he had an aggressive engine mappingView attachment 15597 planned to fight for the win?

It was probably to avoid engine mileage. Look what happened to Charles Leclerc. His ICE is damaged beyond repair. He’ll probably have to take an engine penalty further down the line.

The ones on Russell's car worked better so they have a good idea which direction to go in.

The ones on Russell's car worked better so they have a good idea which direction to go in.
Click to expand

Johnny Carwash said:
A guaranteed snooze fest this weekend. Followed by one next week at Monaco.
Click to expand

Johnny,
Do you think it has anything to do with the mindless and boring TV coverage
from the brainless idiots at Sky Sports?
I do because they have no clue how to cover these races.

I've been moaning about the idiotic directing and senseless camera shots for years but
have no hope of ever seeing a worthwhile telecast of a Formula One race from these morons.
Their telecasts are the biggest waste of air time in history.

We rarely see a static wide shot of the straights with all 20 cars scrambling for position right after the start
or a shot across the esses so we can see the cars move back and forth...not the friggin' camera!

You'll never see a worthwhile race with these stupid jerks running the show,
they have no idea whatsoever of how to follow the action and I doubt if they ever will.

They need a director with an imagination for camera shots instead of the same old ****ing crap.
I'm actually loosing interest in Formula One because of the lousy TV coverage.

I seem to remember that the feed was from F1 TV or whatever Bernie called it. I don't think you can blame Sky, I think the whole world gets the same camera shots.

Back in the day each national broadcaster would film the race for the world. The variations in standards and focus was hilarious at times. Without being nationalistic, the BBC usually was the best.

The problem is that they try to film it like a movie without the luxury of being able to choreograph the show. They forget they're filming a sport.