I saw that bourdais crash & my 1st thoughts were holy

But i was big on my indycar til bt took the rights & ive lost my way but that is quite normal on ovals. Alot like monaco 1 mistake & your in the wall problem at indy is it 230mpg avg lap instead of 100mph

Just seen alonso qualy run. You just cant help but be impressed & why i grown to like the guy last few years. To be 0.7mph of last yrs indy 500 beating the likes of Tony KanaanRyan Hunter-ReayJames Hinchcliffe Helio Castroneves & Graham Rahal stunning enough, nevermind from a guy hadnt been on oval 3 weeks ago

Contributor
Yep, deserved it's own thread. How long before there's an oval F1 race?

Bourdais has, apparently, fractured his pelvis, and had surgery at Methodist hospital.

Not just his pelvis by the sound it, his hip as well. Surprised he was still conscious immediately after the impact, the pain alone wouldhave been been blody agony...

Bourdais was very lucky but as i saying that was bad crash but i almost become immune as respectfully ive seen worse at indy conway 2010 or 12?? & hinchcliffe 2015

BT confused greatly because they are almost the opposite to every other tv channel. As BT want to avoid as many viewers as they can, as the champions league was weird. You'd think they put a british team or major forgein tie, for viewers & ad revenue. But instead they deliberatly irrate people by putting a game 99% dont care with valencia v Rapid Vienna. Same with Indy 500 you would thought they would see dollar signs & either put it on showcase or put it on few pound ppv & cash in. But instead they are put it exclusively on a minor bt channel espn. Only BT could look a gift horse in the mouth & think, nah your ok

Contributor
F1Brits_90 That was the Europa League not the Champions League, and on a Thursday night when there's no other football on anyway. Coverage of the Indy 500 could be better but at least it's on, right?

Contributor
Chilton is 80/1. He won't start in the top 9 but won't be far off, and we know how good he is at finishing races. At 1/4 odds for the first 4 places I'll bung a fiver on him. Oddly enough my father used to teach him English when was a schoolboy in Sussex. Alonso at 8/1 does not represent value. However apart from last night's qualifying I know nothing about the Indy 500 so take this all with a large pinch of salt.

Don't know that yet. He could start anywhere between 10th and 33rd. Yesterday's lap times aren't taken into account in deciding final grid positions except i separating the fastest nine from the rest.

Don't know that yet. He could start anywhere between 10th and 33rd. Yesterday's lap times aren't taken into account in deciding final grid positions except i separating the fastest nine from the rest.
Click to expand

True we don't know yet, but I got the impression from the commentary yesterday that his team missed a trick with the set-up and he could have gone faster. He wasn't far off the fast 9 as it was, so I'm guessing he won't be far off today.

Yeah but that was the case for several other drivers yesterday. Track conditions were very unpredictable yesterday, especially because of the downpour that delayed qualifying by several hours. The track would have been completely green and with the unpredictable track temperatures and wind no-one was quite sure what levels of downforce to adopt. Also those drivers who were among the latest to come on probably had a bit of an advantage compared to the early runners. Scott Dixon was my star of qualifying yesterday, turning in such a quick four laps despite being among the earliest runners at a time when the track would have been at its greenest.

Anyway it none of which is terribly important come race day. You can win from the back at Indy.
Last edited: 21 May 2017

Valued Member
Is ESPN not BT's channel specifically for American sport? Thus the most obvious place to expect the Indianapolis 500 to surface!

vintly said:
F1Brits_90 That was the Europa League not the Champions League, and on a Thursday night when there's no other football on anyway. Coverage of the Indy 500 could be better but at least it's on, right?
Click to expand

Yeah it is on. But you think of the viewers they could get & they seemingly dont want. Ill have to stream it anyway as dont have Bt

Someone up there's got a strange sense of humour. There's a bunch of mechanics down that pit-lane who are facing a race against time to replace a driver's engine in time for quali after a potentially terminal problem declared itself During the last practice session.

DO I REALLY NEED TO TELL YOU WHOSE ENGINE I'M TALKING ABOUT?

Alonso probally glad its just the once, he used to it every session 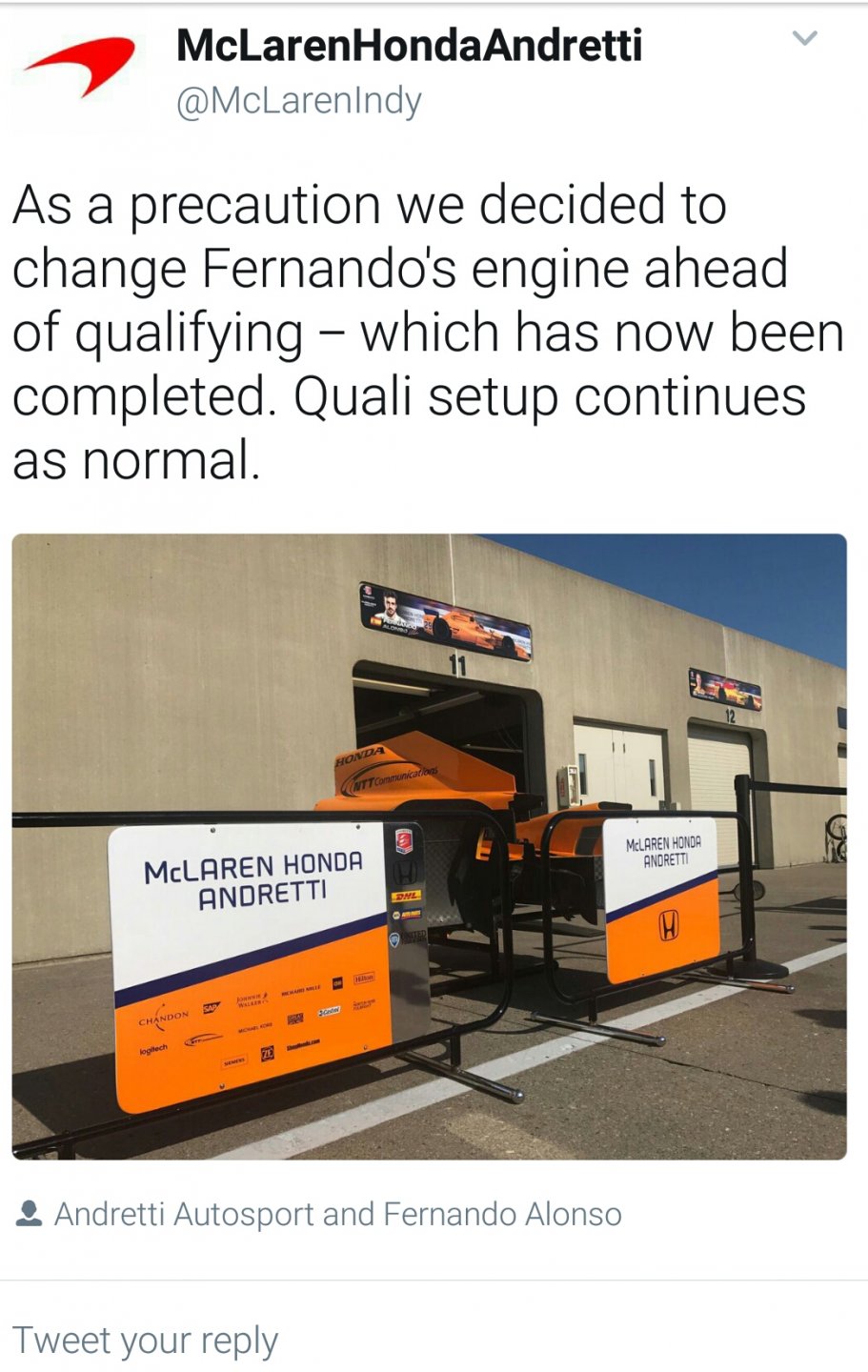 Well track conditions are completely different today. It's all looking a bit disappointing for Penske pace-wise. Castroneves won't be too ecstatic.

Poll Azerbaijan GP Out of 10
2