Supporter
As many of you will know, Europe has dominated the Cup in recent decades, and many of the Euro players' finest moments have come in this competition. But we start anew on Friday and it should be pretty good stuff.

McIlroy is obviously the top dog on the European team, playing his usual solid golf to win in a Playoff last weekend to steal the Fedex Cup from Dustin Johnson. Your Masters winner, Mr. Willett appears to have peaked early this year. Stenson was on fire this summer but he tweaked his back a bit and hasn't really done much since Rio. Haven't heard much from Chris Wood lately either, I think he had a minor injury too. Sergio is always a force to be reckoned with at this event and I'm sure he'll be paired with his fellow Spaniard who had an outstanding year. Rosey and Westwood are right there with McIlroy as team leaders and they are grizzled veterans. Don't know too much about young Fitzy. Kaymer raises his game in big moments and big Thomas Pieters has had some very good finishes of late which secured his status as a Captain's pick.

DJ is playing the best golf of his life but is still prone to poor rounds once in a while. Spieth was bound to regress a bit from the highs of last year but he's still playing well and is one mighty competitor. Who know's what we'll get from Mickelson. Patrick Reed is a fiery fellow and one you want on your side in battle, and not a bad golfer either. Jim Walker had a miracle week at the PGA and has been pretty awful this season really. Koepka has been a little hobbled lately. Snedeker is a goof-ball. Zach Johnson is usually good in pressure spots. JB is a bit of an enigma but when he's on he's hard to beat. Rickie is up and down but he can get it going too. Kuchar is solid as a rock and Ryan Moore is hot right now, being drafted into the team just this week.


Having been beaten so badly so many times since 99 it's pretty much impossible for American fans to feel confident. It is a benefit to have the event on home soil so we can take comfort in that. But I can only wait and see how things play out so I offer no bold predictions.

I see Danny Willett's brother (of all people) has fired the first shot in a rather incendiary, possibly tongue-in-cheek article for NationalClubGolfer. There were some amusing lines, but I'm not sure the patrons at Hazeltine will find it so hilarious.

Who else will be watching the lads tee it up on Friday?

Staff Member
Premium Contributor
The Ryder Cup is apparently the one time it's acceptable for the vast majority of Brits to feel proud to be European.

I'll be watching with interest.

I'll standby to look foolish by the end of the weekend but I think Davis Love will have a huge point to prove after Medina and with home advantage and on balance, the stronger squad, I'm predicting a US win by 1 or 2 points.

Supporter
Davis already gave the Euro squad some bulletin board fodder when proclaiming his squad "maybe the best ever assembled", which is pretty asinine.

Phil Mickelson needs to put his money where his mouth is after berating Tom Watson because of the 2014 beatdown.

Valued Member
I did have a chuckle at Danny Willet's brother's comments....

Maybe we should explain that, that's the point

I'm betting on a European win

Staff Member
Premium Contributor
Willet was apparently all over the place in practice yesterday and what with his brothers penmanship the talk of the town it has contributed to him sitting out this first morning.

They pointed out on the radio that this may have been a mistake because the afternoon crowds have had time to fuel up on beer and may be far more vocal.

cider_and_toast said:
the afternoon crowds have had time to fuel up on beer and may be far more vocal.
Click to expand

You mean the pudgy, basement-dwelling, irritants, stuffed on cookie dough and pissy beer, pausing between mouthfuls of hotdog so they can scream ‘Baba booey’ until their jelly faces turn red? 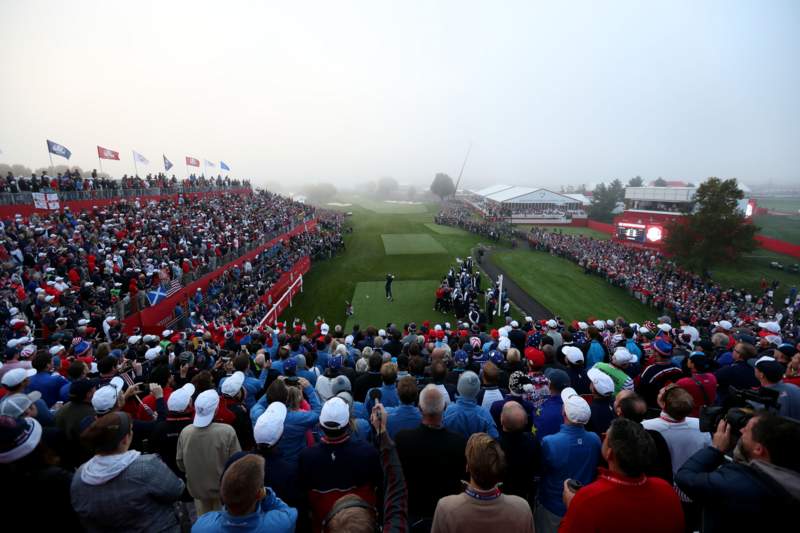 Supporter
Rose and Stenson really struggled to get anything going in the first match out. Patrick Reed pretty much carried Spieth to a 3&2 victory. Dustin Johnson and Matty Kuchar just dusted off Westwood and Pieters as well.

Dream start for the USA

Staff Member
Premium Contributor
The general feeling over here was that it was likely to be 1-1 or 1 1/2 - 1/2 after the first two pairs so, as you said, a dream start for the US.

Supporter
Sullivan just dunked one in the water, and the US is now in position to sweep the morning session.

Valued Member
My apologies to our American members but this did make me smile.

Contributor
I miss golf, and radio 2.

A great event and quite different from any other tournament.
Europe have a very heavy weight on their shoulders as holders for such a time and I think none of the team are firing well in the circuit when they're playing "just" for themselves. So, I think Europe will lose it, AND before the singles get to the 9th.

Supporter
Well that was an awesome event!

Truly some of the best golf you'll ever see. The front 9 of the Reed-McIlroy match yesterday was simply unbelievable. And the back 9 of Mickelson-Garcia was fantastic too.

Thomas Pieters is going to be a force to be reckoned with. Rough one for a quartet of Englishmen who couldn't muster anything, with Willett, Westwood, Sullivan, and Fitzpatrick going a combined 0-10.

Staff Member
Premium Contributor
A bit more of a spanking than my 1 or 2 point loss prediction but after the 4-0 loss on the first morning it was inevitable that the US were going to take the cup. A well deserved victory.

Europe's team is in transition and I would bet on a good 4 or 5 of those players not making the cut in two years time.

Congrats to US. Were better side for most of the weekend & If spirit of seve helped europe in medina. Then spirit of Arnold helped Americans Not to detract from USAs achievement. But it was at home. Havent won a away since 1993 But i would say in hindsight
Going 4-0 down for 1st time in ryder cup history with European involvement. Was too big a mountain to climb as we never lead at any point
Lee Westwood had a bad weekend easy miss putt saturday night would have Europe 8.5 7.5 going into singles not 9.5 6.5
Banker gamble of McIlroy going 1st backfired as he lost

F1Brits_90 said:
Lee Westwood had a bad weekend easy miss putt saturday night would have Europe 8.5 7.5 going into singles not 9.5 6.5
Click to expand

No doubt that was a huge half point that would have given the Euro's a little more momentum. I had already given it to Lee and left the room. Upon return I saw the 9.5-6.5 instead of the 9-7 I assumed it was going to be and pretty much knew we could hold a 3 point lead at that point.