Contributor
I have just had my first VR experience on a low end Samsung S6 VR headset in a static architectural model. Despite these limitations it was mind blowing. Now I am browsing to see what is coming out for the PS4 VR headset released later this year, which is meant to be much better quality. Now very excited about it. 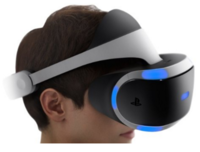 Car has been a growing interest of mine. I initially poo-pooed it as the latest gimmick but this time it looks like they could be doing it properly.

Oculus is going to be first out of the gate next month, releasing at $600 (not sure what the pricing is in other territories). It's really the mid range in terms of VR. It ships with the headset and an Xbox One controller. The Oculus Touch (motion sensitive controllers) release later in the year at an additional cost. The company says you can be VR ready for $1500 when you factor in the computer you need to run it.

The HTC Vive (developed in conjunction with Valve) is the top range VR option. It is being released in April for $800 packaged in with the wands (motion sensitive controllers) you will need. This device has a built in camera which fades in an image of the outside world if you get to close to something. This also offers up the opportunity for augmented reality (AR) games.

PlayStation VR does not have an official price or launch date. It was believed to be coming out in June but it just got pushed to autumn. It is speculated to be the cheapest of the options and also the lowest tier of VR. This will probably be targeted at the mass market and will be many people first experience with VR. As a PS4 owner it is also where I will probably make the jump into VR.

I want to see what developers do with the technology. Can they make it work in ways that the Kinect never could.

One big question I have for VR; can I use a VR headset and not look like a complete prick?

Contributor
I work in an architects office and we are thinking about getting the Samsung phone VR headset for letting out clients have a look around their proposed new house. Its the next level up from 3D walk throughs, total immersion in a virtual building. I'm amazed by the technology. My first computer was ZX Spectrum for gods sake.

Greenlantern101 said:
I wonder where we will be in another 30 years.
Click to expand

Trying to resist the urge to make McLaren joke