The most technically challenging circuit

i was wondering, what were the parameters that decide "how technically challenging a track is...?" Pls share your insights on this...

Contributor
Those with the most inputs by the driver I guess............combined I suppose with G (in all directions).

Is there really a scientific way of seeing how 'techincal' a track is? I don't think there is. Has gethinceri said Driver feedback, what they say in the press and whatnot. Also its a lot do to with how many mistakes drivers make, variation on a drivers laps times during a stint.

"how technically challenging a track is...?" Also i note the cafeul wording, does that mean just how easy/hard to drive a track is? or lets say Monaco compared to moza. If its the latter then you can be more scientific about it. Then its todo with how much time is spent on the throttle, Speed of coners, how bumpy a track is. Time it takes on the exit of a corner to get on full throttle, how much braking needed to enter a corner.

Also with the latter. Monaco, Spa and Monza are 3 very diffent beasts. but all require diffent skill sets from the car and driver. just because Monza is mostly straights, Or Spa has fast coners doesn't mean it is necessarily less of a techinal challenge. Its just that they are 3 diffent types of techinque need to drive it.

Contributor
I would probably opt for the Hungaroring as the most technically challenging track.Its very underused and its usually very hot and dusty.
Many drivers complain about it being very demanding and also due to the fact it is one of the slowest tracks on the current calender the driver have problems with setting the car up correctly and keeping tyre temperatures in the best operating zone.

Contributor
To me, "technically challenging" means a very slight error can have dire consequences (ie: retirement). This automatically eliminates all Tilke tracks from such a description. It means that Monaco is at or near the top of the list due to the confined nature of the circuit.

Valued Member
Singapore is a technically challenging track as well as it in itself is a confined track but with a mix of corners. (Shame none of them are that good for overtaking)

siffert_fan said:
To me, "technically challenging" means a very slight error can have dire consequences (ie: retirement). This automatically eliminates all Tilke tracks from such a description. It means that Monaco is at or near the top of the list due to the confined nature of the circuit.
Click to expand

Couldn't that be classed as dangerous, but could danger be a sub part of Technical?

I'd see Technical challenging circuit as the track the drivers find the most difficult to drive. If there are 2 of equal stature then the one that scientifically pushed their ability the most, e.g. G forces: 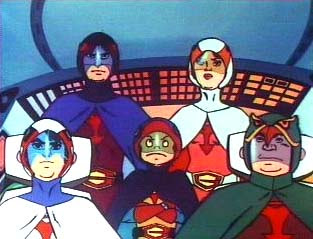 thank you guys for your posts.

Let me reintroduce myself,
I am an architecture student from India. i am doing my thesis project on designing a facility for hosting F1 races. As a part of it i also have to design a race track (though it has very little to do with architecture).I am having a hard time finding data on the subject.
I did some research on the internet and drew some conclusions. I learned the number of overtaking moves pulled off in a race has a direct relationship with its popularity(rating).On that grounds i tried to learn what are the overtaking moves popular in F1, and design the track where there was lot of scope for overtaking.
Now i wanted to take it ahead by studying about the "impact a circuit has on the cars" and the relationship between the number of retirements and popularity.

"Then its todo with how much time is spent on the throttle, Speed of coners, how bumpy a track is. Time it takes on the exit of a corner to get on full throttle, how much braking needed to enter a corner." Andrea_Moda_Rules Pole Sitter


These were the parameters i wanted to look into and how they test the performance of cars.It would have been great if we could have more discussions on this. As it should be obvious by now i am a newbie to motor sports and am interested in learning, pls help me out.

P.S. i am uploading my analysis and study. Pls go through it and let me know what you think. 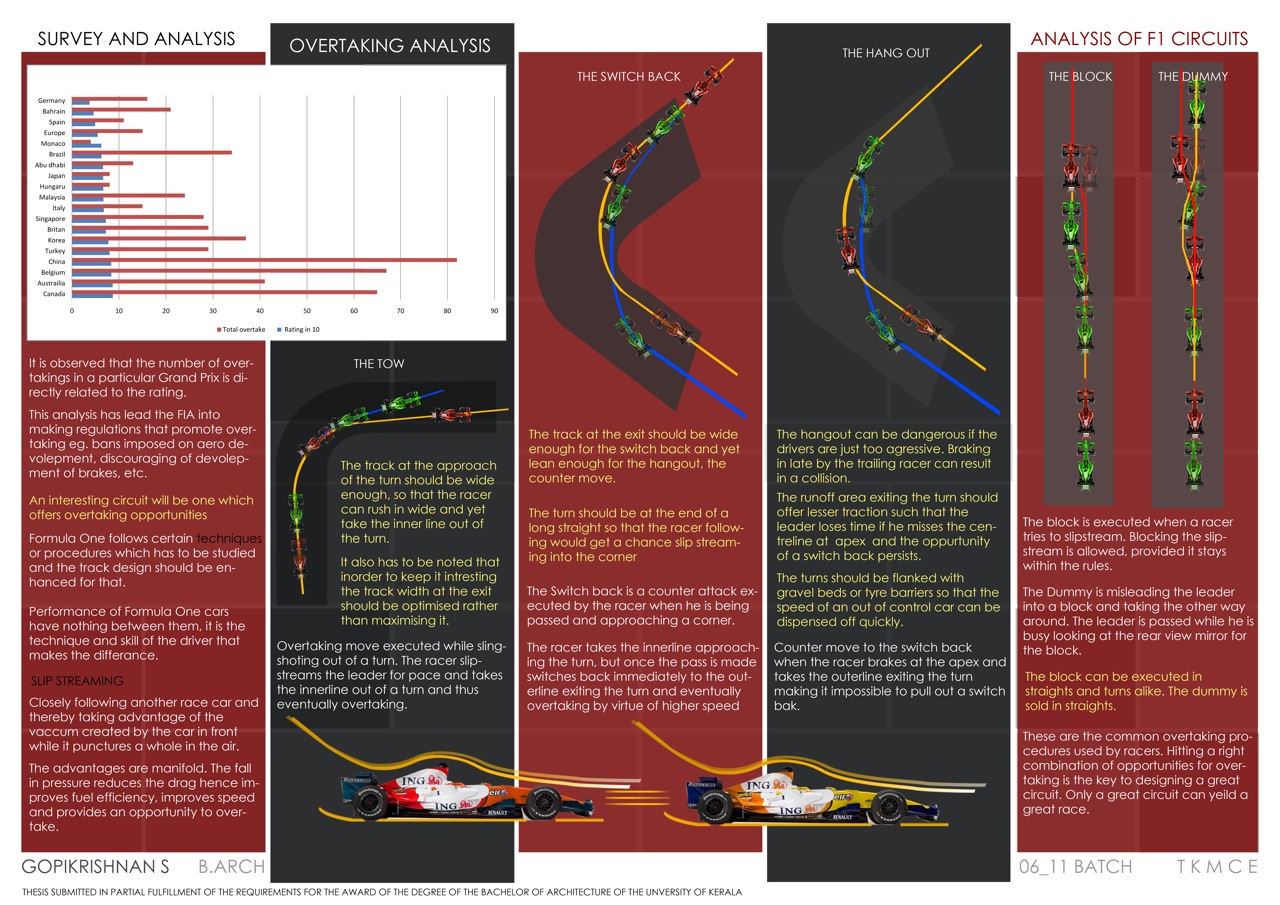 Staff Member
I would say any combination of corners which changes the balance of the car, especially if there is a change of elevation and/or adverse camber.

Braking and accelerating under those conditions will be far more difficult than any other sequence of manoeuvres.

The most technically challenging circuit has to be one where set up of the car is extremely difficult with a massive variety of corner shapes, kerb, straights, gradients, bumps and other bits (weather etc.)

Most tracks on the calender, even the Tilke ones have a few areas where the set up is all important but no one track of this era can be described as a real "challenge". Monaco and Silverstone are the closest to it.

Valued Member
The old Hockenheim layout must have proven tricky for the drivers - low downforce for the fast blasts out into the forest and back and then grip needed for the twisty stadium section. Looking at the way cars used to be set up though (low wing angles) they used to compromise the stadium for ultimate speed in the forest.

To answer the OP's query, I think a technically challenging circuit in the way drivers mean the phrase involves sections of the track where the ideal racing line isn't an exact science, where drivers can find a wider-than-average range of lines through complex series of corners where braking late might not actually help you come out of a corner as quickly and working the best compromises in order to go through a section in the quickest possible time. Whatever puts the onus on the driver to approach corners in the most efficient way possible.

A 90 decree right angle corner for example isn't seen as technically challenging, because all you hae to do it brake as late as possible and put the power on as early as possible on the exit.

Whereas Suzuka for example presents series of corners where the demands are far more complex to get it right.

Valued Member
I think Incubus' challenging circuits and circuits where overtaking is most probable are distinct. Suzuka, for example, is one of the most technical circuits and one of the least likely to produce much overtaking Kobayashi notwithstanding.

Valued Member
Indeed so Incubus - remember the problems drivers had when they arrived at the new circuit in Turkey for the first time and had to work out how to drive through turn 8. Most unusual to find a corner which has as many apexes that a driver must hit or get thrown off the track. The Parabolica at Monza is another example where the driver must adjust road position through the corner to get the best speed. Not sure if, other than Turkey, any Tilke circuits have multiple apex or a parabolical corners.

FB said:
Not sure if, other than Turkey, any Tilke circuits have multiple apex or a parabolical corners.
Click to expand

Austin has a section which is very similar to Turkey, whether it has the same challenge or not we won't know until it is built.

) is that the amount of overtakes in Belgium, China and Australia is boosted by the fact that the races were wet.

In addition, the most important thing imho on overtaking is the corner before the "opportunity". If the drivers can get close to the car in front exiting a corner it becomes possible to utilise the techniques you so diligently note.

thank you teabagyokel
itried looking for any material to read on found little.... pls suggest if you know any

I think often the parts of a track where the driver can make the most difference are those 2nd gear tricky corners where the aerodynamics can't be at their optimum. This should mean Monaco except that track is unique in it's natural flow.

Valued Member
Is it, I wonder, the circuit where there is the biggest discrepancy between team-mates' lap times? In the old days, it was the Nurburgring Nordschleife that separated the men from the boys. Is it Monaco now? At such circuits, the driver is a bigger part of the overall performance package, whereas at others (I would suggest Catalunya) the driver is very restricted by the limitations of his machinery in terms of pure downforce, power, tyre grip etc.