The cars that didn't change the shape of F1

Valued Member
For every exceptional design there have been so many turkeys so let's start with the Lotus 80. For all Colin Chapman's genius this just went too far. Perhaps with today's wind tunnels and CFD systems a car like this might just work but back then, armed with a slide rule, a set square and a desk fan, poor old Colin just couldn't make this aerodynamically complicated car anything other than an also ran.

Although maybe it was the move away from the JPS gold & black that was the problem...

Perhaps worth including some of the efforts which were succesful but outlawed by the FIA?

Staff Member
Premium Contributor
I would like to put forward the most rubbish car ever to atempt to qualify for a Formula one race. Even the truly rubbish Andrea Moda managed to start a race where as this car couldn't make it out of pre-qualifying in 14 atempts before the team folded.

The car design was already a year old and the original owners had given up on it before it was purchased by the Vita family from Modena in Italy in 1990. (Life is the english version of Vita). The new team had a radical engine design that they thought would be ideal for a Formula one car. Instead of the standard V configaration this engine was a W configeration which in theory made it more compact without a loss of power. According to stats however, the engine produced 450Bhp while the front runners producing between 6 or 700Bhp. So bad was this car that it was normally over 10 seconds off the pace. So bad was the engine that the team eventually binned it and replaced it with a Judd CV V8.

This car did change the face of F1, It changed it from a frown to hilarious laughter !!

Valued Member
With Prodrive once again teetering on the brink of an F1 entry, can I offer Aston Martin's only Formula One car: the DBR4.

This was a deeply conventional car, part of a programme that had begun in 1957 but suffered badly from delays as the company concentrated on their top priority, sportscars and Le Mans in particular. Once the 24 Hours had been won in 1959, Formula One moved to the top of the list, and the car made its debut in the Dutch GP of that year.

Unfortunately, times had moved on, and the Aston was overweight, chunky and aerodynamically poor. Worst of all, it still had its engine in front of the driver - Cooper had signalled the rear-engined revolution eighteen months previously but apparently nobody at Aston Martin got the message. Consequently the car was obsolete before it even turned a wheel in a race, and after a short life in competition (the highlights being two reliability-assisted sixth places) the cars were quietly wheeled out of the spotlight.

Staff Member
Premium Contributor
Now I've never seen the Aston car before GM but do you reckon that could be the first time an F1 car has used a forced air intake? I presume that's what it is on the front left side of the car?? I've never seen anything like that on any other car of the same era.

In the late 60's 4WD seemed as if it was the future of Formula One a few teams had raced them and a few more more was considering it.

) had decided to try to there hand at actually making an F1 car, It looked radical compared to other cars in the late 60's and ultimately did not change the shape of F1 because it never got to race as it was deemed not yo be competitive enough to race. 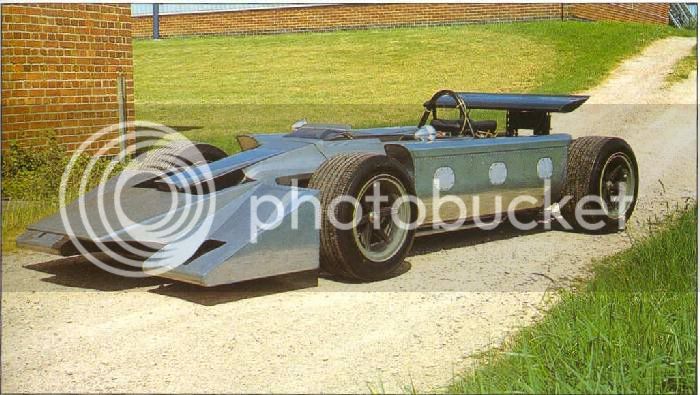 cider_and_toast said:
Now I've never seen the Aston car before GM but do you reckon that could be the first time an F1 car has used a forced air intake? I presume that's what it is on the front left side of the car?? I've never seen anything like that on any other car of the same era.

That's a very good question - I haven't got the answer, I'm afraid. You could well be right.

Although I know one of the four DBR4 chassis was sent out to Australia and had a much larger engine fitted for domestic racing out there - possibly this is that car. I have no idea though.

As for the Cosworth 4WD, can I be the first to say how GLAD I am that it didn't change the shape of F1! There were some much prettier 4WD machines around at the same time - Matra MS84 and McLaren whatever-it-was spring immediately to mind, as does the Lotus 63 (to a lesser extent)...

Some there on the Forix 8w site there was a great page on the cars that never raced but i cannot find it anywhere (well i think it was forix anyway).

There are some great bizzare entries and cars on there that has Gordan Murray put it 'GLAD it didn't change the face of F1' but then again never threatened to either.

If someone knows what im on about and can dig it up, it would be great if i could link to some odd attempts to get into F1.

Staff Member
Premium Contributor
While we are on the subject of un-raced formula one cars then I would like to put forward this offering.

Both March and Williams toyed around with a 6 wheeled car that unlike the famous P34 had two pairs of driven wheels at the back. Thankfully the governing body saw sence and banned these cars before they could take hold. There are times when you have to thank the FIA for taking action believe it or not.

Not only were both atempts at running 2-4-0 cars very ugly but can you imagine how F1 cars would look today?

These really are cars that didn't change the shape of F1

This little beauty from "Trebron", a project that never erally got off the ground in the early 90's.

I suspect the creator was a fan of the Arrows 'Doodlebug'

Staff Member
Am I perverse for actually liking some of these designs?

Valued Member
This one is in a similar vein to the Lotus 80 and the Arrows A2, the Ligier JS19

The sad thing is it might have worked until the FIA made them cut 30% of the skirts off. Who thought asking a driver to deisgn a car was a good idea, eh?

Am I perverse for actually liking some of these designs?
Click to expand

Depends on which ones?

Valued Member
Part of a car at least, the incredible BRM H16 engine...

It actually won a race, the 1966 US GP at Watkins Glen, driven by Jim Clark.

FISA had introduced a new rule that restricted the width of the rear wing. Ferrari reasoned that this did indeed apply to the width of "A" wing but did not specify how many wings of that width you could have. They therefore attached 2 wings that both complied with the width rule however they formed a wing as twice as wide as the ones that FISA intended to ban.

Sounds like the double diffuser issue only in the case of the double rear wing Tyrell lodged a protest and the design was withdrawn.

Staff Member
Premium Contributor
The story of the BRM H16 engine is interesting in itself. Several teams were caught on the hop when F1 changed from the 1.5 ltr to the 3ltr Formula for 1966. Lotus were still developing the DFV and for the start of the season at least had to use their 1.5ltr engines bored out to around 2ltrs.

The concept of the H16 was pretty simple. Take one 1.5ltr V8 engine and open it out. Take a second 1.5ltr V8 engine and open that out. Now stick one engine on top of the other driving a single drive shaft. Link the camshafts by a single belt and hey presto you know have a 3ltr engine. The other theory being that the output HP would double as well. And did it? Nah. The engine was heavy, thirsty and very very unreliable. Jim Clarks exceptional win aside it failed to achieve very much during its run. Once the Cossy DFV arrived on the scene the rest, as they say, was history.

Staff Member
Interestingly enough VW have gone back to the concept and now produce a W16 engine.

Friends of ours have one in their car, it's a beast of an engine.

Brogan said:
Interestingly enough VW have gone back to the concept and now produce a W16 engine.

Friends of ours have one in their car, it's a beast of an engine.
Click to expand

Yeah, but they still make a loss on every Veyron they sell.

Would love to have one though..

Technical The Fundamental Dichotomies of the other