I think we've seen a similar driver conundrum before. Think Robert Kubica vs. Nick Heidfeld. Robert came into the BMW team on a much higher trajectory than Nick (i.e. far more highly rated and with greater expectation), and I think most people at the time expected him to wipe the mat with the German; not because Nick was a terrible driver, but rather because Robert was considered so blindingly fast.

What became evident was that Nick was either far faster than people gave him credit for, or Robert wasn't as fast as originally implied; the white wash never happened. Robert proved quicker in out and out pace, but Nick was pretty close by, and actually outscored him during their three years as team-mates (similar to Jenson vs. Lewis).

The point I am trying to make is that one cannot extrapolate too much. Some drivers, like Heidfeld, seem to raise their level to whatever they are being directly compared to, where one wouldn't have foreseen such performance on the basis of prior evidence. Heidfeld happens to be an excellent example of this, as he raced against many other team-mates without ever thrashing those considered his inferiors, while usually matching (and sometimes bettering) those considered his superiors. In my mind he was the perfect number two driver to have in a team, for this very quality.

Whether Rosberg will respond in a similar manner is yet to be determined. Hamilton is almost certainly a driver who pushes the limits on the track more often than Nico is inclined to do. Nico gives me the impression that Jarno Trulli used to; blindingly quick, particularly for short periods of time, but often gets lost on race day.

But who knows! All I can hope for is that Rosberg responds positively to the pressure of having a team-mate considered so highly as Hamilton. Schumacher was a good warm-up in this regard.

Contributor
Raikkonen&Redbull=PartyTime I made the Trulli comparrison on the 2013 thread the other day. Actually currently Trulli shapes up better stats wise.

Contributor
snowy did you account for Trulli racing in a different points scoring era?

Also you prob need to take Trulli's Caterham and Minardi years out too as Rosberg has never driven a car that was a back runner like that.

Whatever the stats say I don't think I'm the only one that has likened the two. Its not too much of an insult though. Trulli kept pace with Alinso on hid day. 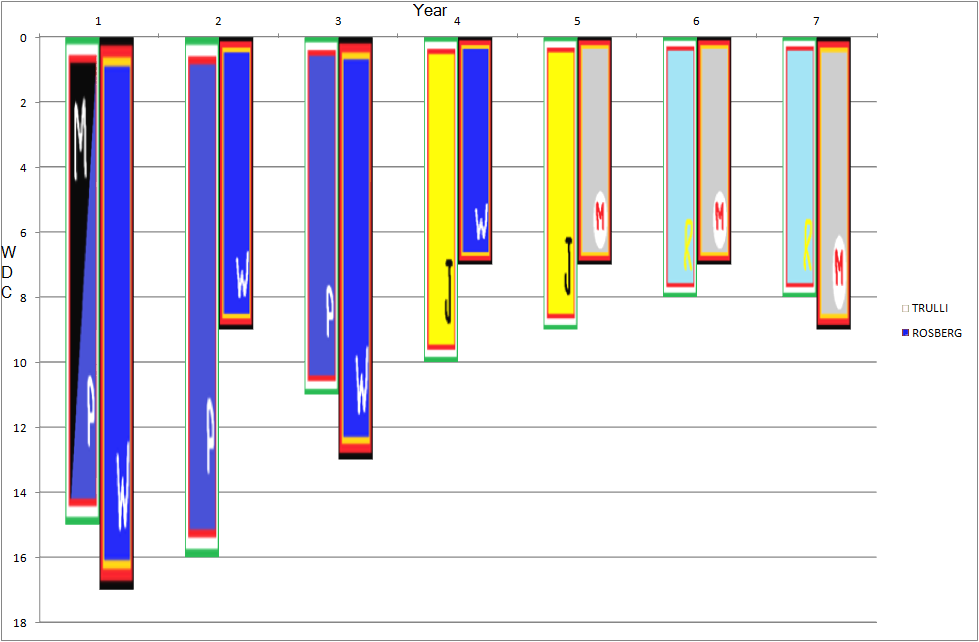