Who is George Russell asked Titch - well he's is 21 year old from Norfolk who the latest Brit on the F1 grid. For once I can actually say I've watched this kid all the way up the ladder.

I first saw Russell in BRDC F4 (thank you ITV4) and he stood out then because in a field full of kids putting everything on the line for a win he was the only one who had the brain to think about the championship race and realise getting a decent haul of points was sometimes more important than chucking it in do or die style for the win. Low and behold he won the title. I next see him in European F3 in a field containing Felix Rosenqvist, Antonio Giovanazzi and Charles LeClerc. He was mostly midfield that year but spent a lot of time wheel banging with LeClerc. Word in the paddock is the two really don't like each other much. Shortly after that he got the ART seat in GP3 and pretty much walked his way to the title.

Which brings us to last year in F2. I'll be honest as much as I rated Russell I thought he was going to be crushed by Lando Norris - he wasn't. Once again he used his tactical brain to consistently get results and dominate the championship. It was very impressive considering the strength of the field. So Russell comes into F1 with back to back titles in GP3 and F2. The only other person to do that is his mate Charles LeClerc. So Russell is a very deserved addition to the grid.

With all the good stuff out the way it's time to focus on the bad news for Russell. As much as he is probably ecstatic to be in F1 his head is probably dropping at the fact that the team he has signed for have some serious problems. Williams have already missed two days of testing and the car is rumoured to be even slower than last years. So it could be a season of being at the back for George which is all good as long as he beats his team mate right? Well unfortunately this is not a good situation for Russell either as his team mate is Robert Kubica. If Russell beats him it'll be put down to the fact that Bobby is not the same driver after his injuries. If he gets beat by him people will ask why he couldn't beat a veteran who suffered almost career ending injuries. It really is a no win situation.

Russell's saving factor might be the fact he is a Merc junior driver. He has to hope that he has a good enough season to make people forget Ocon is on the sidelines. That paired with Bottas having an awful year could see Mercedes decide to take a chance on him in the A team. Personally I don't think Mercedes would ever run two Brits in their car so it might be the best he can hope for is a Racing Point seat becoming open. 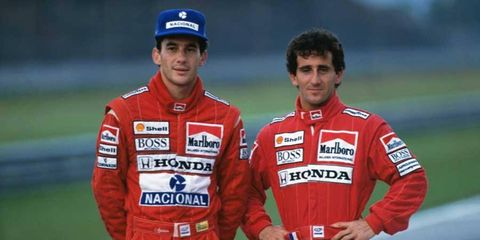 Contributor
2 years that were disastrous and is the reason no sensible team tries it again.

Verstappen is the one Merc may hold out for but at what cost?

A left field choice would be to bring Vandoorne back into F1 but only if he becomes Formula E champion, De Vries is too inexperienced at this point to be considered

the key telling point is what is Hamilton's new contract length going to be , 1 year suggests 1 more title when all records are broken then that is it for Lewis. Any longer puts the pressure back on Bottas

Contributor
Il_leone if a Merc drive was available and Merc were interested then all those drivers would pimp their granny out to get it and buy out all sorts of contracts.

RasputinLives said:
2 years that were disastrous and is the reason no sensible team tries it again.
Click to expand

McLaren had a history of having multiple drivers with a chance of winning:
Other teams have a history for allowing drivers to race:
Williams

Contributor
Out of all those pairings you have mentioned there were only 2 drivers that achieved a title whilst the were partner with that team mate - I'm not counting Coulthard/Hakkinen because then idea of them being equals in the team is frankly ludicrous given what went on. More titles lost through those pairs compeating with each other than won.

The fact you've had to include Montoya and Half Schumacher in the list shows how few pairings and examples there are.

RasputinLives said:
Il_leone if a Merc drive was available and Merc were interested then all those drivers would pimp their granny out to get it and buy out all sorts of contracts.
Click to expand

You mean like Mclaren in 2008 when Alonso was going to leave the team and pretty much every driver asked including Ralf Schumacher who Mclaren rejected. Sure no doubt but there will only be a shortlist they would seriously consider

Verstappen would but I am not sure he is worth the hassle but at the same time I want to laugh at Red Bull especially Marko and Horner for failing to give him a car that can deliver the title despite doing everything to accommodate him. Then again it would be funny if Mercedes told Verstappen to sort out his own contract issues first

Anyone else is after this lot


Ocon - the result on Sunday will help him get his confidence back as long as Alonso does not destroy him next year
Last edited: 31 August 2020

Valued Member
Russel won't be allowed to drive the Merc until Lewis decides he's had enough as Mercedes won't want two British drivers in their cars.

FB said:
Russel won't be allowed to drive the Merc until Lewis decides he's had enough as Mercedes won't want two British drivers in their cars.
Click to expand

Contributor
Lewis will retire at the end of 2021 with all his records and no risk on being in a duff team after the rule change.

RasputinLives said:
Out of all those pairings you have mentioned there were only 2 drivers that achieved a title whilst the were partner with that team mate -
Click to expand

You sure about your maths there mate?

Contributor
Well I said I wasn't counting Hakkinen because the idea of him and Coulthard being equal is laughable. I'd forgotten about Hill and Jones but I would argue that Hill was number one over JV who was in his rookie year.

Staff Member
Valued Member
And if you count the fact that Reutemann had a falling out with Lotus when the Type 80 proved to be shit therefore he ended up leaving early to join Williams, and Colin Chapman was very much a Mario Andretti fan then yeah, OK, it was 2.

RasputinLives said:
Lewis will retire at the end of 2021 with all his records and no risk on being in a duff team after the rule change.
Click to expand

Contributor
Why risk it? By the end of 2021 he'll have every record there is. Why bother rebuilding in the new rules and risking not being out front like he is now? What would he gain. Nah I reckon he'll call it a day and go off somewhere to concentrate on his music.

RasputinLives said:
Lewis will retire at the end of 2021 with all his records and no risk on being in a duff team after the rule change.
Click to expand

Disagree he still seems hungry. I think he will sign a 1 year contract to see what 2022 brings.

yeah i think that if Hamilton in 2022. has the chance to win & battle with these new cars. he could be a new kimi

Can't ever seee Hamilton cruising like Kimi waiting for contract time, then wake up and see if there is a team with a prospective good car and take him on for a glory season, Kimi still has it and only a sniff at a podium will drag it out.🙄

FB said:
Russel won't be allowed to drive the Merc until Lewis decides he's had enough as Mercedes won't want two British drivers in their cars.
Click to expand

There are not any young German drivers good enough to step into Merc nor many drivers they are deemed worthy to replace Hamilton and fill his boots. So unless the former arises then Russell still might