Valued Member
As the grid in 2015 looks to be one of the smallest and there are constant moans and gripes about competitiveness I thought I look at some stats on the teams since 1950. So here's the highlights I picked out, let me know if you want more in depth information and I'll see what I can generate.

The conclusion I draw is that F1 isn't fair.

What team (or teams) won a WDC but not a WCC? And have any teams done the opposite and won the WCC but never the WDC?

Staff Member
Premium Contributor
Well Vanwall won the 1958 WCC but failed to win the WDC at any stage.

I would imagine that the only team to win the WDC but not the WCC were Alfa Romeo because the WCC wasn't around when Farina won the title in 1950.

Staff Member
Premium Contributor
further to my last, there have been a number of seasons since 1958 where the WDC was not in the same team as the WCC (1973 for example) but all of the teams involved in those years have won the WDC and WCC on other occasions.

Valued Member
So, only 16 teams have won a wcc, and 6 of them are still around in one form or another.

Valued Member
cider_and_toast is right, Alfa are the only team to win the WDC and not the WCC as it didn't exist. Here's the list of Championship winning constructors. 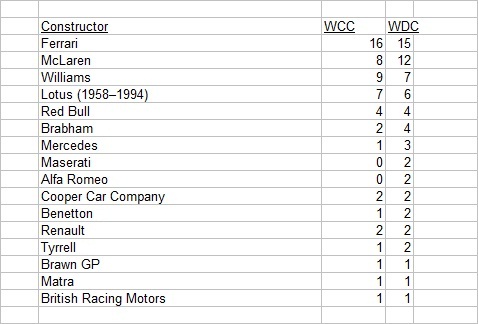 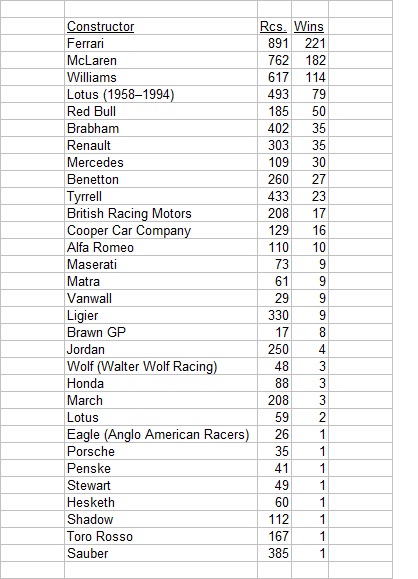 Contributor
I suspect that the majority of the 137 teams came into being during the Coventry-Climax, and Cosworth-Ford eras, when over-the-counter, highly competitive engines and transmissions were available to all. I know that to be the case for at least 16 of the race-winning teams. Teams like Wolf, Hesketh, Ensign etc were essentially the creations of single, wealthy individuals (and we aren't talking Bill Gates-like wealth), while others, like Brabham, McLaren, Surtees and so on were created by drivers that thought they knew a better way to do things, but wouldn't have had the financial wherewithal to create their own powertrains as well as the chassis.

Contributor
That last table suggests that the most successful team ever was Brawn GP, winning 47% of the races they entered (Red Bull have only managed 27% by comparison, and Ferrari a paltry 25%...)

I really do salute you for this posting. It certainly cannot be easy (more like verging on the impossible) to ascertain when one team ends and another, frequently thru acquisition, begins.

Staff Member
I still have all of the data from the entire database we used to have on the site.

One thing which struck me when we were compiling the data is how few WCC and WDC there have been.

Contributor
It used to be that if someone was a multiple WDC, the odds were that their titles were separated by several years. That was the cas with Clark, Brabham, G. Hill, and Stewart.

Now, the titles come in bunches due to superiority of the car where in decades past, I think there was more equality among the cars.
That was true (the car equality) as recently as the titles of Damon, MS at Benetton, JV etc. It seems to me that that equality began to vanish around 2000, and has never made a return.

I would add that my interest in the form began to wane about that time (coincidence?) and has never returned either
Last edited: 20 March 2015

Interesting then that the most recent World Champion had the longest stretch between Titles of any driver in history.

Doubly interesting that one of them was among the most closely contested battles ever.

So you are saying that Rosberg is an all time great racer, since Hamilton had such a difficult time eliminating him?

And when Hamilton wins again this year, if for nor other reason than he is the higher paid of the two, that simply proves my point. It is more and more the car that matters, not the driver.

Rosberg was fantastic on Saturday last year. He was thoroughly dominated on Sunday. The main reason it stayed so close for so long was because reliability issues hadn't evened themselves out yet. The final margin of 67 points was fairly representative of the way Nico was handled by Lewis last year. (regardless of the double dip)

Staff Member
Premium Contributor
Robert Kubica in the BMW Sauber, Canada but can't remember the year. I want to say 2010 but may be wrong on that

Contributor
Is that really a win for Sauber? You see I'd class that as a win for BMW and not the real Sauber team.

F1 to use AI for TV Graphics