Valued Member
I've been having a little wander through a patent search engine recently to see what the F1 teams look to patent. Strangely there doesn't seem to be that many but as I find anything interesting I'll post them up.

I'll kick you off with one from 1979 filed by Anthony Colin Bruce Chapman and Peter Godfrey Wright for a "Ground Effect Vehicle". Oddly, the picture they have chosen to demonstrate how ground effect will work is on a truck.

Contributor
If you patent something then you have to explain how it works and give full details. F1 teams don't work like that, secrecy is the watchword.

Valued Member
Indeed so Bill, although you would think they would protect some of their inventions which might have applications outside of the field of F1. I've come across a few others, Frank Dernie has patented active suspension (or at least the general principle) on behalf of Williams GPE and McLaren Automotive have a patent on a steering wheel which can also be used on a games consul.

Contributor
That doesn't suprise me at all.F1 innovates very little worth patenting.
F1 usually takes existing technology from road cars and develops it to its maximum potential very quickly.
ABS for instance was copied from the aviation industry.Traction control from strangely enough the agriculural industry.
KERS from the road car industry.
Anything F1 does invent has a very limited field of use that patents are not really necessary.
Production vehicles with active or semi active suspension.If you include Hydrolastic suspension you can go back even further.

Valued Member
Well the good Doctor Posthelthwaite has a patent on a hydraulic suspension filed on behalf of the Tyrrell Racing Organisation.

Contributor
That is dated 1995.

Hydrolastic is a type of space-efficient automotive suspension system used in many cars produced by British Motor Corporation (BMC) and its successor companies.
Invented by famous British rubber engineer Alex Moulton, and first used on the 1962 BMC project ADO16 under designer Alec Issigonis (of Mini fame), later to be launched as the Morris 1100

Contributor
I had both 1100 and Maxi's never a spot of bother.BL also ran this rally car.The Landcrab as it went sideways a great deal 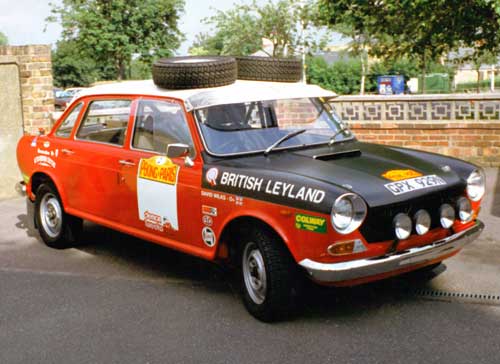 The 1800’s finest hour was to be the 1968 London – Sydney Marathon. Freed of the usual minefield of rally regulations, Marathon rules boiled down to any two wheel drive car with a maximum height stipulation so that the cars would fit a ship’s hold. The final specification of the Marathon cars was based on the newly introduced Mk2 1800S models but with some major modifications. Built up from bare shells, the engine was not highly tuned, its capacity was increased to 1894cc, the camshaft was standard MGB and the head was re-worked by Downton, with twin 1¾ SUs and a special exhaust. A competition clutch to standard gearbox ratios coped with a reliable 100bhp at the flywheel (about 77 at the wheels) – not much for such a heavy car. Seven cars were prepared (five Works cars and two prepared by special tuning for the RAF and the Navy). All the Works cars completed the event and SMO 226G, crewed by Paddy Hopkirk/Tony Nash/Alec Poole, was placed 2nd overall. It was during the London – Sydney that the ‘Landcrab’ nickname for the 1800 was first coined, an Australian photojournalist, whilst photographing the event from a helicopter, casually observing that the Austins looked like ‘Land Crabs’ as they cornered sideways!