Contributor
I found this comparison on the German Wikipedia, where you can first find the actual driver's Top 10 point scorers,which looks like this and basically tells us nothing apart from the fact that Seb has dominated the time after the new points system was introduced: 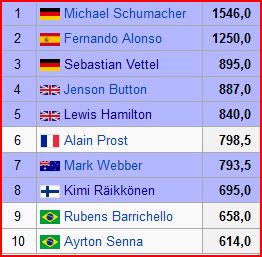 And here you can see the driver's Top 10 how it would look like if we had always had the current points system. 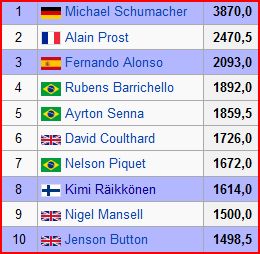 First I was a bit surprised to see Rubens Barrichello ahead of Ayrton Senna in both tables. On a second thought he was around extremely long, so it's not that surprising.
I'm still mightily impressed to see Fernando Alonso being third in the adjusted table.

What do you guys make of that table?
M

Contributor
I notice that Seb, Webber and Lewis drop out of the top ten as the new 25 points for a win flatter their tally..

Staff Member
It doesn't really mean much as the more races a driver has done, the more points they are likely to have.

You would need to divide the total points by number of races to get a more realistic comparison.

But then of course you would get those people who say, "Ah, but such and such driver wasn't in a competitive car for x races, so you need to factor that in".

Then someone else would say, "Oh and there were a lot more/less cars on the circuit during x years, so that needs to be taken into account".

I believe just such an exercise has been attempted a few times in the past and ultimately it's a waste of time.
M

Contributor
I actually meant to put a wink at the end of my post |'ve fixed it now...

Contributor
I'm not surprised Alonso's 3rd, as you can see Button and Raikkonen are close by, his nearest benchmark (as they all started out near enough the same time). Button being in far less competitive cars, and Raikkonen being out of the sport for 2 years, and far more reliability issues, kind of evens out.

Valued Member
Slyboogy - I'm not surprised Alonso is third. Look at that top 3 - long consistent careers, taking plenty of wins but also plenty of podiums and nearly always finishing in the minor points.

I think it's a good thing the new points system makes stats like these useless, because due to the reliability these days and mopre races a season you can't really compare it anymore anyway.
In the early seventies there were 10-14 races a season and a driver was lucky if he finished in half of them. Now there are 20 races and a driver is unlucky if he finishes in half of them. So for the topdrivers it's a lot easier to score a lot of points.

Valued Member
Now there are 20 races and a driver is unlucky if he finishes in 18 of them...