As the 1976 season drew to a close, the F1 teams were packing away their kit from the US GP at Watkins Glen and getting ready to return home. James Hunt had won the race and carried a 3 point cushion going into the final round which for the first time would take place in Japan in 2 weeks time.

The teams had all agreed that they would not test in Japan however, at the last minute, McLaren saw an opportunity, packed their gear up and managed to get it on an early flight which would enable them (despite the Gentleman's agreement) to get a couple of days testing at the Mount Fuji circuit prior to the other teams getting there.

So the story goes that the Ferrari mechanics got wind of what McLaren were up to and tried to get their own kit on the same flight. Unfortunately, there was only one phone in the pits at Watkins Glen and when Maranello called to try and confirm the arrangements, it just so happened that the person who answered the phone handed it to a McLaren Mechanic. The mechanic in question realised what the call may be about, stalled the caller and then handed the phone to another team member who claimed no knowledge of what the caller on the other end wanted. Apparently this went on for some time and by then it was too late to book the earlier flight and McLaren were the only team who made it to Japan early for some crucial testing.

On race day itself, as most of us know, it was pouring with rain. Another story, which alongside the above, Ron Howard left out of his film Rush, goes that after the race was postponed for a few hours, the drivers disappeared from the grid. When it was time for them to return, there was no sign of James Hunt. McLaren, starting to panic, sent mechanics searching everywhere for him. It was however, Patrick Head who stumbled across James Hunt in an empty pit garage receiving some attention from a Japanese pit girl who, to put it politely, was knelt before James and I'll leave the rest to your imagination.

What else was special about that race? Well, until then Motorsport had never really made much impression on television. Unless there was a spectacular crash or tragic death (of which there were many in this era) it tended to be off the front pages. Hunt however, was a new type of driver, flamboyant, charismatic and, in his rivalry with Lauda, had captured the imagination of the British public. The BBC caught on to this and for the first time would have cameras at the circuit to cover the race. This led to a regular slot on BBC2 the following season covering the highlights of each race in a show called 'Grand Prix'. So from a British point of view, the 1976 Japanese GP really was the start of modern formula one as we know it.

So what of the current race? Well, the Suzuka circuit, first opened in 1962, hosts the 27th Japanese Grand Prix. It would be impossible to complete any review of the circuit without mentioning the fact that it is the only circuit on the calendar that runs in a figure of 8 configuration. Popular with drivers and fans alike, this thread could run into many thousands of words just covering some of the incidents that have occurred at this track over the years.

One driver who will be looking to show bouncebackability here will be Lewis Hamilton. After the heartbreak of losing a nailed on win in Malaysia he now finds himself 23 points behind his team mate going into the final 5 races. In 2015 and 2014 Hamilton finished on the top step of the podium with Rosberg in second however, on both occasions Rosberg had qualified on pole. Given the way this momentum has been swinging between the Mercedes drivers this season, this one is definitely too close to call.

We can definitely say the Red Bull team are now back in the mix. While not quite there on pace they have a really solid car and two drivers who know how to use it to its best. With Ricciardo winning in Malaysia, Verstappen will be looking to fight back and it will be another great inter team battle to watch.

Then we come to Ferrari, oh dear, oh dear, what a season it's not been for the Scuderia. Without a win since Singapore last year, they haven't won a Japanese GP since 2004. The team seem to be tactically inept whenever they get the car right or just fail to get the car right at all. They aren't quite having as bad a season as 2014 but Vettel really must be wondering now if he made the right choice.

McLaren are finally showing signs of being able to compete in the top ten. Alonso's performance in Malaysia to fight through from the back shows he still has 'it' and I would expect both McLarens to run well here and challenge for points.

As for the rest of the field, as we move into the final few races the focus is definitely on the championship end of the grid. Williams and Force India are separated by just 3 points in the constructors championship going into this race and both will want to clinch 4th in the table. While Force India continue to punch way above their budget, Williams performance this year has been far below the expectations given by last years chassis and engine. It was announced over the weekend that Bottas would remain with the team for next year and there is a driver who is in very real danger of becoming a forgotten man. Where once he was talked about as being not only a potential world champion but certainly looking at a Ferrari or Mercedes seat his performances this year suggest that early promise isn't there.

There are a few more questions such as will Sauber ever get a point this season? Will Palmer be able to build on his first point of the year, can Haas get anywhere near the top ten and why have they gone off the boil so badly? Which of the TR boys will come out on top now that Danny K seems to have his mojo back and can Ocon finish ahead of his highly respected team mate again?

All this and more will be answered over the weekend.
Last edited: 3 October 2016
Click to expand 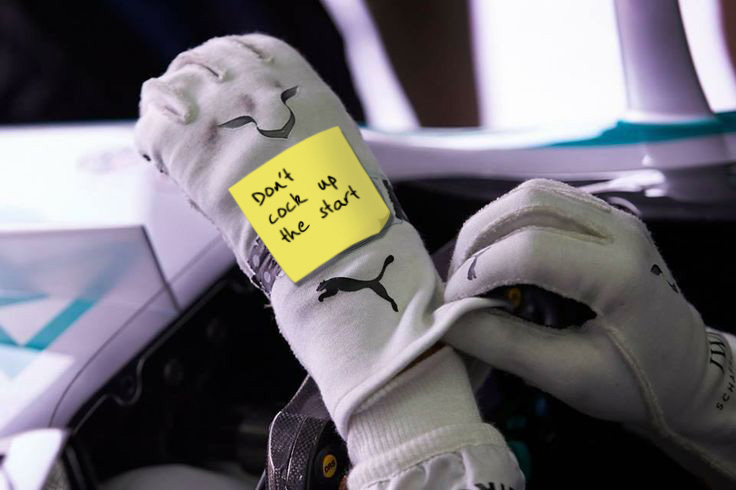 racecub said:
cousinDave i found this article. It only covers the first 14 races and it shows places lost and gained at the start. It's obviously easier to make up more places if you start further back, but still sone impressive statistics in there.( Alonso, Sainz , Wherlein)

Who is the fastest starter in F1?

Like you said, it is easier to make up positions from the back of the grid (even without passing anyone if those ahead have fallen off the track), and easier to lose positions if you are at the other end.

Supporter
Obviously Lewis had an awful start, but in actuality this thing was pretty much decided on Saturday by 13 thousandths.

I know he had won from 2nd the previous 2 meetings at Suzuka, but I certainly wasn't penciling in victory on Saturday night this year. And considering that, he really only lost 3 points in the race.

No comparison whatsoever with the 25 dropped at Malaysia.

Contributor
I don't think he was pencilling in victory on Saturday night in 2014 or 2015 either, and in actuality, a good start could have given him a position to win from. If he had won and Rosberg had come second, the difference in points between the two Mercedes drivers would have been 13 less than it is now.

Yes, and if he would have crashed into Verstappen instead of avoiding him, the difference would be 15 more.

Supporter
And if my Aunt had balls she be my Uncle....

He started 2nd and finished 3rd. Not sure why we are acting as if his start in the 2016 Japanese GP cost him the Championship.

Wombcat said:
Yes, and if he would have crashed into Verstappen instead of avoiding him, the difference would be 15 more.
Click to expand

Why would he crash into Verstappen?

Why would he crash into Rosberg in Spain?

KekeTheKing said:
And if my Aunt had balls she be my Uncle....

He started 2nd and finished 3rd. Not sure why we are acting as if his start in the 2016 Japanese GP cost him the Championship.
Click to expand

But when you're in the last chance saloon, as I and maybe some others defined as the start at Suzuka, then mistakes are amplified, at least for those who saw it that way. So his championship hopes changed more in the first few seconds of the Japan GP than they did in Malaysia, or anywhere previously. I think he had a chance to be WDC before the start at Suzuka, but not after.

Valued Member
It's a cumulative thing though. The starts have cost him lots of points against Rosberg even if he finished 2nd in the race. It's just another 3 on the tally.

Contributor
I think the bad start cost him confidence more than anything else and he needs that right now.

Supporter
Austin should be good for that.

Staff Member
Premium Contributor
Indeed. Austin is Hamilton's track. As long as the car holds together he should win there.

Contributor
He is pretty good in Austin! Prob one of his best tracks so a good one for him to come too. Rosberg was no slouch last year though.

Wombcat said:
Why would he crash into Rosberg in Spain?
Click to expand

Uhm, because he was pushed onto the grass? No traction on grass.

Valued Member
If the theory is that history gives him a win in Austin, then as surely he is screwed in Sao Paulo.