Valued Member
It was a case of deja vu for HRT in 2011, with a woeful car unable to qualify for the opening race, and an initial driver pairing that failed to see out the season. 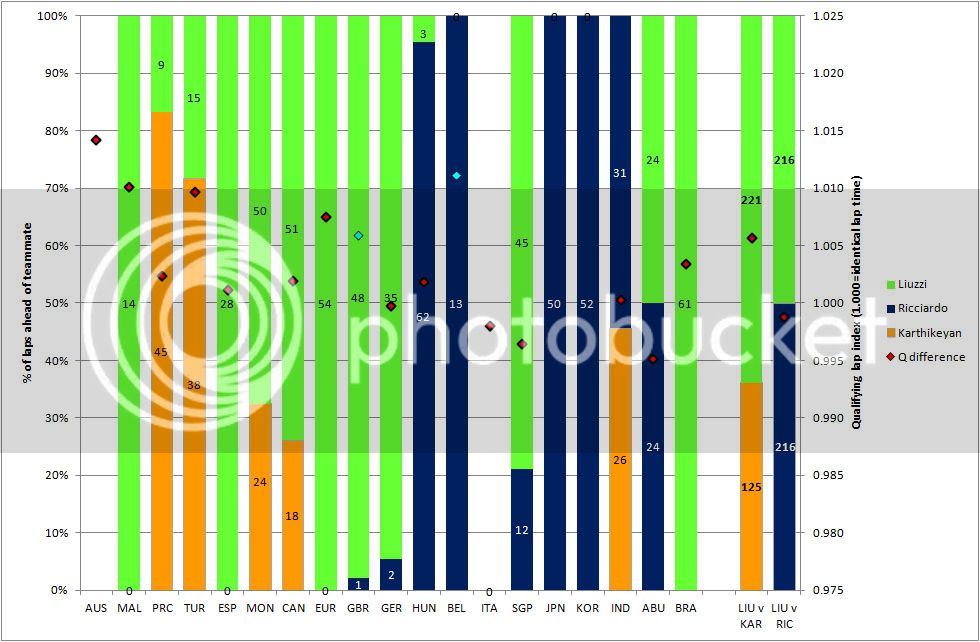 
At the start of the season Liuzzi was expected to be the lead driver for the team with Karthikeyan, five years out of F1, providing financial support. So it proved, with Tonio four times qualifying Narain by over 0.8s, though the Indian did well to get within 0.1s in Catalunya.

For Silverstone, promising Red Bull Junior driver Daniel Ricciardo was given Karthikeyan's seat to make his Grand Prix debut. After a couple of races settling in, Daniel proved a pretty equal match for Liuzzi over the balance of the year. At Spa Liuzzi's wet weather experience perhaps paid dividends, but in dry qualifying Ricciardo edged in on average. Strikingly, the laps led battle came out precisely equal between the two of them - although several pitstops for damage and delays letting faster cars past over the year made this far from a pure comparison.

In Italy, Liuzzi's first lap demolition job means no race comparison was possible, while in Japan and Korea only one of the HRT cars was able to register a lap time in Q1. Karthikeyan returned to replace Liuzzi for his home Grand Prix and performed admirably, getting extremely close to Ricciardo in qualifying and finishing ahead of his delayed team mate in the race.

Valued Member
So that leaves Renault and the coup de grace, then?