Supporter
By special request I have created a Highlight Package for the 1981 race at Jacarepagua. The only version I have includes Japanese commentary, so I've added a music soundtrack from the 80/81 period to one of them. Hope you enjoy!

Supporter
Here's my Overtaking Summary for the race as well.

No Safety Car starts in those days!!!

I'll have to check out the whole video a little later as i'm at work. Thanks for the package, Keke!

You ARE The King!

O boy! Winner Reutemann looks even happier on the podium than Hamilton did in Turkey last year!

Lole' ought to have been extatic and enjoying the Champagne in South America. He looks like his dog died!

Here's a very recent description of the Team Orders fall out at that race...the first major public one at a time when F1 was just begining to expand globally through TV: 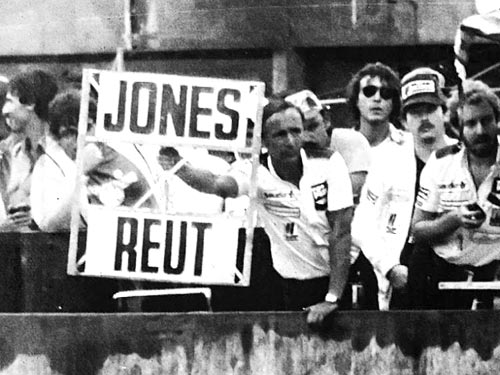 There was a picture someone posted in a thread I started on 606 which was a colour photo of Frank Williams waving a large wrench from the pit wall at Reutemann's car...Frank was unhappy because Carlos wasn't giving up the lead to Jonesy.

All the stuff on 606 has vanished.

The deal Carlos had signed with Frank was that if he was less than 7 seconds ahead of AJ, then he had to give up position. In the event, the lead stretched out to over 10 seconds before settling in to less than 7 secs.

Supporter
After watching the race I can see why Reutemann didn't want to give way to Jones. Alan only briefly challenged Carlos in the early stages, and as Ray said, the gap fluctuated between 5-10 seconds for most of the Grand Prix. I would love to have heard Hunt's take on this one. The BBC coverage must be out there somewhere. Has Webber already had his turn to pick the classic GP's for BBC? Brazil 81 might be a good start.

This race with "JONES-REUT" was the first ever "Senna-Prost"- / "Hamilton-Alonso"-type controversy in the 'modern' Formula One era and was a precurser to what Williams would experience mid decade with "Mansell-Piquet".

Something changed in the year or two prior to 1981/82. In 1979, Gilles Villeneuve stayed behind Ferrari teammate Jody Schechkter in Italy with the South African winning the title from the Canadian...and then all sense of "honour" went out the window in 1981 and in 1982 (especially for Ferrari with devastating and ultimately tragic consequences).

So when something small as Webber-Vettel happens at Silverstone in 2011, I tend to just chuckle at the 'smallness' of it. It's nothing in comparison to what's gone before. The worst of it was probably Senna nearly forcing Prost into the pit wall while the Frenchman was trying to take the lead in Portugal in 1988.

RayInTorontoCanada said:
The worst of it was probably Senna nearly forcing Prost into the pit wall while the Frenchman was trying to take the lead in Portugal in 1989.
Click to expand

There have been worse squeezes, before and after. But James does call it Formula 3 tactics.

That race was fantastic, wasn't it?!

That race was fantastic, wasn't it?!
Click to expand

Thanks mjo. It was a great race for Reutemann, that's for sure. Jones wasn't that thrilled, failing to appear on the podium.

What a crazy start though, with terrible camera angles to actually see what happened. The race was basically split up right away, with the circuit being almost completely blocked. It was good for Keke while it lasted, but the Fittipaldi just didn't have the legs to keep up. Quite a performance by Surer as well, notching Ensign's best finish ever.

KekeTheKing said:
It was a great race for Reutemann, that's for sure. Jones wasn't that thrilled...

...It was good for Keke while it lasted, but the Fittipaldi just didn't have the legs...
Click to expand

Ironically, both Reutemann victories for Williams that season had him not spraying the champagne on the podium. This thread highlights why it happened to be that way in Brazil, but the Belgian GP at Zolder was a horrific nightmare...Reutemann ran over an Osella mechanic in the pits (I forget if he was killed or not) on Saturday...and the start on Sunday was even more appalling when Patrese's Arrows stalled and a mechanic who tried to help him was then hit head on by the 2nd Arrows of Sigfried Stohr after the starting lights went green, sandwiching the poor guy between the cars. I saw it on tv as a kid. Horrific memory!

[You Tube has the start which had a chaotic grid formation with some cars 'rolling'. Perhaps Keke can put it up?]

Also, that Fittipaldi was an absolute dog. Not only that, it was a Dog with Fleas! Rosberg got as much as he could out of it...and that's the type of sharp and ballsy driving by the Finn which attracted Williams to Keke for the following season when Jonesy decided to retire from F1 late in the year (1981).

KekeTheKing said:
There have been worse squeezes, before and after.

I certainly haven't seen them... (apart from Schumacher on Rubens last year)
Click to expand

Incubus, I originally (post # 8 in this thread) meant intentional squeezes on your 'teammate'. Yes there have been some bad/worse squeezes than Senna on Prost in Portugal in 1988...but I was mainly citing it in the context of "teammates".

Supporter
@ Incubus. Plenty of teammates have come together. Senna squeezed, but there was more than a car width left. (BTW, I'm not defending this kind of maneuver)

Oh right, but I meant the only ones I can think of that were worst than Senna on Prost or Schumacher on Rubens were the ones... that did result in collisions.

Back in the late seventies/early eighties there one one driver who was, rightfully or wrongfully, consistantly accused of having a monopoly on "the art" of squeezing.

One italian gentleman who was more famous for his squeezing than his driving...

Giovanni Amadeo did succumb to his injuries on the Monday following the Grand Prix.

Dave Luckett, from Arrows, was fortunate to survive his incident on the grid.

KekeTheKing said:
Dave Luckett, from Arrows, was fortunate to survive his incident on the grid.
Click to expand

I was sick to my stomach when I watched it as a child. The memory still remains. Mercifully he lived!

RayInTorontoCanada said:
I was sick to my stomach when I watched it as a child. The memory still remains. Mercifully he lived!
Click to expand

Just imagine how Sigfried Stohr must have felt!

Hey, Keke, do you have an edit of the start of the 1981 Belgian Grand Prix lying around?

There were a number of extraordinary things taking place on the grid that Sunday.