Space Shuttle Endeavour Due To Launch, Monday 16th May 2011

Supporter
This may be a bit early, but there are mitigating circumstances...

The Space Shuttle mission STS-134 is due to launch on the 19th April 2011. If it does launch as planned, then in may be the last Shuttle mission, ever.

During the 14-day mission, Endeavour will deliver the Alpha Magnetic Spectrometer (AMS) and spare parts including two S-band communications antennas, a high-pressure gas tank, additional spare parts for Dextre and micrometeoroid debris shields. This will be the 36th shuttle mission to the International Space Station.
Click to expand 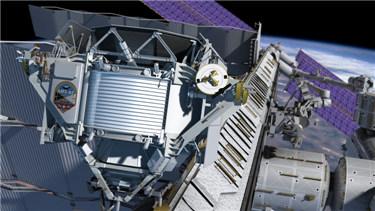 Assuming everything goes swimmingly for Endeavour, STS-134 may well be the last Shuttle mission. Atlantis is earmarked as mission STS-135 as a rescue mission, if anything goes pear-shaped for Endeavour and the crew requires a lift back to Earth.

Based on recommendations made after the loss of space shuttle Columbia in February 2003, NASA has trained a launch on need crew to be ready to fly in the event of irreparable damage to a shuttle while in orbit. Typically, the next crew to fly serves as the rescue crew for the current mission. The STS-335 crew will prepare for a potential rescue mission and preserve flexibility if another shuttle flight is added to the launch manifest.

“These astronauts will begin training immediately as a rescue crew as well as in the baseline requirements that would be needed to fly an additional shuttle flight," said Bill Gerstenmaier, associate administrator for NASA's Space Operations Mission Directorate in Washington. "The normal training template for a shuttle crew is about one year prior to launch, so we need to begin training now in order to maintain the flexibility of flying a rescue mission if needed, or alter course and fly an additional shuttle mission if that decision is made."

If required, the STS-335 rescue mission would launch on shuttle Atlantis in June 2011 to bring home the STS-134 crew from the International Space Station. STS-134 currently is scheduled to lift off on Feb. 26, 2011, from NASA's Kennedy Space Center in Florida. If converted to an additional shuttle flight, STS-335 would be redesignated STS-135 and targeted to launch in June 2011.
Click to expand

Of course, when it comes to NASA and US funding, things may change. It could be that Atlantis may well be the last mission in June 2011, but as things stand STS-134 is the last Shuttle mission.

So, as Endeavour's launch on the 19th April may be the last, it may be worth keeping an eye on the launch, as will be history in the making....

Keep an eye on CTA, as there will probably be regular updates.

Supporter
It appears that Endeavour will not be the final Shuttle mission, as NASA was given the authorisation late last year, to Launch Atlantis in June 2011.

In late December, the agency’s Space Operations Mission Directorate requested the shuttle and International Space Station programs take the necessary steps to maintain the capability to fly Atlantis on the STS-135 mission.

The Authorization Act of 2010 directs NASA to conduct the mission, and baselining the flight enables the program to begin preparations for the mission with a target launch date of June 28. The mission would be the 135th and final space shuttle flight.
Click to expand

http://www.nasa.gov/pdf/531933main_STS134_MissionSummary.pdf
So, it appears that I missed the bit of news about Atlantis going ahead in June!

STS-134, Space Shuttle Endeavour, will be the penultimate Shuttle mission...

​
It appears that Endeavour has been damaged!

Over a few days last week, the Shuttle was on launch pad 39A for the launch dress rehearsal that included the crew for the upcoming mission, due to launch on April 19th.

Whilst the Shuttle was on the pad, it was damaged by a severe storm that hit Florida. Technicians have undertaken a preliminary inspection of the external fuel tank on Friday, but further (more extensive) inspections are to be conducted..

Technicians and engineers on Launch Pad 39A at NASA’s Kennedy Space Center in Florida, will begin detailed inspections of space shuttle Endeavour and its external fuel tank Saturday afternoon. They’ll look for any possible damage from severe storms that hit Kennedy on Wednesday and Thursday. Teams began an initial survey of the launch pad Friday, but weren’t able to do a thorough inspection because the pad was being used for a full launch dress rehearsal for Endeavour’s STS-134 mission called the Terminal Countdown Demonstration Test (TCDT). Endeavour’s six astronauts successfully completed the simulated launch countdown and related safety training Friday afternoon and returned home to NASA’s Johnson Space Center in Houston. Friday’s initial pad inspection did not find anything obvious, other than the previously identified minor foam insulation damage on Endeavour’s external tank that was caused by a strong storm on Wednesday. Teams will install platforms Saturday morning that will allow for close up surveys, which will provide data to engineering reviews to confirm there are no other issues. Endeavour is targeted to launch to the International Space Station on April 19 at 7:48 p.m. EDT.
Click to expand

Here's hoping all will be well, or repairable...

Staff Member
So a bit of wind is able to damage a vehicle which flies at supersonic speed through the atmosphere?

Am I the only one who thinks American paranoia makes space travel harder than it actually is?

Staff Member
It's definitely a risk-averse culture they have in NASA.

But if it takes this long to prepare for a launch, which can be aborted at the last second due to a bit of rain or wind, how on earth is Virgin Galactic going to be remotely feasible?

Contributor
For some reason this springs to mind.....

It wasn't the wind, it was that when they turned up in the morning they found some blue paint near the base that was traced to a 1982 ford transit. Ongoing investigations are underway to check the aerodynamic impact of the "supermarket ding", whilst local police are seeking a very slow moving beastie boy

Supporter
Latest Shuttle News and News of a Change of the Launch Date.

Apparently, neither the Shuttle Endeavour itself or the external fuel tank were damaged by the high winds last week, the issue is with the insulation foam surrounding the fuel tank..

Also, the launch date of Endeavour has changed, due to a scheduling conflict with a Russian supply vehicle. NASA managers will now meet on Friday 19th April, to discuss the shuttle team's readiness to launch.
The new targeted launch date is now Friday, April 29th.

NASA managers will hold a Flight Readiness Review on Tuesday, April 19, to assess the team's readiness to support launch. An official launch date will be selected at the conclusion of the meeting.

NASA has targeted the launch for Endeavour's STS-134 mission for 3:47 p.m. EDT on Friday, April 29 due to a scheduling conflict with a Russian Progress supply vehicle scheduled to launch April 27 and arrive at the station April 29.
Click to expand 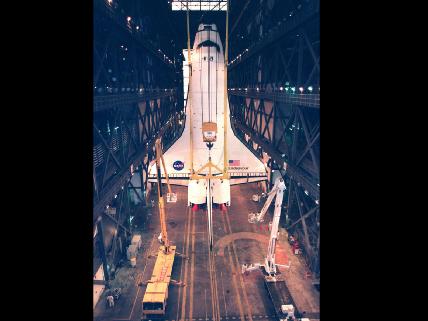 Archive photo of Endeavour being lifted​

Contributor
So the Russian launch is causing Intersteller traffic jams lol. I wonder how they work out who has right of way. I'm sure there is something happening on the 29th but hopefully I'll get my eyes on the launch instead.

Supporter
Latest Space Shuttle News​
Technicians have opened Endeavour's airlock hatch, ready for the astronaut's spacewalking suits to be checked out on Thursday... ("Are they still there? Yep. That's OK then".)

Also, the shuttle crew are reviewing procedures for the missions' spacewalks.

The Flight Readiness Review for Endeavour's flight to the International Space Station will be held on Tuesday, April 19. NASA managers will announce the official launch date during a briefing at the conclusion of the meeting.
Click to expand

At the moment, the planned launch date is 29th April, but the official launch date will only be announced on Tuesday 19th April. 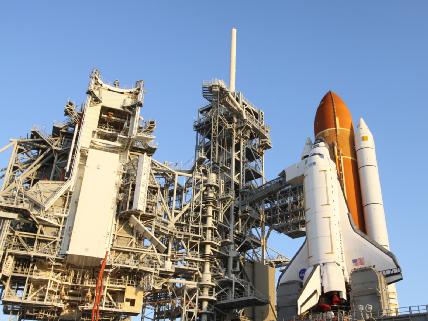 all since then really in terms of manned missions

Supporter
Tomorrow we will all learn the date of the launch.

However, the official launch date will be announced tomorrow...

NASA managers will meet Tuesday at Kennedy for a flight readiness review. An official launch date will be announced during a news briefing after the conclusion of the meeting.
Click to expand 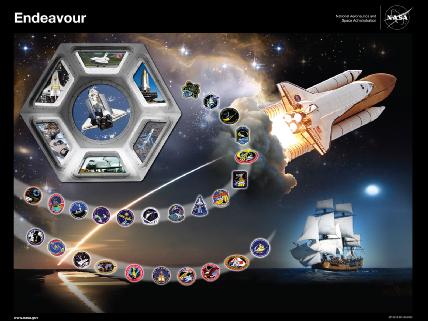 Space shuttle Commander Mark Kelly and his five crewmates are scheduled to begin a 14-day mission to the International Space Station with a launch at 3:47 p.m. EDT on Friday, April 29, from NASA's Kennedy Space Center in Florida. The STS-134 mission is shuttle Endeavour's final scheduled flight.

The launch date was announced Tuesday at the conclusion of a flight readiness review at Kennedy. During the meeting, senior NASA and contractor managers assessed the risks associated with the mission and determined the shuttle and station's equipment, support systems and personnel are ready.
Click to expand

Friday night shuttle party!! My social calendar is free that evening so I shall be viewing on my laptop. Could this be the final ever shuttle mission or is there another one thats planned to be the historic last launch?

Some more knowledgeable than I could probably give you the exact answer but it's something to do with a certain amount of "stall time" that they have built in should any problems arise and that is the optimum time to hit their launch window what with the planet spinning - no use shooting the shuttle up and then playing catch up with what they are aiming at.

F1Yorkshire said:
Friday night shuttle party!! My social calendar is free that evening so I shall be viewing on my laptop. Could this be the final ever shuttle mission or is there another one thats planned to be the historic last launch?

As things stand at the moment, there is one more Shuttle mission planned in June 2011, so this should be the penultimate flight. But, you can never be absolutely sure about it, so it's definately worth watching this launch "just in case" it's the last!

(This is the last Endeavour launch, but Atlantis is scheduled for launch in June. Dates and links will be posted on CTA at the appropriate time.)

You should be able to watch the launch live on-line here >> NASA Tv
All previous launches have been available on this link (at the moment, there's a variation of live press conferences and later this week, there will be live footage of the shuttle Endeavour being prepared..)

Ooops, sorry. The about quote should read 8.47 BST.... I keep forgetting we're now in summer time!

Not a Brown Dwarf but a Rogue Planet